Most Americans express some concern about the growing immigrant population in one way or another, but the nature of those concerns vary and are expressed with varying intensity by different segments of the population. Competition for jobs, the erosion of traditional American values, the costs to local government and the threats of terrorism and crime are all sources of immigration-related concern to some Americans, but none of these is a dominant or primary cause of worry. And on virtually every one of these points, a substantial share of the population takes a positive view of immigrants or finds no cause for concern.

For example, when asked to choose between two contrasting statements about immigrants – one which says that they represent a burden to the country because they take jobs, housing and health care; the other saying that immigrants strengthen the country through their hard work and talents – the public is divided. Just over half (52%) say that immigrants are a burden, but 41% say they strengthen the country. However, the percentage saying that immigrants are a burden is higher now than at any time since 1997. In five other surveys taken since September 2000, the share of the population expressing that view had been 44% or less.

Both whites (55%) and blacks (54%) are more likely than Hispanics (29%) to see immigrants as a burden, though attitudes are by no means uniform within any of these groups.

Views also vary according to levels of education. For example, a majority of whites with a four-year college degree (56%) say that immigrants strengthen the country through their hard work, while more than a third (37%) says that they are a burden. Whites with less than a baccalaureate education split the opposite way, with 63% seeing immigrants as burden and 30% saying that they strengthen the country. Similar, but less pronounced, differences are apparent among non-whites of differing levels of education.

Perceptions about one’s personal economic situation also correlate with attitudes towards immigrants. Those who say their personal finances are only fair or poor express a negative attitude toward immigrants; 58% view them as a burden, compared with 36% who say they strengthen the country. People who rate their finances as excellent or good are divided (44% burden/48% strengthen). Religion is significant too. Among white evangelical Protestants, for example, 64% see immigrants as a burden, compared with 56% of white Catholics and 52% of white mainline Protestants. There are also differences according to political ideologies, with 58% of conservatives seeing immigrants as a burden, compared with 42% of liberals and 52% of moderates who feel this way. 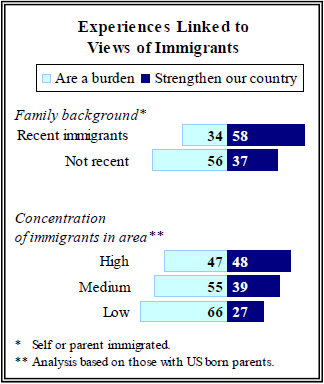 With respect to immigration’s social impact, Americans are about evenly split between those who say the growing number of newcomers from other countries threaten traditional American customs and values (48%) and those who say that the newcomers strengthen American society (45%). The same basic differences by race, education, perceptions of economic well-being, religion and political ideology are apparent in responses to this question as for the measure of economic and fiscal concerns. And here again, the people who live in places with the sparsest immigrant populations are most likely to express concerns.

A combined total of 63% express concerns over immigration either in response to the question about threats to American values or to the question about being a burden on jobs, housing and health care. But only about four-in-ten (37%) of all respondents voiced concerns about both of these threats and burdens. This suggests that while concerns are widespread, they are not uniform – and that different people find different reasons to be concerned. 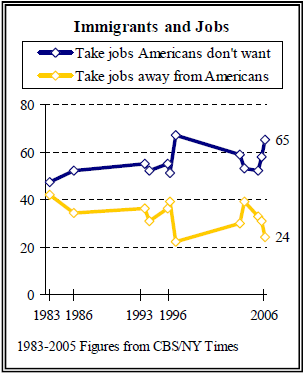 The extent of concern over immigrants’ impact on jobs may be mitigated by perceptions about the kinds of work they perform. Nearly two-thirds of respondents (65%) say that immigrants mostly take jobs that Americans don’t want, while a much smaller number, just 24%, say the newcomers mostly take jobs away from American citizens. Only once before in the past two decades – in 1996 – have views on this question been as lopsided as they are now. 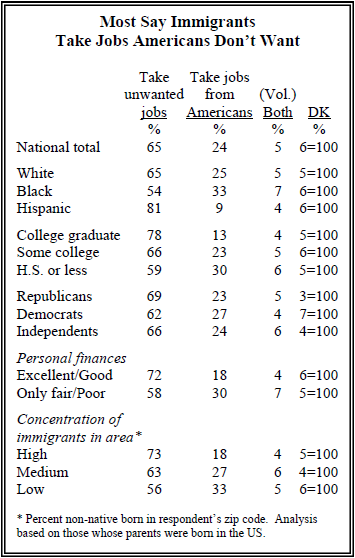 A majority of respondents in every part of the country and across all major socio-economic, political and religious groups say that immigrants mostly take unwanted jobs. But there are some differences in the extent to which people in different groups hold this view. More Hispanics (81%) see immigrants as taking unwanted jobs than do either whites (65%) or blacks (54%). Education is also a factor. For example, among whites, 79% of those with a college education see immigrants as taking unwanted jobs, while 59% of those who do not have a baccalaureate degree hold this view.

Americans express a mix of views about the impact of immigration on government services and budgets. A majority (56%) says that most recent immigrants do not pay their fair share of taxes, but a similarly large share (60%) say that immigrants moving into their communities have not made much of a difference in the quality of local government services. 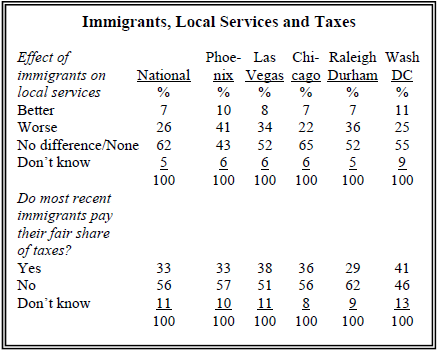 Most Americans (60%) say that the immigrants moving into their communities in recent years have not made much of a difference in the quality of their local government services, while about a quarter (26%) say that immigrants have made those services worse and 7% say they have made them better. With only small variations, this same basic judgment about the impact of immigration on local government services is expressed by all segments of the population.

Hispanic Latino DemographicsImmigrationImmigration TrendsPopulation TrendsPopulation GeographyUnauthorized ImmigrationWork and EmploymentRace and EthnicityImmigration AttitudesPolitical Attitudes and ValuesCitizenshipPopulation ProjectionsDiscrimination and Prejudice
Defining generations: Where Millennials end and Generation Z begins
25% in U.S. see at least some truth in conspiracy theory that COVID-19 was planned
Are you in the American middle class? Find out with our income calculator
Americans Who Mainly Get Their News on Social Media Are Less Engaged, Less Knowledgeable
Americans Fault China for Its Role in the Spread of COVID-19