The key group for dropout behavior is the larger group of recently arrived immigrant youths who numbered about 560,000 in 2000. By definition, “recent arrivals” came to the United States in 1992 or later and hence they arrived here no earlier than age 7. On average, these youths arrived at 12 years of age and some did not migrate to the United States until age 17. Recently arrived youths received a significant segment of their early schooling in schools outside the United States. Their current outcomes are not simply a reflection of their experience in U.S. schools, since they clearly were educated abroad in their early school years. Some of them have never been enrolled in U.S. schools.3 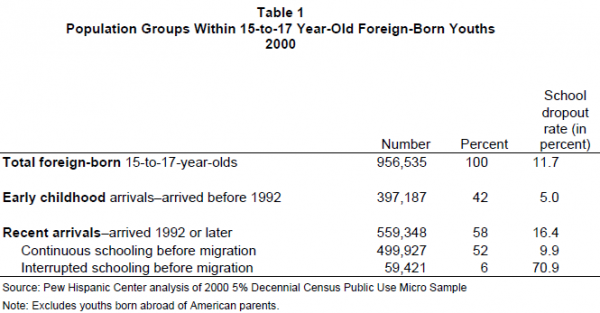 It is critical to further break down the 560,000 recently arrived immigrant youths. Some had schooling difficulties before they migrated to the United States. The Census reveals the highest grade of school that a youth has completed, and we can compare the grade that a youth has completed to the age at which he or she migrated to the United States in order to infer whether the youth made normal progress in school before migrating. For example, consider a youth who arrives in the United States at age 15. If the youth made normal progress in school abroad, we would expect him or her to have at least an eighth-grade education.4 If he or she has completed less than the eighth grade, the immigrant was not making normal school progress abroad by U.S. standards. On this basis, about 60,000 recent arrivals had schooling difficulties before migration in that they were not keeping up in school abroad. This small group of youths constituted 6 percent of all foreign-born 15-to-17-year-olds and 11 percent of recent arrivals. 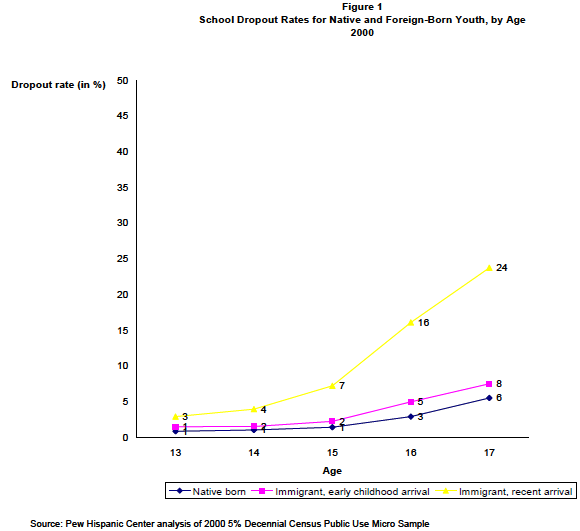 Next: IV. Most Early Childhood Arrivals are in School
← Prev Page
Page1Page2You are reading page3Page4Page5Page6Page7Page8
Next Page →