More migrants come to the United States from Mexico than from any other country, and Mexicans comprise 30% of the total foreign born population and 58% of the Latino foreign born. In order to explore views among Mexicans who are not now migrants, the Center has been conducting a series of monthly surveys in Mexico on topics related to migration since the beginning of 2005. This is the first report on those surveys. The data for each survey was collected through household interviews of adults conducted in 120 locations across the country. The interview sites were chosen through a well-established process designed to produce a nationally representative sample. A sample of 1,200 people was interviewed for each of the two surveys cited here, and the results for the total population have a margin of error of plus or minus 3%. All of the fieldwork was conducted by Consulta Mitofsky, a public opinion polling and social science research firm headquartered in Aguascalientes and Mexico City, as part of its monthly omnibus survey of the Mexican population, the Ómnibus Mensual ABC. Findings are presented here from two surveys. The first was conducted from February 11 to 19, 2005 and the second was conducted from May 13 to 17, 2005. The same questions were asked on each survey, and both were conducted with the same methodology. But, they are two separate polls with entirely different samples.

The Inclination to Migrate

The survey findings show that a wide swath of the adult population in Mexico—nearly70 million people by current estimates—has some inclination or desire to migrate to the United States. More than four in ten of the respondents in both the February and May surveys answered positively when asked, “If at this moment, you had the means and opportunity to go to live in the United States, would you go?” [Si en estos momentos usted tuviera la manera y la oportunidad de irse a vivir a los Estados Unidos, ¿usted se iría?] (See Figure 6). Slightly more than two in ten Mexicans in both surveys responded positively when asked, “And would you be inclined to go work and live in the United States without authorization?” [Y, ¿estaría usted dispuesto a irse a trabajar y vivir en los Estados Unidos sin autorización?] (See Figure 7). 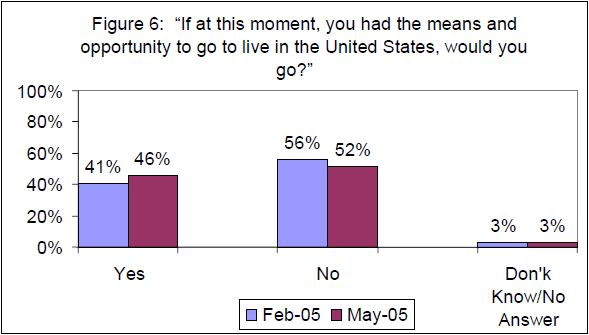 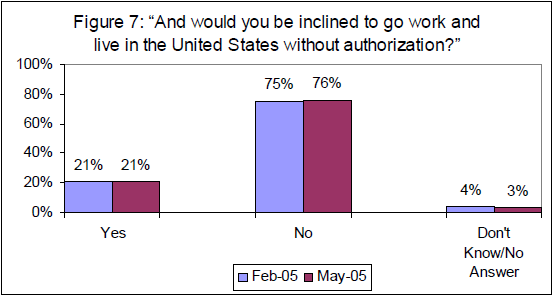 The willingness to migrate is higher among men than women and among the young than the old. This sentiment is distributed almost evenly across income ranges, and significant shares of well-educated Mexicans and those who live well beyond poverty also say they would come here if they could (See Table 8). These findings suggest that simple economic or social status alone is not the primary determinant of whether an individual is willing to consider migration. Rather, this survey data reinforces a substantial body of research literature which shows that the decision to migrate is influenced by the workings of family networks, perceptions of relative economic opportunity and other factors aside from socio-economic status.

Differences in the willingness to migrate according to respondents’ levels of education suggest the effects of economic expectations as opposed to absolute poverty. Mexicans with the lowest levels of education—primary school or less—are not necessarily the most likely to migrate. As a result of improvements in Mexico’s public education system in recent decades, adults who never got beyond a primary education are now concentrated among the middle aged and the elderly. Migration is most typically an activity of young adults who in Mexico are better educated than their elders on average. As a result, the educational profile of Mexican migrants to the United States has been improving over the past 40 years or so. 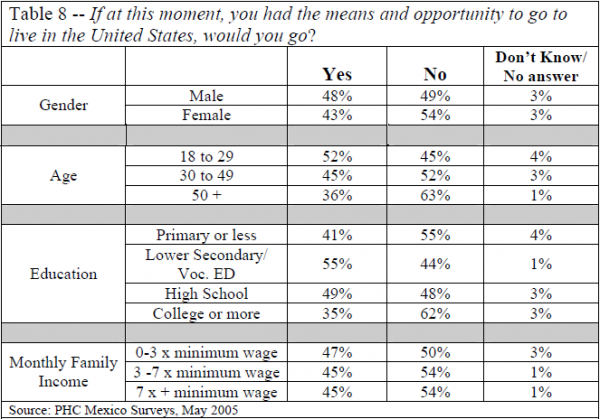 The survey data suggest that Mexico’s improvements in education have not stemmed the inclination to migrate so much as shifted up from those with barely a primary education—typical in the mid-20th century—to persons with some secondary education and even the college educated. The disposition to migrate is highest among those who have completed secundaria, a lower form of secondary education that often focuses on vocational training and does not qualify a student for bachelor’s-level college studies. The next highest educational category in willingness to migrate is Mexicans who completed preparatoria, which is the equivalent of a U.S. college-prep high school education. These individuals have benefited from improvements in the Mexican educational system, but their willingness to migrate in large numbers suggests that they have not yet benefited from an expansion of economic opportunities commensurate to their skills.

Proposals for a temporary worker program of the sort proposed by President Bush find widespread acceptance as a potential means of migration in Mexico. Two-thirds of Mexican adults (67% in February and 71% in May) answered positively when asked, “Thinking of your relatives and friends, do you think they would be interested in going legally to work in the United States through a temporary work program on the condition that they return at the end of several years?” [Pensando en sus parientes y amigos, ¿ cree usted que les interesaría irse legalmente a trabajar en los Estados Unidos mediante un programa de trabajo temporal a condición de regresar al cabo de algunos años?] (See Figure 8). Half of Mexican adults said they themselves would go, answering positively to the follow-up question, “And you, would you be inclined to go to the United States through a work program of this type?” [Y usted, ¿estaría dispuesto a irse a los Estados Unidos mediante un programa de trabajo de este tipo?] (See Figure 9). As with the questions on the inclination to migrate, these positive responses were distributed across all segments of Mexican society although again in greater percentages among males, the young and people with some secondary education. 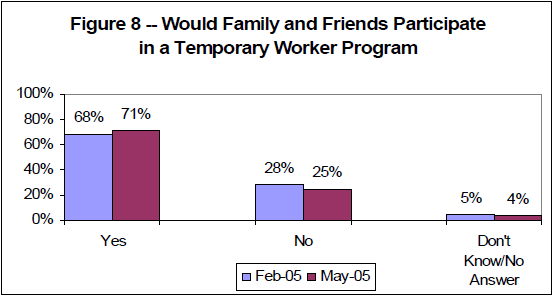 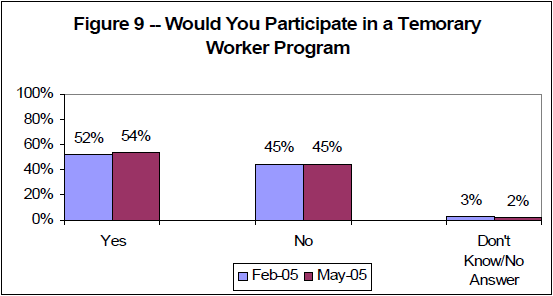 Attitudes toward Immigrants and Immigration Policy: Surveys among Latinos in the U.S. and in Mexico II. The Views of U.S. Hispanics
III. Attitudes toward Migration in Mexico
The Inclination to MigrateTemporary Worker Programs