Since December 2002 the Pew Hispanic Center has conducted or collaborated on four surveys of the Latino population in the United States that have asked questions about immigration, immigrants and immigration policy. An earlier survey conducted by The Washington Post in partnership with the Kaiser Family Foundation and Harvard University in October 1999 adds further depth to this series. All of the surveys were conducted by telephone in both Spanish and English using Random Digit Dialing (RDD) methodology. Fieldwork for all of the surveys was conducted by International Communications Research (ICR) of Media, PA. The results of responses to immigration-related questions from all these surveys can be found in Appendix A of this report.

As with many other issues, views on immigration matters are not uniform across the entire Hispanic population, and the most consistent and significant differences arise in contrasting the attitudes of Latinos born in the United States with those born outside the country. These differences are especially significant regarding policy matters because the native born make up a much larger share of the registered voters than of the total Hispanic adult population. According to the November 2004 Current Population Survey (CPS), which is conducted by the Census Bureau, the native born made up 44% of the total Hispanic adult population and 74% of Latino registered voters. In the current PHC survey 37% of all respondents were native born and 79% of registered voters.2 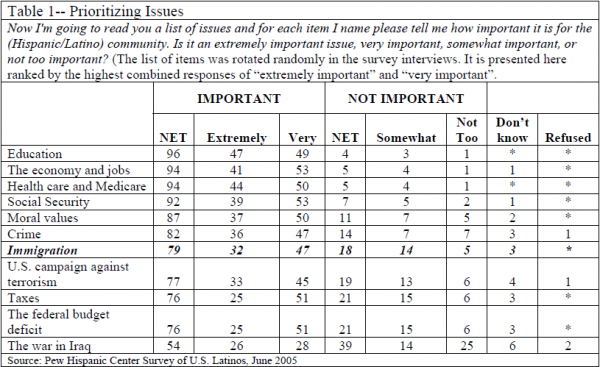 The prioritization of issues by Hispanics in the current survey was virtually identical to that in responses to a similar question asked in the 2004 National Survey of Latinos: Politics and Civic Engagement which was conducted by the Center in collaboration with the Kaiser Family Foundation. That survey, released in July 2004, asked the question in the context of the presidential campaign then underway. Then, as now, education, jobs and health care far outpaced immigration for all Latinos as issues of importance.

Latinos have an overwhelmingly favorable attitude toward immigrants, and their views are much more positive than those of the general population. The current survey asked respondents to choose between two starkly different statements characterizing immigrants, and 80% picked the favorable option (See Table 2). In contrast, a survey conducted in December 2004 by the Pew Research Center for the People and the Press, which like the PHC is a project of the Pew Research Center, asked the same question of a sample representative of the entire U.S. adult population and 45% picked the favorable statement. In this regard, the views of native-born Latinos are less positive (65% chose the favorable statement) than those of the foreign born (89%).

When asked about illegal or undocumented migrants, a clear majority of Latinos expresses a positive view although by a significantly smaller margin, and again the attitudes of the native born and the foreign born diverge. In response to a question about the economic impact of unauthorized migration, 68% of Latinos in the current survey said that illegal or undocumented migrants help the economy by providing low cost labor while 23% said that they hurt the economy by driving wages down (See Table 3).

Views were more narrowly split among native-born Latinos (55% help vs. 34% hurt) than among the foreign born (76% vs. 15%). The highest shares of negative views were among those of advanced middle aged and the higher income ranges of the middle class (See Figures 1 and 2). Among Latino registered voters, 62% said unauthorized migrants help the economy while 29% said they hurt. The Center has asked this question in four surveys since 2002, and the pattern of the responses has been similar. 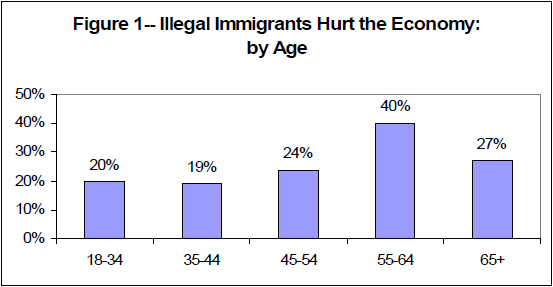 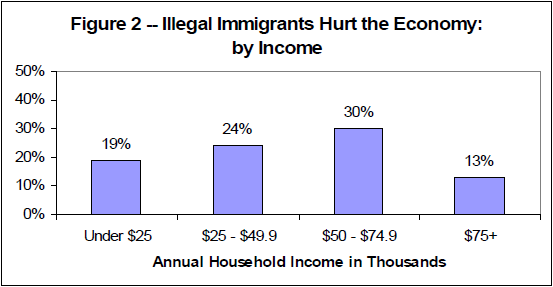 Less than a third (31%) of Latinos think that the United States should increase the number of legal immigrants from Latin America while a majority says that the flow should be kept the same (43%) or reduced (13%) (See Table 4). The differences between the native and foreign born are small on this score, and similar questions in past surveys have produced similar results.

Earlier this year Congress passed and the President signed the REAL ID Act which in effect requires states to verify that an applicant is a U.S. citizen or a legal immigrant before granting them a driver’s license. Since the terrorists attacks of September 11, 2001 all states have considered similar legislation. Currently, 11 states do not require proof of lawful presence in the United States, according to the National Immigration Law Center.

Latinos are more closely split on drivers’ licenses laws than on any other major aspect of immigration policy, and the differences by nativity are the most substantial. While 41% of all Latinos say they approve of such laws, 55% say they disapprove. Among the native born 60% approve and 36% disapprove. The balance of opinion goes the other way among the foreign born with 29% approving and 66% disapproving (See Table 5). Given the predominance of native-born Latinos among the Latino registered voter population, it is not surprising that 53% of Latino registered voters approve of the restrictions while 43% disapprove. Attitudes also vary significantly by age and income (See Figures 3 and 4). In addition, this issue produces a rare difference by gender with 45% of males approving of the laws compared to 36% of females. 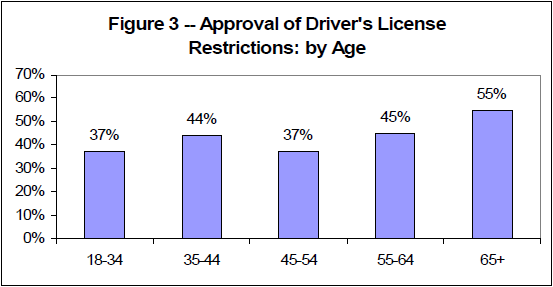 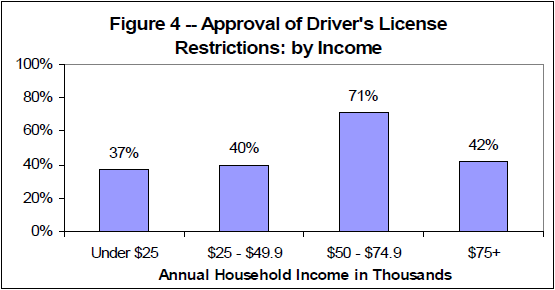 Two major options have developed in Congress for dealing with the unauthorized population now living in the United States. One would create means for illegal migrants to gain legal status, remain in the country permanently and eventually become U.S. citizens. The other, following the preferences outlined by President George W. Bush in January, 2004 would allow the unauthorized to remain in the country legally as temporary workers for several years on the condition that they eventually return to their home countries. Both proposals draw support from a majority of Latinos but approval of permanent legal status (84%) is much higher than for a temporary worker program (56%) (See Tables 6 and 7). Virtually the same responses were given when Latinos were asked about these options last year.

PHC surveys have examined Latino views on four aspects of immigration policy: the size of legal immigration flows, legalization programs, temporary worker programs and driver’s license restrictions. In each case attitudes towards immigration and immigrants appear to be an important but not determinative factor. Views among the native born and the foreign born often differ significantly. But, for both groups, assessments of policy options appear to involve more than their underlying views as to whether immigrants are a positive or a negative factor in American life. These findings clearly indicate that in a policy debate Latinos will not automatically or unanimously adopt what might be commonly perceived as the pro-immigrant position. The survey data also suggest that the distribution of views on a policy proposal among Latinos will be shaped by the proposal’s merits, the persuasiveness of advocates for and against, as well as other factors in addition to Latinos’ general attitudes towards migration.

Data from PHC surveys taken over the last three years shows that a significant minority of Latinos, especially among the native born, expresses unease and even displeasure with current flows of migration. These sentiments, however, do not automatically translate into support for measures to reduce those flows. Nonetheless, on one of the most controversial and wellpublicized policy developments of the past few years—federal and state laws to prevent unauthorized migrants from acquiring drivers’ licenses, native-born Hispanics decisively break ranks with the foreign born to support the restrictions. Because the native born are three times more numerous among Latino registered voters, the views of this concerned minority could have an impact on future policy debates.

To reiterate the findings noted above, here are some of the major indicators of the size of this minority and the nature of its concerns from PHC’s most recent survey of U.S. Hispanics:

Native-born and foreign-born Latinos take contrasting views on a variety of issues like abortion and the war in Iraq, but immigration might be expected to produce more uniform attitudes.3 After all, many, perhaps most, native-born Latinos have family memories of a migrant ancestor and expressions of Hispanic identities often relate to migration. Indeed, a majority of native born Latinos consistently expresses favorable views of migrants, but a significant minority does not, particularly when it comes to the unauthorized. In repeated surveys, more than a third of the native born has said that illegal migrants hurt the U.S. economy by driving wages down, more than twice the share of the foreign born (See Figure 5). 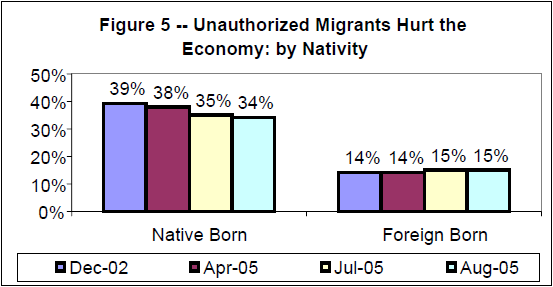 How do such views translate into attitudes on policy options? A clear majority of Latinos— though by a much greater margin among the foreign born—say that immigrants are a source of strength for the nation rather than a burden (See Table 2 above). However, less than a third of all Latinos in the most recent survey (31%) say that the number of legal immigrants from Latin America should be increased, and on this score the difference between the native born (28%) and the foreign born (33%) is not statistically significant (See Table 4 above). Thus, it appears that even among the foreign born, largely positive views of immigrants do not automatically translate into support for more generous immigration policies. The share of Latinos favoring increased legal immigration from Latin America is less than half the percentage that says that immigrants strengthen the country.

Some of the same ambivalence is evident on the negative side as well: Unfavorable views of unauthorized immigrants do not produce the same level of opposition to generous immigration policies. While 34% of the native born say that unauthorized migrants hurt the economy, only 15% oppose proposals that would grant those migrants legal permanent residence and eventual citizenship in the United States. Views on temporary workers programs are more difficult to assess in this context. Many Latino leaders, native and foreign born alike, have expressed disapproval of the idea because they consider it unworkable, unjust or insufficient. Other opponents of temporary programs take the opposite tack and prefer measures to push the unauthorized out of the country altogether. Thus those who publicly disapprove of temporary worker programs include both people who take positive views of migrants as well as those with negative views. It seems reasonable to assume that the same mix is evident to some extent in survey responses among Latinos.

This year’s debate over restrictions on drivers’ licenses appears to have struck a somewhat different chord. Proponents of the restrictions argued that requiring proof of citizenship or legal immigration status before granting a license is an important anti-terrorism measure and some see another benefit in discouraging illegal migration. Many pro-immigration and Latino advocates argued that the restrictions were unfair to migrants and ineffective as a security measure. Among both the foreign born and the native born roughly twice as many Latinos supported the restriction as said that the unauthorized hurt the economy.

Next: III. Attitudes toward Migration in Mexico
← Prev Page
Page1You are reading page2Page3
Next Page →