Across the United States, the racial and ethnic mix of the school-age and pre-school population is changing very quickly. Latinos, especially Latino immigrants, have higher birth rates than whites. (Edmonston and Passel, 1999) And because of a steady influx of young, foreign-born adults, a greater share of the Hispanic population is still in its prime child-bearing years than is the case with the white population. One result is that by 2000 the number of Hispanics ages 0 to 4 had increased by about 1.3 million over the previous decade while the number of whites in that age group had declined by about 1.3 million and the number of blacks was virtually unchanged.

The situation is somewhat different in the new settlement areas of the South. As noted above, all six states in the region are attracting new white residents, adding to the stock of potential parents. And the Latino population of the South’s new settlement areas still bears the hallmarks of a recent labor migration with its large share of unaccompanied males. That is likely to change as more women join the migration and the newcomers begin to form families. Then, the impact of Latino population growth will be felt forcefully in the schools.

This process has just begun. Like the Latino population as a whole, the Latino school-age population started very small and is growing very rapidly. In counties where Hispanic youngsters numbered in the tens in 1990, they numbered in the hundreds by the end of the decade. In counties where they numbered in the hundreds not long ago, they now number in the thousands. (See Appendix 5 for county-level data) The numbers are still relatively small, and Hispanics make up just a fraction of the school-age population in new settlement areas. But their impact on local schools is multiplied by two factors: Coming out of homes where Spanish is spoken, they often present special needs for English-language instruction. And because this is a new population that has emerged quite suddenly, many school systems do not have the programs in place to deal with those needs (TRPI, 2004).

To see the future impact on the schools one only has to look at the youngest kids, preschoolers ages 0 to 4. In this age group the Hispanic population increased by 382 percent between 1990 and 2000 in the six Southern states, and the number of Hispanics added was far larger than the number of whites (110,000 vs. 43,000). Latinos accounted for 43 percent of the people added to the population of these states in the pre-school age range. In the new settlement counties where Latino population growth is most intense the Hispanic population in this age group increased by an extraordinary 557 percent.

As with the growth of the Hispanic population in general, the impact on the schools in new settlement areas has to be measured not just in terms of the change but also in terms of the speed of change. Just 15 years ago, Latino youngsters were a negligible presence in the six Southern states, accounting as noted above for just 1 percent of the school-age population in 1990. By the 2001-2002 school year, Hispanics accounted for 4 percent of the school enrollment, but by the 2007-2008 school year they will make up 10 percent of all the primary and secondary school students in these six states, according to projections by the Western Interstate Commission for Higher Education. (WICHE, 2003) Having had just 184,000 Latino students enrolled in September 2001, the six Southern states will have an estimated 571,000 by September 2007, an increase of 387,000 Latino students. To put this in perspective, consider that the four traditional settlement states of California, Illinois, New York and New Jersey had a vastly larger Hispanic school enrollment—3.4 million in 2001—but will add only another 535,000 Latino students by 2007.

In addition, broader demographic trends that are already evident nationally will begin to play out more forcefully in the new settlement areas of the South. Lower fertility rates among whites will slow the growth of the white youth population. While Latino enrollment surges, white enrollment is projected to actually decline by nearly 26,000 students between 2001 and 2007 in the six states. Put another way, these projections show that Latino school enrollment in the six Southern states will increase by 210 percent while the number of all non-Hispanic students increases by a mere 2 percent. 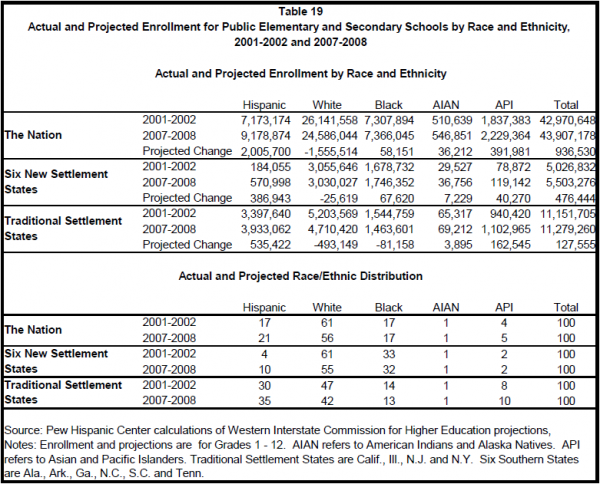 The impact of Latino growth in the school-age population is magnified because so many of these children have Spanish-speaking immigrant parents and thus require instruction in the English language. Whereas only about 18,000 Spanish-speaking children with limited English proficiency lived in the six new settlement states of the South in 1990, by 2000 the number had increased 261 percent to 64,000. Given that the Latino population growth in these new settlement areas is driven by international migration to a greater extent than elsewhere, it is not surprising that a greater share of Spanish-speaking children in the six Southern states reported not speaking English well or at all (24%) compared with the nation as a whole (15%) or the four traditional settlement area states (15%). (See Appendix 5 for county-level data)

The overall poverty rate in the six Southern new settlement states dropped from 15.8 percent to 14.7 percent between 1990 and 2000, a decline of 7 percent while it held steady nationwide, reflecting the robust economic performance of the Southeast. Meanwhile, however, the poverty rate among Latinos in these states increased significantly from 19.7 percent to 25.5 percent. That was a 30 increase reflecting the influx of young foreign-born Latinos filling lowwage jobs. Nationwide, the poverty rate among Latinos declined by 3.5 percent over the decade. This illustrates the consequences for both the new settlement communities and the new Latinos moving there of a kind of economic growth in which an increased reliance on low-skilled foreign workers is a key factor in the development pattern.

The relative intensity of the increase in Latino poverty is evident by contrasting the new settlement states of the South with the four traditional settlement states. In the six Southern states, Latinos accounted for three times as much of the growth in the poverty population (54%) than of the overall population (18%). In the traditional states, Latinos contributed less (61%) to the increase in the number of people in poverty than they did to the overall population (75%). 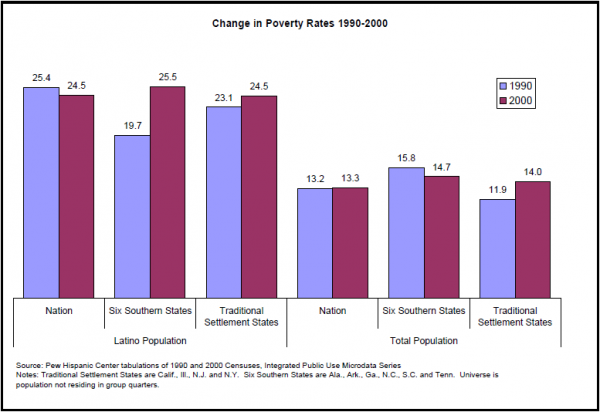 Given their economic status and the large number of recent immigrants among them, Hispanics nationally are more likely to be renters than homeowners. In fact nationwide, more than twice as large a share of the Latino population (52%) lives in rented housing as among whites (24%). This contrast is even more apparent in the new settlement states of the South, with an even greater concentration of low-income earners and recent arrivals in the Hispanic population. In the six Southern states, 65 percent of Latinos are renters compared with 21 percent of whites. Blacks in these states rent at a somewhat lower rate (44%) than they do nationally (51%).

Latino population growth has another distinctive impact on housing because Hispanics typically have larger households than either whites or blacks. This is particularly true in the new settlement areas of the South. Two factors explain this: Latinos have more children, and Hispanic households are more likely to include members of an extended family (beyond a husband, a wife and their children) or people who are not part of the householder’s family. The creation of households that include more than a nuclear family is a particularly prevalent phenomenon among recent immigrants.

In the Southern new settlement states Latinos accounted for 17 percent of the population increase between 1900 and 2000 but just 9 percent of the increase in the number of households. The average number of people in those Hispanic households (3.8) was significantly larger than in either white (2.4) or black (2.7) households in the six states.