Although some significant differences are apparent from city to city, a general portrait emerges of a young, disproportionately male, sample that has recently arrived in the United States (Table 9). Compared with the adult population of Mexico, the sample is relatively well educated, but it fares poorly in comparison with the general level of educational achievement of the U.S. population.

In the full sample, 57 percent of the respondents were male and 40 percent were female. The largest age group was the 48 percent of respondents who were 18 to 29 years old. Of the total, 43 percent said they had been in the United States for five years or less (Table 9). By comparison, only 34 percent of the full Mexican-born population living in the United States falls into the 18-to-29-year-old age range, and only 29 percent has been in the country for five years or less. (See Appendix 1.)

Some differences emerged when examining respondents who said they had no U.S. government-issued photo ID and those who said they had been in the country for two years or less. Both of these groups were notably younger than the average for respondents as a whole, with larger shares in the 18-to-29-yearold age range (Table 9). Demographic portraits of the samples from each of the seven cities where the survey was taken can be found in Appendix 2.

The survey respondents are better educated than the adult population of Mexico as a whole according to indicators compiled by the Organization for Economic Cooperation and Development (OECD 2004) (Table 8). The share of the sample that went as far as high school, for example, is three times as high as in the Mexican adult population. The sample is also somewhat better educated than the full population of Mexican-born adults living in the United States except at the high end of the scale. Compared with the migrant population, the Mexican population has a larger share of older adults who were of school age in the middle decades of the 20th century when educational achievement in Mexico was considerably lower than at the end of the century. And the survey sample is somewhat younger than the migrant population overall. The survey results are consistent with other evidence that the educational profile of Mexican immigrants has been improving in recent decades (Lowell and Suro 2002).

According to the OECD indicators, the share of the adult U.S. population that has completed high school or some form of higher education is three times as high as in the sample. 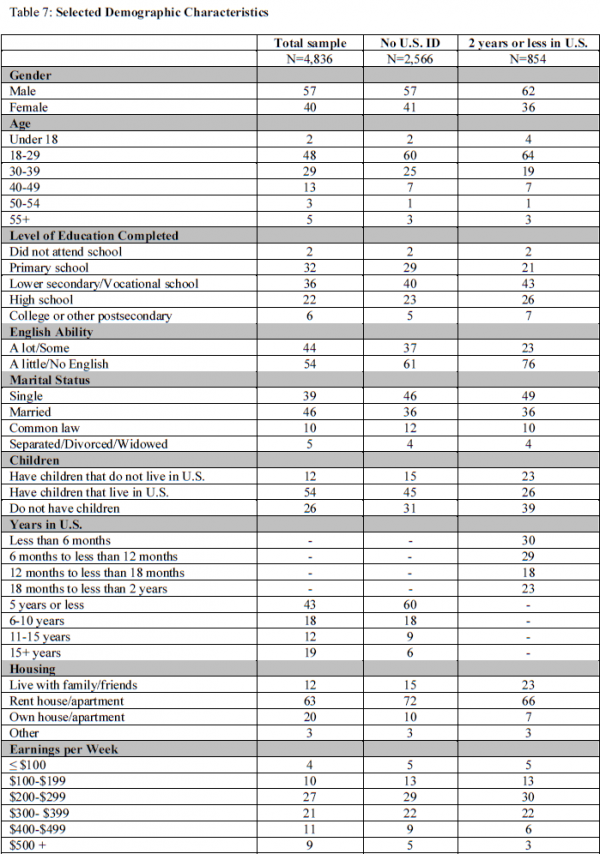