Assimilation is the process by which immigrants and their offspring adopt some values, beliefs and behaviors more characteristic of the U.S. culture than the culture of the countries from which they or their ancestors originate. This is neither a complete nor a uniform process, as some individuals change more than others and some attitudes change more than others.

Results from a series of national surveys conducted by the Pew Hispanic Center in partnership with the Henry J. Kaiser Family Foundation from 2002 to 2004 show clearly that the acquisition of English plays a central role in assimilation. In general, the attitudes of English-dominant Hispanics are much more similar to those held by non- Latinos than are the attitudes of Spanish-dominant Latinos. The correlation extends across a wide range of topics, ranging from attitudes on the acceptability of abortion to beliefs about an individual’s ability to control his or her own destiny. Language is found to contribute substantially to differences in attitudes even after controlling for many other factors, such as age, gender, education, income and country of origin.

Fatalism, or the belief that it does not do any good to plan for the future because you do not have any control over your fate, is widespread in Latin America, particularly among the poor. A majority of Spanish-dominant Latinos, overwhelmingly an immigrant population, espouse this view, but its prevalence is lower among Hispanics who are bilingual, and lower still among those who are English dominant. These two categories of Latinos, primarily a native-born population, have views on this topic similar to non-Hispanics. 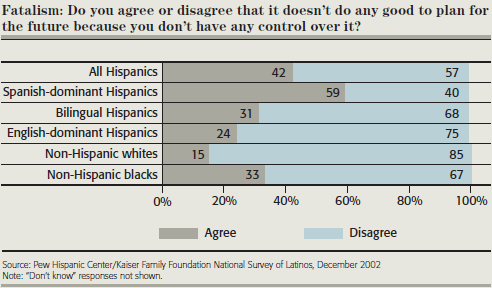 Assimilation involves not only personal beliefs but also perceptions of the host society. Asked whether discrimination is a problem that is preventing Latinos from getting ahead in the United States, only a small minority responds that it is not a problem at all. However, there is wide variation according to language use in the share of Latinos who say it is a major problem. The Spanish dominant are almost twice as likely as the English dominant to say discrimination is a major problem.

Aside from suggesting a process of changing attitudes, the survey responses on fatalism and discrimination also probably reflect real experiences. It seems safe to say that the greater pessimism of the Spanish dominant is partially a product of their lower socio-economic status and the fact that many are undocumented immigrants.

Some of the most perplexing — and most hotly debated — questions about the Latino population involve group identity. Will immigrants and their offspring hold their allegiance to their country of origin? Will Latinos come together as an ethnic group with a common sense of identity, political purpose and culture that is shared across nationalities and generations? Will they eventually become like the many descendants of European immigrants who shed national and ethnic identities in favor of seeing themselves as Americans?

“That link to a country of origin never fades entirely, even among Hispanics who have to look back at least to a grandparent to find immigrant ancestry. However, there is a clear trend in which “American” becomes a more favored identity among Latinos who speak more English and less Spanish and who trace their roots in the United States back a generation or more.”

The survey data suggest that the answers will come in a gradual process that plays itself out across generations and that language again is a central factor. In the Spanish-dominant, immigrant segment of the Latino population about two thirds of respondents identify themselves with their native lands. That link to a country of origin never fades entirely, even among Hispanics who have to look back at least to a grandparent to find immigrant ancestry. However, there is a clear trend in which “American” becomes a more favored identity among Latinos who speak more English and less Spanish and who trace their roots in the United States back a generation or more. Meanwhile, “Latino” and “Hispanic” are not the most favored terms in any segment of the population, although a significant share across the board chooses them. How these varied strands of identity affect the ways Latinos relate to each other and to the nation as a whole is still very much an open question.

Hispanics: A People in Motion II. Demographics III. Hispanics in the Labor Force IV. Hispanics in Schools and Colleges
V. Assimilation and Attitudes