The Hispanic population defies simple characterizations; there is a diversity of groups that differ not only by country of origin but also by immigrant status and racial self-identification. Having grown rapidly through immigration, its future dynamics will increasingly be driven by today’s young native born. Though concentrated in established urban areas, Latinos also retain a large rural presence and have recently spread to new areas of the country. 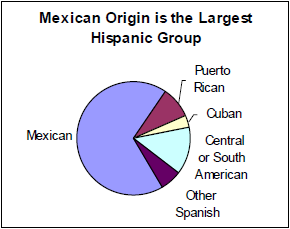 The 2000 Census documented Hispanics’ status as the largest US minority group several years before they had been forecast to reach that size. Latinos number 35 million or 12.5 percent of the U.S. population, very close to the share of African Americans but Latinos’ growth is more rapid. Although twothirds of Latinos are of Mexican origin, the remaining third includes at least 20 other national origin groups. While sharing much in common, each group is distinct.

Immigration has been key to Latinos’ population growth. Thirteen million “first generation” immigrants comprise 40 percent of all Hispanics. While the majority of Hispanic immigrants are legal residents, at least four of ten are not. Of course, almost all Puerto Ricans were born in the U.S. or its territories. Some 38 percent of Mexican-Americans were born abroad, as were about 60 percent of Cubans or persons of Central or South American origin. Hispanic immigrants have often opted not to become naturalized citizens, but with time, more are doing so. Twenty-one percent of Mexican and 60 percent of Cuban immigrants have naturalized.

If immigration fueled the Hispanic population to date, tomorrow it will be their children who drive growth. Ten million “second generation” U.S.-born children of immigrants make up 29 percent of all Hispanics. Another 11 million comprise the “third generation” (born to two native-born parents) and represent 31 percent of all Latinos.

The U.S. Census Bureau currently projects that by 2025 the Latino population will grow from 35 million to 61 million, at which point it will represent 18 percent of the U.S. population.

Hispanic immigrants are 36 years of age on average and this population will soon pass out of its family formation years. Second generation children of Hispanic immigrants are young, averaging just over 19 years old. Even the third generation is just 26 years of age on average. Third generation Latinos’ households are not as large as those of immigrants, but they are much larger than non-Hispanic households. As a result, Hispanic demography will increasingly be defined by the native-born.

The 2000 Census introduced a new multiracial question. In the past, about half of Latinos identified as white, with the balance identifying as “some other race,” and a small percentage as African American. Using the new census classification, a recent survey found about 63 percent of Latinos self-identified as “white alone,” and less than 30 percent identified as “some other race alone;” 5 percent identified as being of two or more races. While Latinos are likely to retain a strong self-identity, it is unlikely that they will be easily classifiable in the future. Hispanics also intermarry in significant numbers, with nearly 20 percent of Latinos marrying a non-Hispanic.

Both Geographic Concentration and Dispersion

Hispanics are highly concentrated; half live in California and Texas, with another 20 percent residing in five additional states with 1 million or more Hispanics: New York, Florida, Illinois, Arizona, and New Jersey. At the other extreme, 39 states each have less than 1 percent of all Hispanics. Over 90 percent of Latinos live in urban areas, compared to less than 80 percent of whites. Almost half reside in a central city, compared to 21 percent of whites. During the 1990s, however, there was an increasing movement of Hispanics to “nontraditional” areas such as North Carolina, Georgia, Iowa, Arkansas, Minnesota, and Nebraska where they make up more than a quarter of the population in some counties. Hispanics are more concentrated than other Americans, while at the same time more Americans will have Hispanics living nearby in the future.