As India’s economy has revived, its international trade and military posture around the world have grown. With the election of Narendra Modi, who has pursued an active foreign policy both within the South Asia region and around the world, India has emerged as an increasingly important player on the world stage. For the most part, Indians are moderately supportive of India’s global engagement. Many, however, voice no opinion about such global affairs, again a reminder that for large numbers of Indians living in disparate rural villages or vast urban squatter settlements, international relations are quite removed from the concerns of their daily lives. 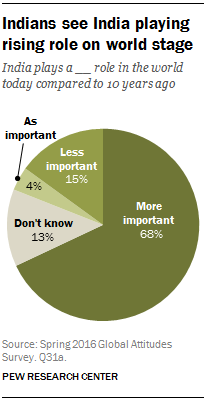 Indians acknowledge their country’s growing international stature. About two-thirds (68%) say India plays a more important role in the world today compared with 10 years ago. Only 15% believe India plays a less important role. Notably, only 13% express no opinion, suggesting that most of the public has views on general international issues involving pride in country, even if they may not express views about the specifics of foreign policy. There is no generation gap in this perception of India’s eminence. Young, middle-aged and older Indians all see their nation as more important today. And strong majorities of both Indians with only a primary school education or less and those with some college or more think India is a bigger player in the international arena than it did a decade ago.

Publics in a few other countries generally have a similarly positive take on India, though a somewhat less enthusiastic one. But there is no appreciable evidence in these countries of a positive bounce in India’s stature thanks to Prime Minister Modi’s extensive public diplomacy in his first two years in office.

Roughly half or more of the public in Canada (52%), Australia (53%) and Japan (54%) hold a favorable view of India. This positive opinion is little changed in Australia, but down 9 percentage points in Japan since 2015. And the Japanese public’s assessment of India is down 16 points since its recent high point in 2012, during the government of Modi’s predecessor, Manmohan Singh of the Indian National Congress party.

In the wake of Sino-Indian territorial disputes and growing economic competition, only 26% of Chinese hold a favorable view of India. About six-in-ten Chinese (61%) express a negative opinion. 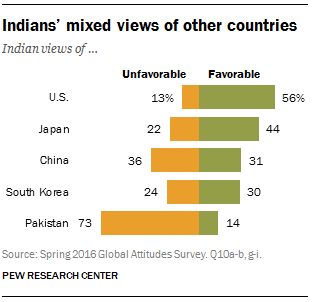 For their part, Indians hold mixed views of other major countries. This may in part be explained by the fact that roughly a third or more of those surveyed hold no view at all of many other nations.

By a margin of two-to-one (44% favorable to 22% unfavorable), Indians hold a positive view of Japan. This is relatively unchanged from previous years.

Just 30% of Indians give a thumbs-up to South Korea, while 24% have an unfavorable opinion. But most Indians (45%) hold no view at all of the country.

While many Indians may not express views of other countries, most do have an opinion about neighboring Pakistan – and such views are uniformly negative. India has fought several wars with Pakistan since the 1947 partition of the former British Indian Empire into Muslim-majority Pakistan and Hindu-majority India. Nearly three-quarters (73%) of Indians hold an unfavorable view of Pakistan. This includes 55% who have a very unfavorable opinion. Overall negative sentiments are up 9 points since 2015.

Nevertheless, a majority (56%) of Indians favor further talks between India and Pakistan to reduce tensions between the two countries. Again, on such practical international issues, most Indians have some opinion. This desire for dialogue between New Delhi and Islamabad is shared across most demographic groups. Talks enjoy greater support among Congress party backers (63%) than with BJP adherents (54%).

Indians hold China in low regard and are concerned about the competitive and strategic challenge posed by Beijing. Just 31% of the public holds a favorable view of China, while 36% voice an unfavorable opinion. However, 32% of Indians voice no view at all.

A plurality (41%) of people with a primary school education or less express no view of China, while only 8% of those with some college education or more voice no opinion, underscoring the impact of education on public views of the world around them.

Such negative views are coupled with concern about specific problems Indians believe are linked to Beijing. Seven-in-ten believe that China’s economic impact on India is a problem, including 45% who say it is a very serious problem. 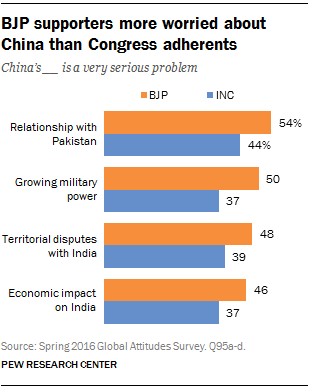 Roughly six-in-ten (61%) Indians with some college education are very worried about the competitive challenge posed by China. Just 38% of people with a primary education or less are similarly concerned. However, just 2% of those with at least some college respond “don’t know” to this question, compared with 28% of those with a primary education or less. People who identify with the Bharatiya Janata Party (BJP) are more troubled by China’s economic impact on India (46%) than are Congress party supporters (37%).

Nearly half (48%) of Indians think China’s relationship with Pakistan poses a very serious problem for India. Another 21% see this as a somewhat serious challenge. BJP backers are more critical than Congress adherents.

Fully 69% hold the view that China’s growing military power is a problem for India, including 46% who say this is a very serious issue. Half of those who identify with the BJP are very worried, but only 37% of Congress supporters share that intense concern.

Indians hold mixed views of other countries’ leaders, with many people voicing no opinion. A majority of Indians (58%) are confident in U.S. President Barack Obama to do the right thing regarding world affairs. This includes 34% who have a lot of confidence in him. But such overall public confidence is down 16 points from 2015. Indians with some college education or more are overwhelmingly confident in him (86%). 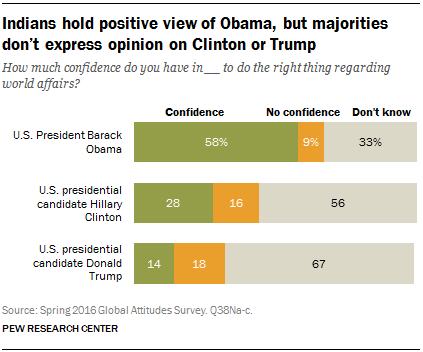 Views of the two principal candidates for the U.S. presidency in 2016 are marked by the large share of the Indian population that voices no view on the two contenders. Two-thirds of the public has no opinion of Republican presidential candidate Donald Trump. And a majority (56%) has no view of Democrat Hillary Clinton. Nearly three-in-ten (28%) have confidence in Clinton and 14% have confidence in Trump.

Chinese President Xi Jinping enjoys little recognition by or confidence from the Indian public. Fully 64% have no opinion about him. Just 15% express confidence.

Only 24% voice confidence in Russian President Vladimir Putin. Roughly six-in-ten (62%) express no view at all.

Indians do not need extensive knowledge about international issues to have a view about national priorities or the balance between attention to domestic and foreign concerns.

Indians are generally inward-looking in their overall posture toward the rest of the world. More than half (53%) say their country should deal with its own problems and let other nations deal with their own difficulties. Just 23% say India should help other countries deal with their problems.

At the same time, Indians demonstrate a commitment to their allies. About half (49%) hold the view that in foreign policy India should take into account the interests of its allies, even if it means making compromises. Just 28% believe that India should follow its own national interests in foreign policy, even when its allies strongly disagree. By about two-to-one (53% to 27%) BJP supporters favor such multilateralism over unilateralism. Congress party adherents are divided on India’s foreign policy posture toward its allies.

In line with their views on multilateralism, by more than two-to-one (40% favorable, 17% unfavorable) Indians have a positive view of the United Nations, the multilateral institution where India has long been a leader of what was once called the Non-Aligned Movement. But more than four-in-ten Indians (43%) voice no opinion of the UN.

India’s share of world exports has slowly risen from 0.8% in 2002 t0 1.7% in 2014. While small, it has more than doubled, and the government and business community have aspirations to play an even greater role.

By more than two-to-one Indians think this involvement in the global economy is a good thing because it provides the country with new markets and opportunities for growth (52%); only 25% say it’s a bad thing because it lowers wages and costs Indian jobs. As with other measures of public sentiment on international issues, just 3% of those with a college education or more voice no opinion, but 24% of people with a primary education or less have no view. 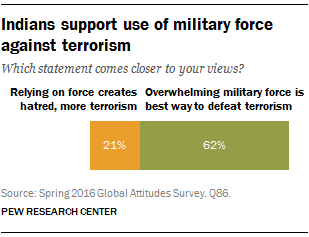 With roughly half (52%) the Indian public worried that ISIS poses a major threat to their country, about six-in-ten Indians (62%) believe that overwhelming military force is the best way to defeat terrorism around the world. Just 21% say relying too much on such force creates hatred that leads to more terrorism. 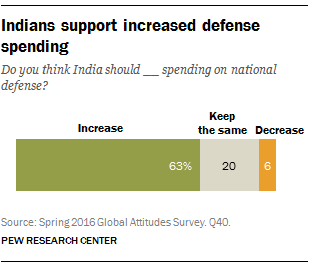 India and Modi: The Honeymoon Continues 1. How is India doing? 2. How is Modi doing?
3. How Indians see their place in the world
A China syndromeMixed views of foreign leadersIndia’s international role
Acknowledgments Methodology