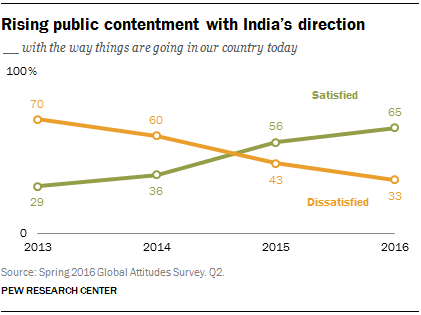 A growing number of Indians, roughly two-thirds (65%), are satisfied with the way things are going in their country. Such satisfaction is up 9 percentage points since 2015 and 29 points since 2014, in a survey taken before Prime Minister Narendra Modi’s Bharatiya Janata Party (BJP) came to power. In 2013, the last year of the previous government, just 29% of the Indian public was happy with the trajectory of their nation.

Current approval of the country’s direction is widely shared by men and women, by all age groups and education levels, and by people living in cities and in the countryside. And about seven-in-ten supporters of the BJP and more than half of backers of the Indian National Congress party (INC) are satisfied with the way things are going in India.

This general approval reflects public contentment with the state of the Indian economy, which grew by 7.6% in 2015 and is expected to grow by 7.4% in 2016, according to recent estimates by the International Monetary Fund, making India the fastest growing major economy in the world. By comparison, the Indian economy grew by only 5% in 2013. 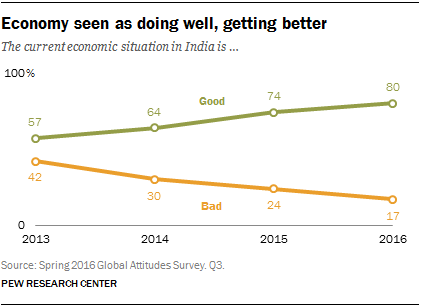 Notably, 42% of BJP supporters voice the view that the economy is doing very well, while only 26% of Congress adherents share such strong feelings. 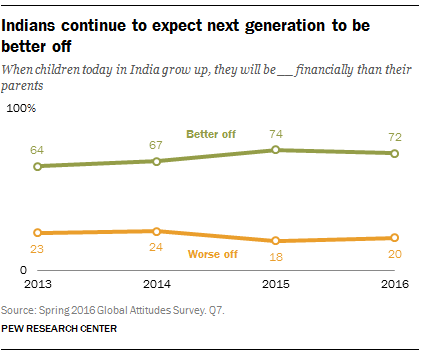 Views of the economy are a snapshot, subject to change, as the recent improvement in economic sentiment testifies. But people also see the economy as a bellwether of prospects for their children. Roughly seven-in-ten Indians believe that when today’s children grow up they will be better off financially than their parents. This faith in the future is consistent with last year, but up a bit from 2013, when it stood at 64%. People in rural areas are slightly more optimistic for the next generation than those living in urban environments (68% vs. 74%). 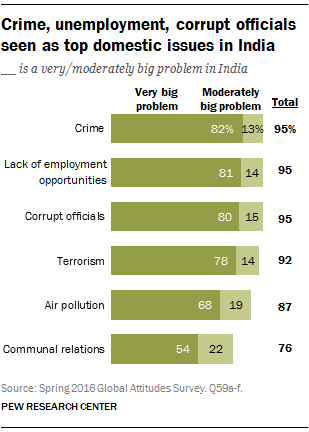 Despite satisfaction with the economy and the country’s direction, Indians are troubled by a range of problems, both domestic and foreign.

Roughly eight-in-ten Indians view crime (82%), lack of employment opportunities (81%), corrupt officials (80%) and terrorism (78%) as very big domestic problems. Concern about all four issues is down somewhat in the past year, with the biggest drop-off (11 percentage points) in the intensity of worry about crime. It is notable, however, that strong concern about crime and joblessness is simply returning to the level of public anxiety in 2014 and concern about corrupt officials is returning to 2013 levels.

Apprehension about terrorism, however, is down 10 points from 2013, the last time the question was asked. 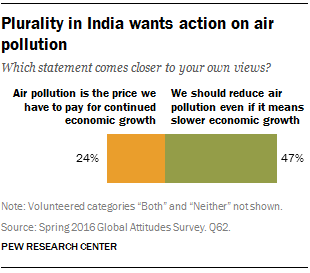 Air pollution exposure for the average Indian may now be worse than exposure for the average Chinese, contributing to as many as half a million premature deaths per year. About seven-in-ten Indians (68%) believe air pollution is a very big problem in their country. Such alarm is down a bit since last year, but up 16 points since 2014. Nearly three-quarters (73%) of city dwellers are very concerned about air pollution, while roughly two-thirds (65%) of those living in rural areas agree. The issue is of such concern that a plurality of Indians voice the view that air pollution should be reduced, even if it means slower economic growth (47%). Just 24% say air pollution is the price society has to pay for continued economic growth.

Communal tensions – between Indians of various religious faiths and/or different castes – have long plagued Indian society. The number of communal incidents in India increased slightly in 2015 after having dipped sharply from 2013 to 2014. Nonetheless, intense public concern about religious and caste troubles is lower than concern about other issues. Just over half (54%) express the opinion that communal relations are a very big problem. Notably, 63% of those in southern states say communal relations are very concerning, just 42% of those living in western India agree.

Indians express far less apprehension about international problems. About a fifth to roughly a third of respondents voice no opinion about various foreign issues, reflecting the reality that distant threats seem less compelling than challenges close to home. 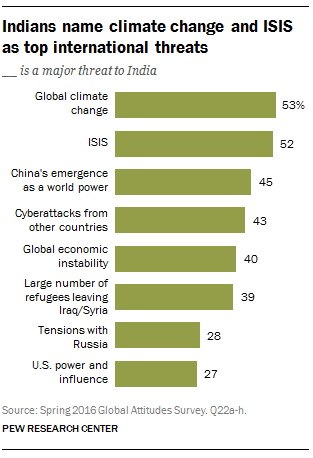 About half (53%) of the public sees global climate change as a major threat to India, sentiment that is unchanged from last year. Only 8% dismiss climate change as not a threat, while about a fifth (18%) see it as a minor danger or express no view (21%).

A comparable proportion (52%) voices the opinion that the Islamic militant group in Iraq and Syria known as ISIS is a major threat to India. There have been no major ISIS-led attacks in India, but over its history the country has experienced numerous incidents of international terrorism, a number of which originated in Pakistan. Few Indians (6%) dismiss ISIS outright as a threat, while 13% see it as a minor challenge for their country and more than twice that number make no judgment. A majority of BJP supporters (59%) are concerned about ISIS, as are 44% of Congress party adherents, though Congress supporters are more likely to express no opinion.

A little less than half of the public sees China’s emergence as a world power as a major threat to India. Just 6% say it’s no threat at all, while about a quarter believe Beijing’s rise is a minor challenge (23%) or have no opinion (25%).

Roughly four-in-ten Indians express major concern about cyberattacks from other countries (43%) and global economic instability (40%). And a similar percentage sees the large number of refugees leaving countries such as Iraq and Syria as a major threat.

Half (50%) of BJP supporters are troubled by the threat of cyberattacks, as are 35% of Congress party adherents. More than four-in-ten (44%) of those who identify with the BJP and roughly three-in-ten (32%) Congress party backers share a perception of the threat posed by refugees. However, it is important to note that on both of these issues Congress supporters are more likely to give no opinion.

Only about three-in-ten Indians consider tensions with Russia and U.S. power and influence to be major threats.

Next: 2. How is Modi doing?
← Prev Page
Page1You are reading page2Page3Page4Page5Page6
Next Page →

India and Modi: The Honeymoon Continues
1. How is India doing?
The challenges India faces
2. How is Modi doing? 3. How Indians see their place in the world Acknowledgments Methodology