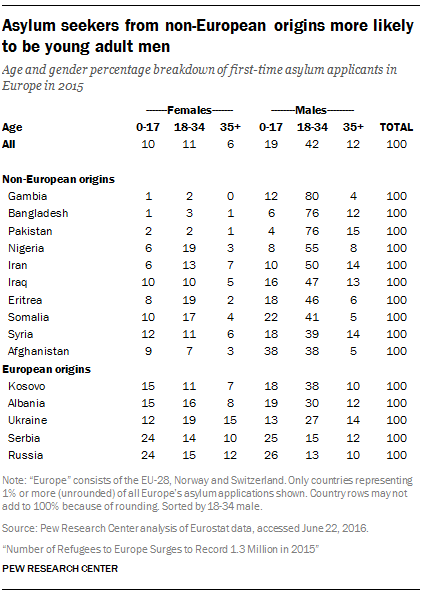 These age and gender patterns are largely consistent across some of the largest asylum seeker groups, including those from Syria, Iraq, Iran and Somalia. The large proportion of young males and comparatively smaller shares of young adult women and female children suggests that many refugees from these source countries are young men traveling alone. This situation seems especially likely in the case of asylum seekers from Pakistan and Bangladesh, among whom three-quarters were males ages 18 to 34 in 2015. By contrast, data suggest that asylum seekers from countries like Russia, Serbia and Ukraine tend to relocate as families: Fully 30% to 50% of asylum seekers from these countries were minors accompanied by adults.

Unaccompanied minors have been largely teenage boys, most from Afghanistan

Next: Acknowledgments
← Prev Page
Page1Page2Page3Page4You are reading page5Page6Page7Page8Page9Page10
Next Page →