Outside its own borders, neither Russia nor its president, Vladimir Putin, receives much respect or support, according to a new Pew Research Center survey. A median of only 30% see Russia favorably in the nations outside of Russia. Its image trails that of the United States in nearly every region of the world. At the same time, a median of only 24% in the countries surveyed have confidence in Putin to do the right thing in world affairs, and there is far less faith in the Russian leader than there is in U.S. President Barack Obama.

Opinions of Russia are more unfavorable than favorable in 26 nations. The strongest negative sentiment is in Poland and Jordan (both 80%). The former is a legacy of a long history of bilateral tensions. Public opinion in Jordan may be influenced by Moscow’s current support for the regime of President Bashar al-Assad in Syria, Jordan’s neighbor and the source of hundreds of thousands of refugees in Jordan. Anti-Russian sentiment is also particularly strong in Israel (74%), Japan (73%), Germany (70%) and France (70%).

Russia’s greatest support is in Vietnam (75%). But in only two other nations do about half or more of the public have a positive view of Russia: Ghana (56%) and China (51%).

In a number of countries, large segments of the public express no opinion about Russia. This includes more than half of those surveyed in Ethiopia and about a third or more in Pakistan, India, Burkina Faso, Tanzania, Senegal, Argentina and Peru.

Within the context of generally anti-Russian sentiment, views of Russia can differ between generations. Americans ages 50 and older are far more critical of Moscow (78% unfavorable) than Americans ages 18 to 29 (56%). The generation gap is similar in Canada: 69% negative among older Canadians compared with only 47% unfavorable among younger ones. There are 19-percentage-point differences in unfavorable views between these age groups in Spain (72% vs. 53%) and Australia (70% vs. 51%). 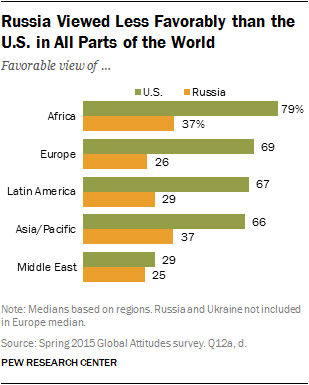 There is a notable partisan difference in views of Russia in France: While both major parties there have a negative view, more Socialists (78%) than supporters of the right-of-center Union for a Popular Movement (UMP) (67%) see Russia unfavorably. 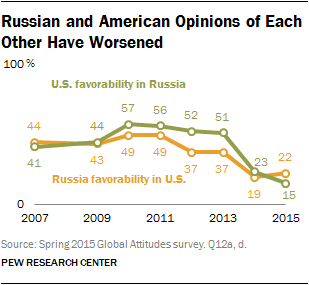 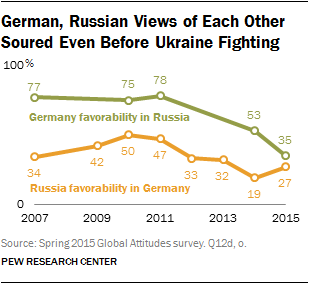 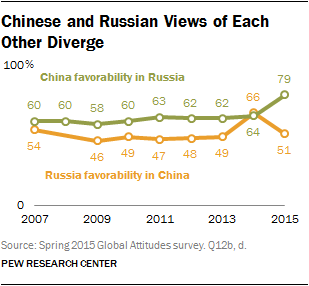 There has been a similar decline in Germans’ views of Russia, beginning before the 2014 fighting in eastern Ukraine. In 2010, half of Germans saw Russia favorably. By 2015, only 27% hold such views, although that figure is up from 19% in 2014, despite continuing tensions over Ukraine. Russians’ opinion of Germany has deteriorated even more. In 2011, 78% of Russians saw Germany in a positive light. In 2015, less than half that proportion (35%) voiced such sentiment.

Chinese views of Russia have also dipped in the past year. About half of Chinese (51%) have a favorable opinion of Russia, down from nearly two-thirds in 2014. But the Chinese public’s views of Russia have merely returned to their long-term norm after a one-year spike. Meanwhile, Russian views of China have improved markedly, rising from 64% in 2014 – roughly the level they had been at since 2007 – to 79%.

Putin’s Image Even Worse than That of Russia

In only two nations – Vietnam (70%) and China (54%) – do more than half the public have confidence in Russian President Vladimir Putin to do the right thing in world affairs. Among the 39 nations surveyed outside of Russia, a median of just 24% see him in a positive light. Nevertheless, Putin remains popular at home, with an 88% positive rating.

A median of 58% around the world hold a negative opinion about Putin. His strongest critics are in Spain (92% no confidence), Poland (87%), France (85%) and Ukraine (84%). Three-quarters or more in Western Europe and North America are also critical of Putin, as are majorities in the Middle East.

Opinions are more varied in Asia, Africa and Latin America, however. In the Asia-Pacific region, about eight-in-ten Australians (81%) hold a negative view of Putin, while seven-in-ten Vietnamese have a positive opinion. Seven-in-ten Venezuelans, but only about half of Peruvians (52%), voice a lack of confidence in Putin. And 45% of Kenyans have negative sentiments about the Russian leader, compared with only 16% of Ethiopians.

But views in Asia and Africa are in part a product of the fact that many people in those regions have no opinion of Putin: 56% in Pakistan, 52% in Ethiopia, 49% in India, 43% in Senegal and 42% in Indonesia say they don’t know how they feel about him.

In most parts of the world, views of Putin and views of Russia track closely. This is especially true in Africa, Asia and most of Latin America. There are, however, notable exceptions where Russian favorability exceeds confidence in Putin. In Spain, 25% have a favorable view of Russia while only 6% have a positive opinion about Putin. Similarly, in France, Venezuela, Peru and Ukraine, roughly twice as many see Russia in a positive light as have confidence in Putin. 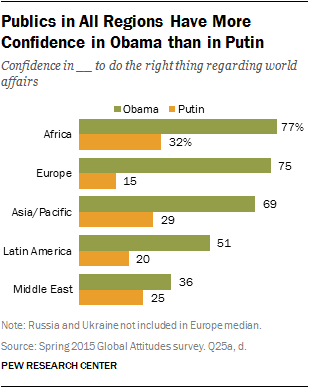 In all regions of the world, Putin’s image fares quite poorly compared with public perception of U.S. President Barack Obama. Three-quarters of Europeans have confidence in Obama to do the right thing in world affairs. Only 15% have such faith in Putin. By more than two-to-one, publics in Africa, Asia and Latin America trust Obama more than Putin. Only in the Middle East is confidence in Putin even close to confidence in Obama. And that is not because support for Putin is very high (25%), but rather because support for Obama is also quite low (36%). 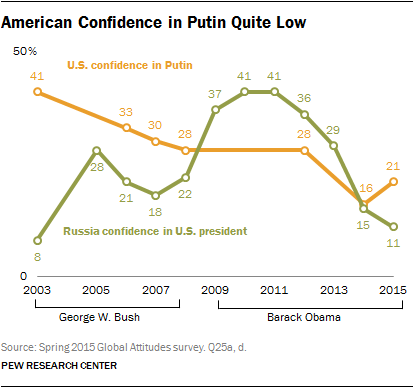 In the U.S., roughly one-in-five Americans (21%) have confidence in Putin’s handling of world affairs. This is about half the proportion who trusted him in 2003 (41%). Older Americans are particularly distrustful of Putin.

Meanwhile, Russian confidence in Obama is now at Bush-era lows. As recently as 2011, 41% of Russians had faith in Obama. In 2015, just 11% of Russians trust his handling of world affairs, comparable to their 8% confidence in U.S. President George W. Bush in 2003.

Russia, Putin Held in Low Regard around the World
Putin’s Image Even Worse than That of Russia
Methodology