Brazilians give President Dilma Rousseff dismal ratings for her handling of key issues, with only about a third or less saying they approve of the way she is handling corruption, crime, health care, public transportation, education, foreign policy, preparations for the World Cup, poverty and the economy. Yet, despite these low marks, Rousseff is viewed more favorably than her challengers in this October’s presidential election.

More generally, opinions about Rousseff’s overall impact are nearly evenly divided between those who believe the president is having a positive influence and those who say she is having a negative impact on the way things are going in Brazil. Four years ago, 84% said then-President Luiz Inácio Lula da Silva, Rousseff’s predecessor and supporter, was having a good influence on the country. Positive ratings of the impact of the national government, the police, the military and the media have also declined by double digits since 2010. 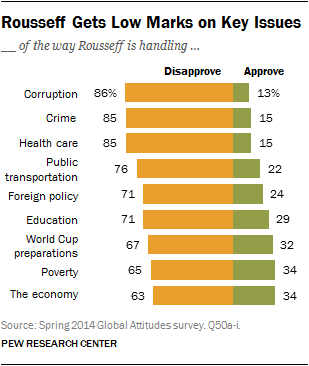 Brazilians overwhelmingly disapprove of the way their president is handling a long list of important issues facing the country. More than eight-in-ten give Rousseff low marks for her handling of corruption (86%), crime (85%) and health care (85%). Solid majorities also disapprove of the president’s performance on public transportation (76%), education (71%), foreign policy (71%), preparations for the World Cup (67%), poverty (65%) and the economy (63%).

Majorities across most demographic groups disapprove of Rousseff’s handling of key issues, but those with more education and higher incomes tend to be particularly critical of the president, as are those who live in urban areas.

Opinions of Rousseff’s overall influence on the way things are going in the country are more mixed than the high disapproval ratings of her handling of specific issues, but her impact is seen far more negatively than that of Lula at the end of his presidency.

About half of Brazilians (48%) say Rousseff is having a good influence and 52% say she is having a bad influence on the country. Four years ago, 84% believed Lula was having a positive impact on the way things were going, while just 14% offered a negative opinion.

Assessments of Rousseff’s overall influence on the country vary considerably across income and education groups. Majorities of lower-income (58%) and less-educated (56%) respondents say the president is having a positive impact. Opinions of those in the middle income group and those with at least some secondary education are mixed, while majorities among the more affluent (61%) and more educated (70%) say Rousseff is having a bad influence on the way things are going in Brazil. 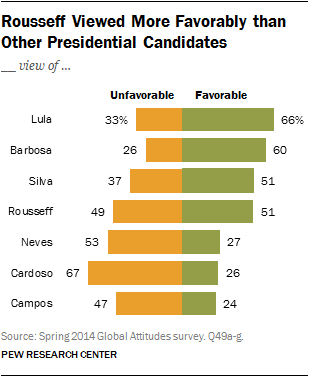 Despite her low approval ratings on every issue tested, Dilma’s favorability ratings are higher than those of her two challengers in the upcoming presidential election. About half of Brazilians (51%) have a favorable opinion of their president and 49% have an unfavorable view.

In comparison, about a quarter (27%) offer a favorable opinion of Aécio Neves, presidential candidate of the Brazilian Social Democracy Party (PSDB), the main opposition party. More than half (53%) have an unfavorable view of the former governor of Minas Gerais, with 20% not offering an opinion.

Eduardo Campos, the candidate of the Brazilian Socialist Party (PSB), is viewed favorably by 24% of Brazilians; close to half (47%) have a negative opinion of Campos. Nearly three-in-ten (29%) do not rate Campos, a former governor of Pernambuco. Campos’s running mate, Marina Silva, receives positive ratings from about half of Brazilians (51%), while 37% give an unfavorable rating to the former senator, who ran against Rousseff in 2010.

Finally, Joaquim Barbosa, Brazil’s Chief Justice who presided over a major political corruption trial that led to the conviction of some of Lula’s closest advisors for fraud, money-laundering and vote-buying in 2012, is viewed favorably by 60% of Brazilians. Just 26% give a negative rating to Barbosa, who recent polls by Datafolha suggest would be a strong contender if he entered the presidential race. 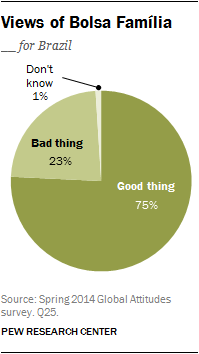 Brazilians continue to support Bolsa Família, the anti-poverty initiative launched by Lula in 2003 and recently bolstered by Rousseff, who has announced a 10% increase in payments to low-income earners under the program. Three-quarters say Bolsa Família has been a good thing for Brazil, down slightly from 81% who endorsed it in 2010.

Views of National Groups and Institutions 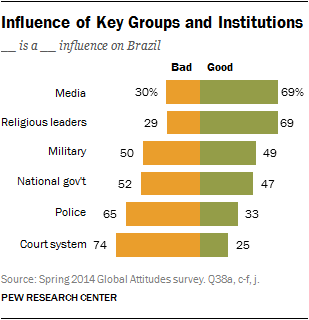 Brazilians express far more negative views of several groups and institutions than they did four years ago. For example, 47% now say the national government is having a good influence on the way things are going in the country, down from 75% in the last year of Lula’s presidency.

The military, the police and the media also receive lower marks than they did in 2010. One-third of Brazilians now say the police are having a positive impact, compared with 53% four years ago. The military, which was viewed positively by about two-thirds (66%) of Brazilians in 2010, now receives mixed ratings: 49% say its influence is good and 50% say it is bad. And the media, while still popular – 69% say it is having a positive influence – is less so than it was four years ago, when 81% gave it high marks. Only 25% say Brazil’s court system is having a positive influence on the way things are going in the country.

The influence of religious leaders continues to be viewed positively by most Brazilians. About seven-in-ten (69%) say religious leaders are having a positive impact on the country, virtually unchanged from 2010.3

Next: Chapter 3.  The World Cup and Brazil’s Place in the World
← Prev Page
Page1Page2You are reading page3Page4Page5
Next Page →

Brazilian Discontent Ahead of World Cup Chapter 1.  Views of National Conditions and the Economy in Brazil
Chapter 2.  Ratings of Key Leaders and Institutions in Brazil
Widespread Disapproval of Rousseff on Key IssuesMixed Views of Rousseff’s Overall InfluenceRousseff More Popular than Her Presidential ChallengersContinued Support for Bolsa FamíliaViews of National Groups and Institutions
Chapter 3.  The World Cup and Brazil’s Place in the World Brazil Survey Methods