Brazilians are deeply dissatisfied with the way things are going in their country. The country’s once-booming economy now receives overwhelmingly negative ratings, and concerns about rising prices, lack of employment opportunities, political corruption, crime, health care and the quality of schools are widespread.

Views about the impact of last year’s massive protests against, among other things, corruption, inflation, and lacking public services are mixed. About half of Brazilians say the demonstrations were good for the country because they brought attention to important issues, while about the same number say they were bad because they damaged Brazil’s image around the world.

Dissatisfaction with Country Direction and the Economy 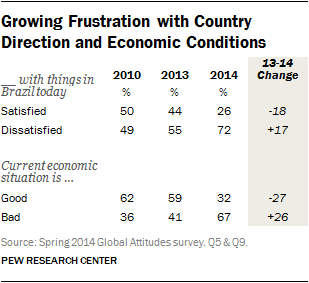 Dissatisfaction with national conditions is on the rise in Brazil, with 72% expressing a negative opinion of the way things are going in the country and just 26% saying they are satisfied. Opinions were somewhat less lopsided a year ago, when a narrow majority of Brazilians (55%) were dissatisfied and 44% were satisfied with national conditions. In 2010, prior to Dilma Rousseff’s election as president, Brazilians were evenly divided.

Similarly, ratings of the country’s economy have plummeted since 2013. Only 32% now say Brazil’s economy is in good shape, compared with 59% a year ago; two-thirds of Brazilians now say the economy is bad. Prior to this year, ratings of the national economy had been consistently positive since 2010, when Pew Research first conducted a nationally representative survey of Brazil.

Positive views of national conditions and the economy have dropped by double digits across gender, age, education and nearly all income groups since 2013. This year, in almost every group, only about a third or less say they are satisfied with the way things are going in Brazil or that the country’s economy is in good shape.

Among those who rate the current economic situation negatively, 26% expect it to remain the same and another 20% say it will be even worse in the next year, but more than half (53%) are optimistic that the economy will improve. About eight-in-ten (82%) of those who say current economic conditions are good expect them to be even better in the next 12 months. 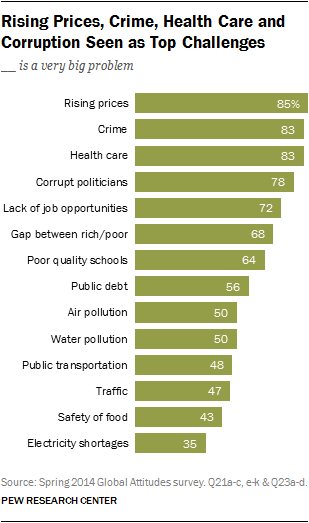 When asked which of these economic problems the government should tackle first, a 39%-plurality says addressing the lack of employment opportunities should be the priority. About a quarter of Brazilians say the gap between the rich and the poor (27%) or rising prices (25%) are the most important problems for the government to address first. Just 6% cite public debt.

Beyond the economy, Brazilians are also concerned about crime, corruption and other social issues. At least three-quarters say crime (83%), health care (83%) and corrupt political leaders (78%) are very big problems in their country, and 64% are equally concerned about poor quality schools.

About half describe air and water pollution (50% each), public transportation (48%) and traffic (47%) as very big problems, and somewhat fewer express similar concern about food safety (43%) and electricity shortages (35%). But three-quarters or more say each of these issues is at least a moderately big problem in Brazil.

Concerns about national problems are widespread across demographic groups. But not surprisingly, those in urban areas are far more likely than those in rural parts of the country to describe air pollution, traffic and public transportation as major challenges. At least half of those in urban areas describe each of these as very big problems (53%, 51% and 51%, respectively), compared with fewer than four-in-ten rural dwellers (38%, 30% and 34%). People in urban areas are also more likely to characterize poor quality schools, corruption and food safety as major problems.

Brazilians are divided on whether the massive protests that took place across the country last year had a positive or a negative effect: 47% say the protests were a good thing for Brazil because they brought attention to important issues and 48% say they were bad because they damaged the country’s image around the world.

Young people are also more likely than their elders to offer a positive view of last year’s protests, though they too remain somewhat divided. By a 52% to 43% margin, 18-29 year-olds say the demonstrations were good rather than bad for Brazil. Among 30-49 year-olds, about the same numbers say the protests were a good thing for the country (47%) as say they were a bad thing (48%). Older Brazilians are the most skeptical about the impact the protests have had on the country: 53% of those 50 and older say the demonstrations were bad because they damaged the country’s image around the world, while 39% say they had a positive effect by bringing attention to important issues.

Next: Chapter 2.  Ratings of Key Leaders and Institutions in Brazil
← Prev Page
Page1You are reading page2Page3Page4Page5
Next Page →

Brazilian Discontent Ahead of World Cup
Chapter 1.  Views of National Conditions and the Economy in Brazil
Dissatisfaction with Country Direction and the EconomyInflation Seen as Top Economic ProblemCrime, Health Care and Corruption Top Non-Economic ConcernsMixed Views of Protests
Chapter 2.  Ratings of Key Leaders and Institutions in Brazil Chapter 3.  The World Cup and Brazil’s Place in the World Brazil Survey Methods