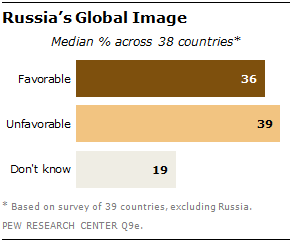 As the current chair of the G20 and host of the organization’s upcoming Leaders’ Summit, Russia has asserted itself on the world stage. Yet, in the court of public opinion, Russia gets a mixed verdict. In a global survey by the Pew Research Center, a median of just 36% among publics in 38 nations express a favorable view of Russia, compared with 39% who hold an unfavorable view, and 19% who do not offer an opinion. By contrast, the same survey found the international image of the U.S. to be much more positive, with a median of 63% expressing a favorable view of America.

In only two countries surveyed do more than half give Russia positive marks: Greece (63% favorable) and South Korea (53%). Elsewhere, opinion of the continent-spanning nation is less favorable, with negative views especially pronounced in the Middle East, Western Europe and Far East neighbor, Japan.

These are among the key findings of a survey by the Pew Research Center conducted from March 2 to May 1, 2013 among 37,653 respondents in 39 countries, including Russia.1 The survey also finds that favorable opinion of Russia has slipped since 2007 in a number of Western countries, including the U.S. and Britain. But the biggest dip in opinion of Russia has occurred in Egypt and Jordan – key countries in the Middle East, a region in which Moscow has played an increasingly prominent role.

Around the world, negative opinions of Russia are more common than positive ones, although views are mixed in many countries.

Unfavorable views of Russia are particularly widespread in the Middle East. Clear majorities in Israel (77%), Jordan (70%), Turkey (66%), Egypt (64%) and the Palestinian territories (57%) hold a negative opinion of Russia. In Lebanon, 53% also view Russia unfavorably, although opinion varies by sect: 86% of Lebanese Sunni Muslims hold a negative opinion of Russia, compared with just 9% of Lebanese Shia Muslims. Among Lebanese Christians, 54% see Russia in an unfavorable light.

Russia’s image also suffers in many European countries. Half or more in France (64%), Italy (56%), Poland (54%), the Czech Republic (51%), and Spain (51%) have an unfavorable view of the former-Eastern Bloc leader. In Germany, too, a solid majority (60%) are negative toward Russia, although unfavorable opinion is more intense in the country’s west (63%) than east (50%).

Greece is the one country in Europe where warmer views of Russia prevail (63% favorable vs. 33% unfavorable).

In Asia, opinion of Russia varies. More than half in Japan (64%) and the Philippines (52%) have an unfavorable opinion of the Russian Federation, while views lean in the opposite direction in South Korea (53% favorable). Elsewhere in the region, views are more closely divided, although pluralities of more than four-in-ten have a positive image of the Eurasian giant in China (49%), Malaysia (47%) and Indonesia (43%).

Opinion of Russia is also split in the U.S. (37% favorable vs. 43% unfavorable) and Canada (42% vs. 39%). To the south, most Brazilians view Russia negatively (52% unfavorable), while among other Latin American countries opinion of the former Cold War power is muted, with positive and negative views nearly evenly divided, and substantial numbers not offering an opinion.

In sub-Saharan Africa, only South Africans have a clearly negative image of Russia (53% unfavorable). Elsewhere in the region, views of Russia are either divided or lean in a favorable direction, although many do not have an opinion.

Compared with six years ago, Russia’s image has worsened among key Western countries, including Canada (a 10 percentage point decline in favorable views), Britain (-9), and the U.S. (-7). Over the same period, favorable opinion of Russia has also declined in Mexico (-10 points), Kenya (-10), Israel (-8), and Chile (-8).

But the most dramatic drop in Russia’s standing has occurred in Jordan (-23) and Egypt (-16), perhaps reflecting dissatisfaction with Russia’s involvement in Middle Eastern affairs.

Between 2007 and 2013, Russia’s image has significantly improved in only two countries: Indonesia (+7 percentage points) and Argentina (+7). 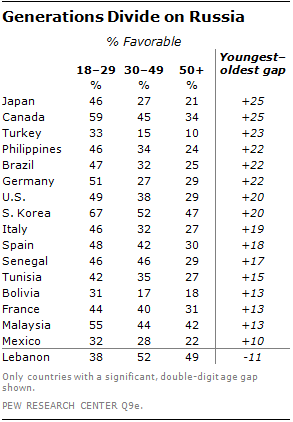 Views of Russia vary significantly by age in many of the countries surveyed, with young people ages 18-29 often more likely to express positive views of Russia than people 50 and older.

The difference in views of Russia between the youngest and oldest age cohorts is 20 percentage points or more in eight countries surveyed, including G20 members Japan, Canada, Brazil, Germany, the U.S. and South Korea.

Generational differences in views of Russia may reflect shifting perceptions of Russia’s place in the world. However, it may be part of a more universal phenomenon: the image of both the U.S. and China is often more favorable among those under 30, as opposed to people 50 and older.