In all Global Attitudes surveys dating back to 2002, the rest of the world has held the American people in higher esteem than it has held America. That is still the case now, but in several countries around the world, the gap has narrowed.

This shift in perceptions is most apparent in Indonesia, where since 2003 there has been a sharp increase in U.S. favorability ratings (to 38%, up from 15%) but a significant drop in the favorability ratings of Americans (to 46%, down from 56%). Whatever goodwill the U.S. gained in Indonesia from its tsunami relief efforts apparently did not improve the image that Indonesians have of the American people.

A similar pattern has played out in Russia, Turkey and Pakistan. In these three nations, the image of the United States has risen since 2003 while the image of Americans has declined.

The favorability ratings of Americans have declined since 2002 in 9 of the 12 countries for which trend data exists for that year. These include Great Britain, Poland, Canada, Germany, France, Russia, Indonesia, Jordan and Turkey. The three countries where the image of Americans has risen in that period are Pakistan, India and Lebanon.

To find out what the world makes of the American character, respondents, including Americans themselves, were asked to rate Americans on seven character traits – three positives (hardworking, inventive and honest) and four negative (greedy, violent, rude and immoral).

Hardworking is the positive trait that people around the world most readily associate with Americans. A majority of every public save one agrees with that assessment, led by the French, who agree with it by a margin of nearly nine-to-one (89%). Just 44% of the Chinese see Americans as hardworking, however. A majority of every public also believes Americans are inventive, though by somewhat less lopsided margins. World views are more mixed about whether Americans are honest; only in the U.S., India, Britain, France and Germany is more than half of the public ready to use that word to describe Americans.

On the negative side of the ledger, people around the world are generally inclined to say Americans are greedy and violent. However, most people are not inclined to describe Americans as rude and immoral.

In all these character assessments, Americans generally fared worse in Muslim countries than they did among traditional allies. 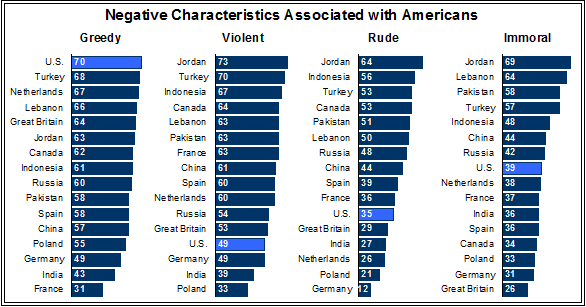 In weighing the relative importance of the rest of the world’s assessments about each of these specific character traits, rudeness emerges in countries that are traditional U.S. allies as the trait most linked with a low regard for Americans. In Muslim countries as well, rudeness is an important link to low overall ratings for Americans, but so too is the perception that Americans are violent and immoral.

Global Unease With Major World Powers
American Public Diplomacy in the Islamic World
America’s Image in the World: Findings from the Pew Global Attitudes Project
Anti-Americanism: Causes and Characteristics
What the World Thinks in 2002