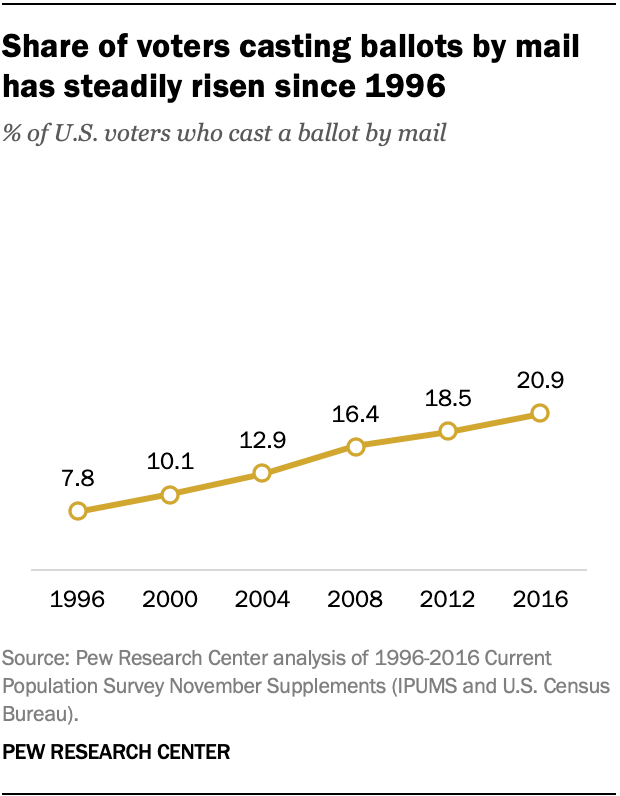 Some states are expanding access to voting by mail amid ongoing fears over the coronavirus outbreak. But while the share of Americans casting votes by mail has risen in recent presidential election cycles, it remains relatively low overall, and there’s wide variation across the country when it comes to the percentage of voters who have used this method.

Overall, the share of voters who cast ballots via mail-in methods increased nearly threefold between 1996 and 2016 – from 7.8% to nearly 21%, according to a Pew Research Center analysis of the Census Bureau’s voter supplement data.

But even as seven-in-ten adults favor allowing any voter to vote by mail if they would like to, there is significant variation from one state to another. States like Oregon and Washington conduct their elections almost entirely by mail (97% of voters in these states mailed in their ballots in 2016), but other states have seen relatively few mail ballots. In West Virginia, Kentucky and Tennessee, for example, just 2% of voters mailed in their ballots in the 2016 presidential election.

As part of our elections research, Pew Research Center conducted this analysis to explore how voting by mail has changed over time across 50 states and the District of Columbia. The data in this post is based on an analysis of Current Population Survey November Supplements (IPUMS and U.S Census Bureau) from 1996 through 2016. Estimates of mail-in ballots are based on self-reports from surveys conducted following presidential elections. For the analysis of state laws, researchers consulted Ballotpedia and the National Conference of State Legislators; both were accessed on June 17, 2020. Information about state law exceptions as a result of the COVID-19 outbreak are current as of May 1, 2020.

Across the five states where the 2020 presidential election will be conducted entirely by mail, nearly nine-in-ten voters cast ballots using this method in 2016 – a rate that increased 60 percentage points since 1996, as states adopted these measures. 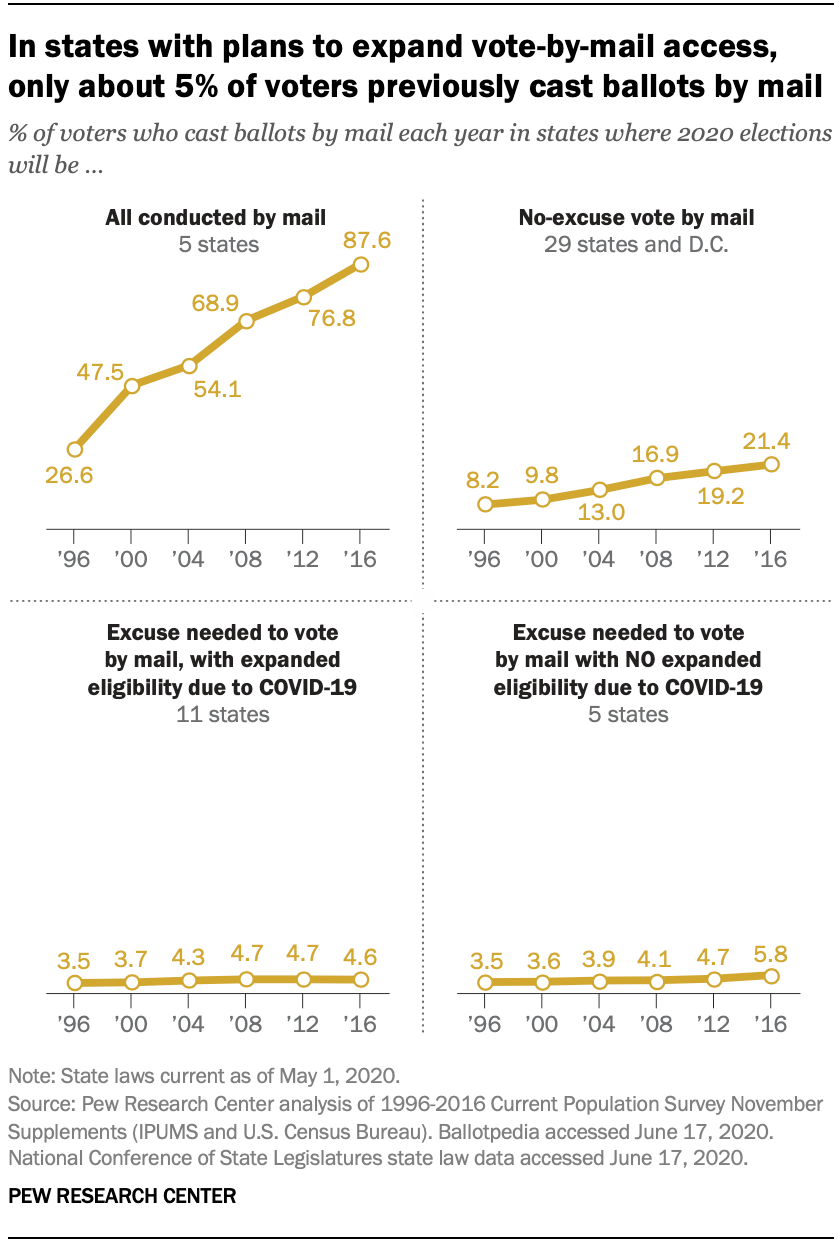 In 29 states, as well as the District of Columbia, voters have the option to cast a ballot by mail without needing to document an excuse. In these states, roughly one-in-five voters cast a mail-in ballot in 2016 – a steady increase since 1996, when 8.2% of voters in these states did so.

In 16 other states, an excuse is required to vote absentee – but 11 of these states have already announced changes to eligibility requirements amid coronavirus fears.

Across these states, very few voters have cast ballots by mail in prior elections. Overall, in the 11 states requiring an excuse but expanding eligibility due to COVID-19, just 4.6% of voters cast their ballot by mail in 2016. (Among this group, the highest vote-by-mail rate was in South Carolina, at 8%, while the lowest was in Kentucky, Tennessee and West Virginia at 2%.) In states with no current laws to expand access, 2016 vote-by-mail rates were similarly low. 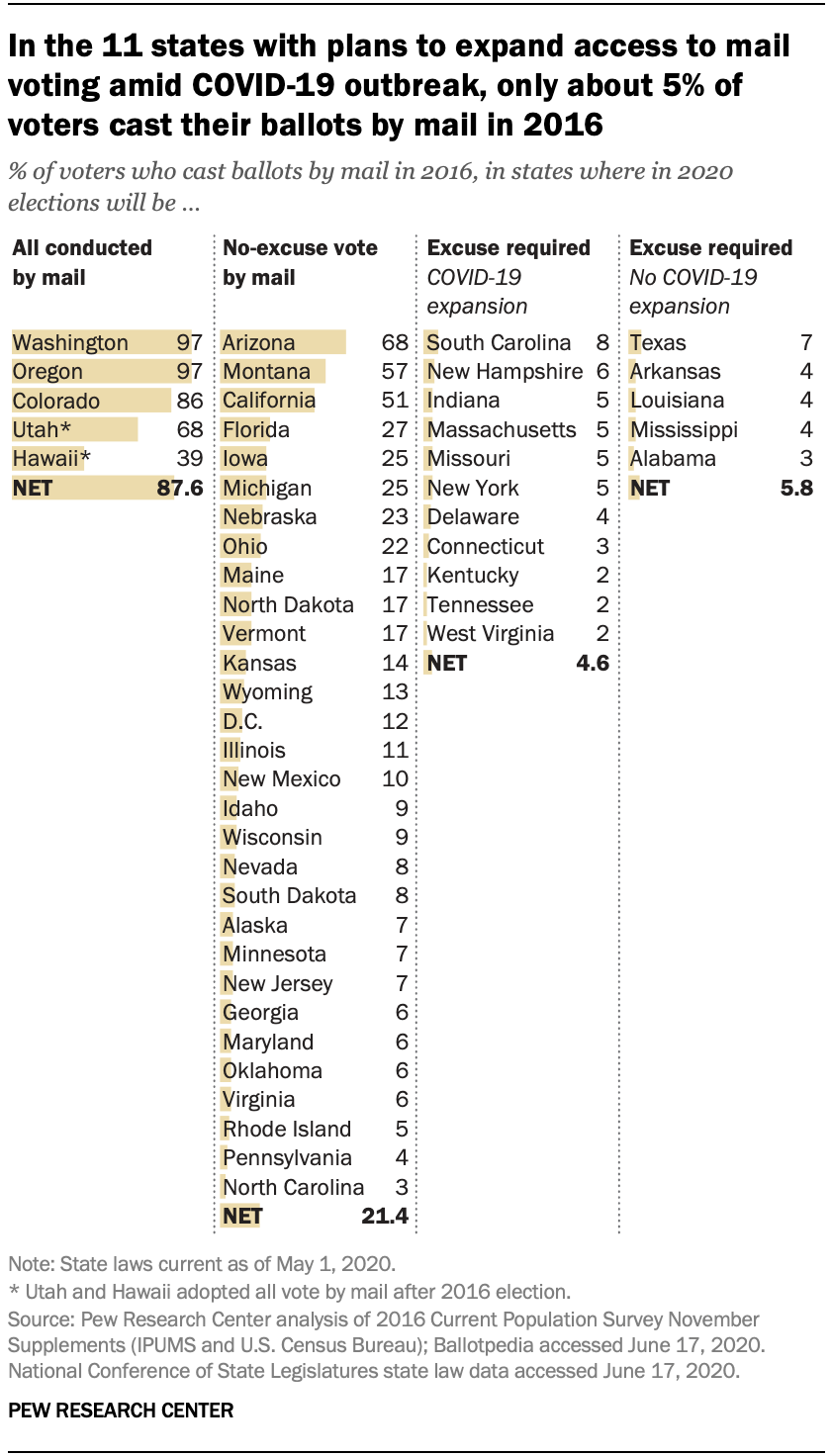