This pattern in jobs lost may change as the economic crisis deepens and spreads across broader swaths of the economy. The Congressional Budget Office projects that the number of employed workers will decrease by nearly 27 million in the coming months, nine times the loss from February to March. Also, signs have emerged that the jobs of many white-collar workers are increasingly at risk. It is possible that being able to work remotely will offer less protection as the COVID-19 downturn nears its trough.

The COVID-19 outbreak has made social distancing an imperative, leading to the closures of workplaces and moving many workers to work from home. This analysis focuses on employment in jobs that could be teleworked and those that could not be teleworked, by the demographics of workers, and how employment in those jobs changed in the month preceding the widespread shutdown in U.S. business activity.

In this analysis, the grouping of jobs by whether they could be teleworked is based on a classification recently developed by researchers at the University of Chicago, with a few modifications. Employment estimates in this analysis are derived from the Current Population Survey (CPS), the government’s official source for monthly estimates of unemployment. The occupation codes in the CPS do not align exactly with the codes used in the University of Chicago study, leading to some adjustments. For some other occupations, the Chicago researchers’ classification did not reflect actual labor market outcomes in recent weeks. For example, the researchers grouped athletes, sports competitors, coaches and scouts among jobs that could be teleworked, yet these were some of the first jobs that shut down. Our analysis places such jobs into the category of jobs that could not be teleworked. The estimates in this analysis are nonseasonally adjusted.

The COVID-19 outbreak has affected data collection efforts by the U.S. government in its surveys, especially limiting in-person data collection. This resulted in about a 10 percentage point decrease in the response rate for the CPS in March 2020, compared with preceding months. It is possible that some measures of employment and demographic composition are affected by these changes in data collection.

In February, before the economic impact of the coronavirus outbreak truly took hold, 40% of American workers, or 63 million, were employed in occupations that potentially could be performed remotely, such as computer programmers, economists and human resource managers. Jobs that could not be performed remotely accounted for 60% of U.S. employment, or 95 million workers. These include jobs such as dentists, carpenters, machinists and other occupations that typically involve interactions with people, working outdoors or handling machinery or equipment, according to a classification system recently developed by researchers at the University of Chicago and adapted for this analysis by Pew Research Center. 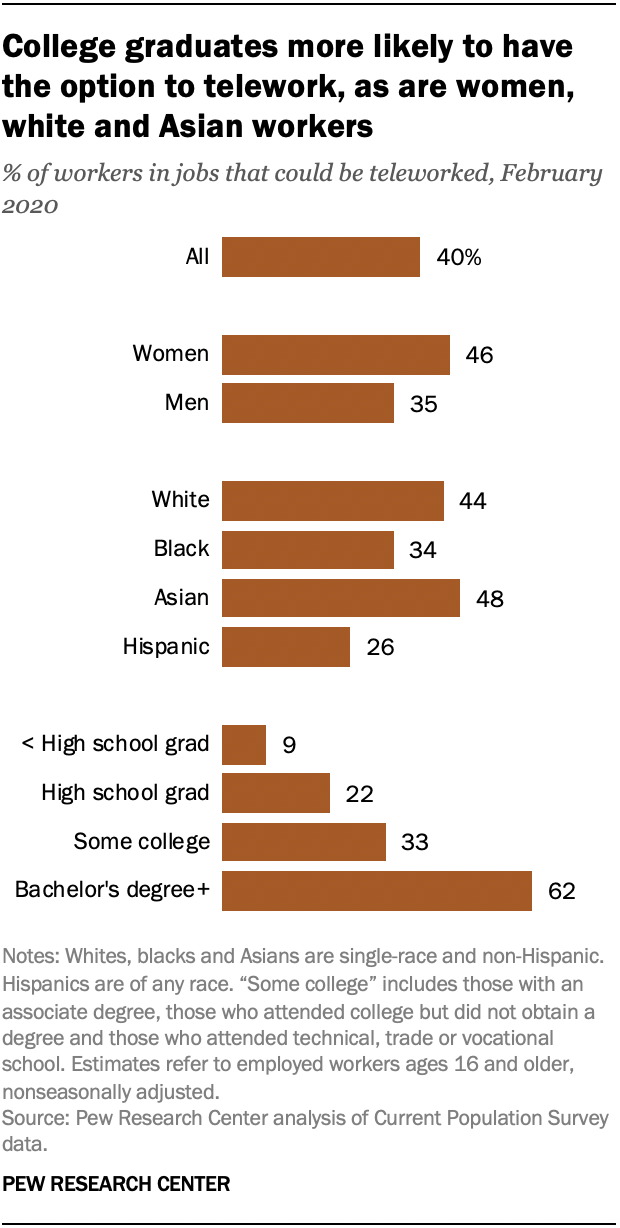 Workers’ education level is a key determinant of whether they hold jobs that may be teleworked. In February, 62% of workers with a bachelor’s degree or more education had jobs that could be performed remotely. That is nearly double the share among workers who had completed some college education (33%), including an associate degree, and almost triple the share among high school graduates who did not go to college (22%). Few workers who did not graduate from high school (9%) had the option to telework.

Women were notably more likely than men to have the opportunity to telework, 46% vs. 35%. In part, this is because employed women have higher levels of education – 42% had at least a bachelor’s degree in February, compared with 37% of employed men. But it is also because women were more concentrated in occupations that could be done remotely. For instance, 23% of employed women held jobs in education and administrative support, compared with only 7% of employed men.

Among racial and ethnic groups, 48% of Asian workers and 44% of white workers could potentially telework, compared with 34% of black workers and 26% of Hispanic workers. Differences in education levels are again a factor. In February, about two-thirds (66%) of Asian workers had a bachelor’s degree or higher, compared with 44% of white, 33% of black and 21% of Hispanic workers.

While the ability to work remotely is no guarantee of continued employment, it has become a realistic option for many workers in the internet age. Some 73% of American adults reported having broadband access at home in 2019, and 25% of workers did work at home at least occasionally in 2017-18. The share who work from home may increase for good as workplaces adapt to the post-COVID-19 environment.

There is evidence that teleworking is currently more prevalent than before the COVID-19 outbreak. In a Pew Research Center survey conducted in late March 2020, 40% of adults ages 18 to 64 reported they had worked from home as a result of the coronavirus outbreak. This is the same as the share of American workers who, in this analysis, are estimated to hold jobs that could be teleworked. The potential for the labor market to dampen job losses by turning to telework may already be stretched to capacity. And for some – especially black, Hispanic and lower-income workers – the ability to telework may be affected by access to broadband at home.

As noted, job losses in the early stages of the COVID-19 outbreak have been concentrated among workers unable to telework. From February to March, U.S. employment decreased by 2.9 million, a loss of 1.8%. This was driven almost entirely by employment falling by 2.6 million (‑2.7%) in jobs that could not be teleworked. Employment in occupations that could be teleworked was essentially unchanged, edging down by 300,000 (‑0.5%).

But employment outcomes varied notably by race and ethnicity. Black workers who could telework saw their employment decrease more sharply (‑4.3%) than black workers who could not telework (‑1.4%). The reasons for this are not clear. One contributing factor may be that the sizable losses for black workers in sales and related occupations, health care and technical jobs were partially offset by gains in architecture and engineering, as well as construction and extraction.

Like most other groups, workers at all levels of education appear to have experienced greater losses in employment if they could not telework. But the differences are not always statistically significant. The employment of workers with a college degree was essentially unchanged whether they could work remotely or not. Workers with a high school diploma experienced sizable losses in employment, whether they could telework or not. Foreign-born workers – with Hispanic workers alone accounting for 46% of the immigrant workforce – saw sharper losses than U.S.-born workers, especially in jobs that could not be teleworked.

Related: Before the coronavirus, telework was an optional benefit, mostly for the affluent few