Pew Research Center conducted these surveys to understand how Americans think about privacy, data collection, surveillance and smartphone tracking, including in the context of the new coronavirus outbreak.

One study referenced in this piece surveyed 4,917 U.S. adults from April 7 to 12, 2020. Here are the questions used in that survey, along with the responses, and its methodology. For another report, we surveyed 4,272 U.S. adults from June 3 to 17, 2019. Here are the questions used for the report, along with the responses, and its methodology. Everyone who took part in both surveys is a member of Pew Research Center’s American Trends Panel (ATP), an online survey panel that is recruited through national, random sampling of residential addresses. Recruiting our panelists by phone or mail ensures that nearly all U.S. adults have a chance of selection. This gives us confidence that any sample can represent the whole population (see our Methods 101 explainer on random sampling). 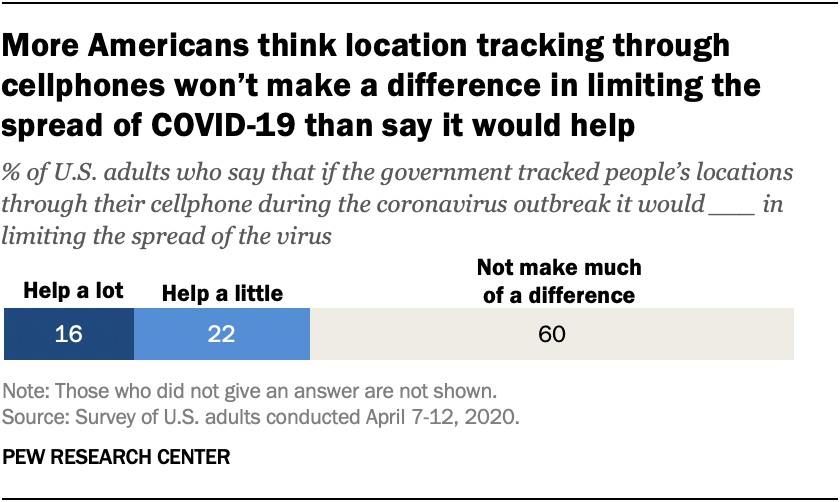 1Six-in-ten Americans say that if the government tracked people’s locations through their cellphone, it wouldn’t make much of a difference in limiting the spread of COVID-19, according a survey of U.S. adults conducted April 7 to 12. Smaller shares of Americans say it would help a lot (16%) or help a little (22%). 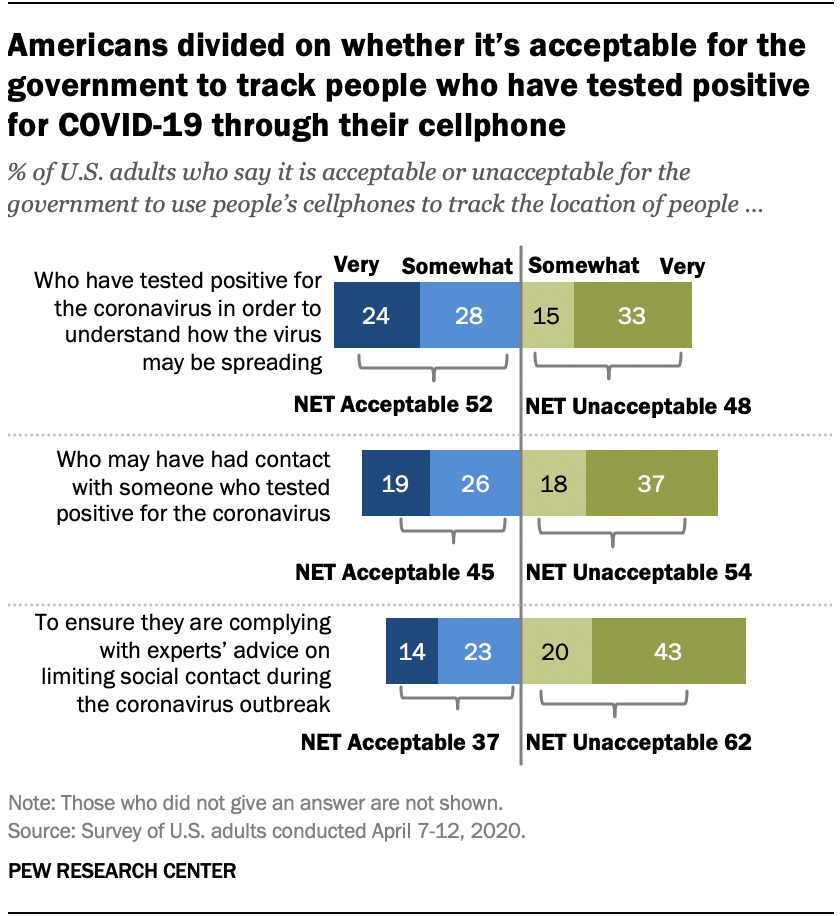 2Americans are split on the acceptability of using cellphone data to trace people’s movements. About half of Americans (52%) say it would be at least somewhat acceptable for the government to use people’s cellphones to track the location of people who have tested positive for COVID-19 in order to understand how the virus may be spreading, according to the April survey. Still, 48% of U.S. adults find this practice to be at least somewhat unacceptable. There is far less support when Americans are asked about the government using cellphones to track people’s locations to ensure they are complying with social distancing recommendations: 62% say this is somewhat or very unacceptable, while just 37% say it is somewhat or very acceptable. 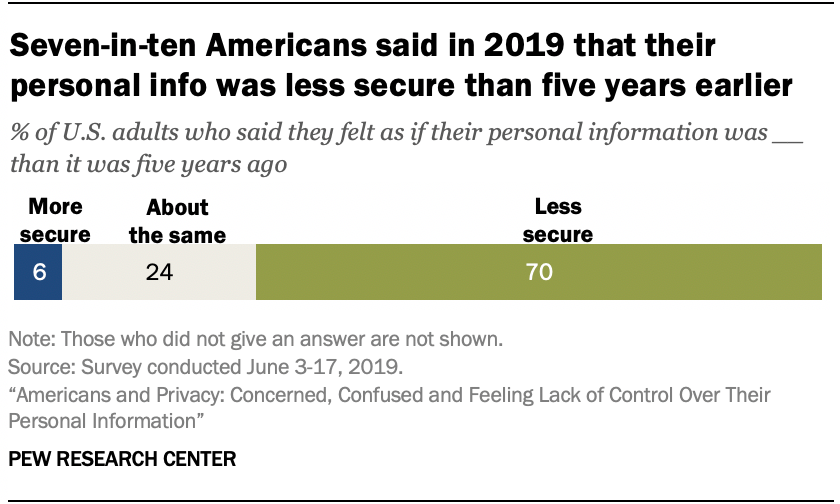 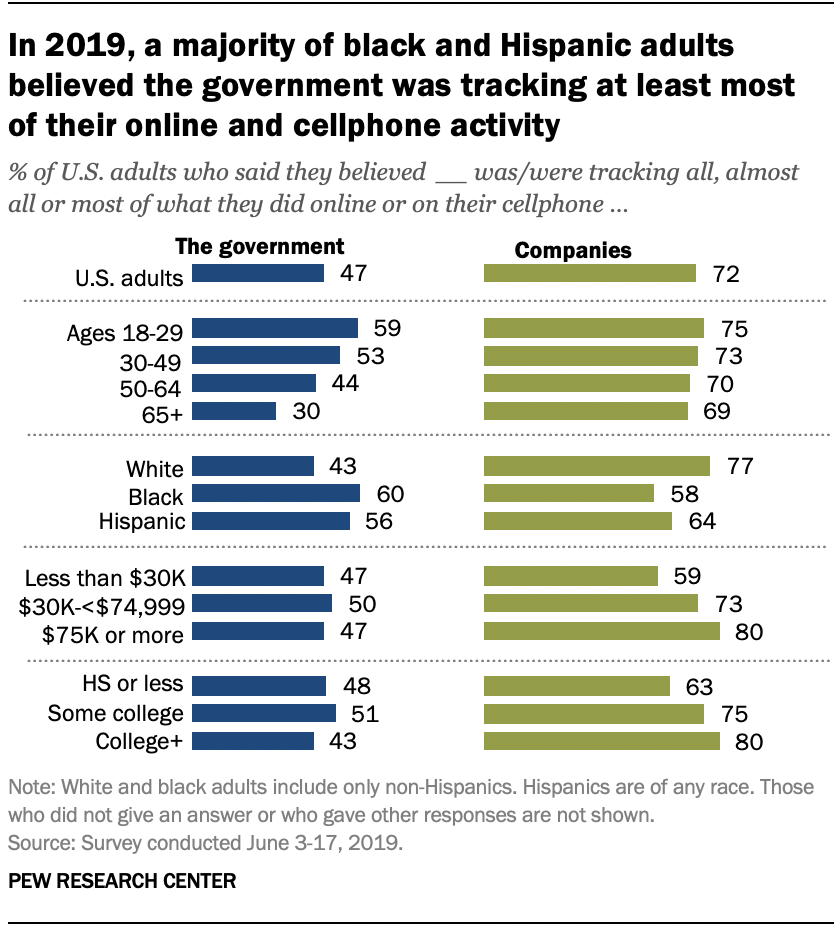 5About seven-in-ten Americans (72%) believe that all, almost all or most of what they do online or while using a cellphone is being tracked by advertisers, technology firms or other companies, according to the June 2019 survey. Close to half of Americans (47%) said the same about their online activities being tracked by the government.

Over the past few weeks, public health professionals have discussed location tracking for the purposes of contact tracing and limiting the spread of COVID-19.

In the same 2019 survey, black and Hispanic Americans were more likely than white adults to say they believe the government is tracking all, almost all or most of their online activities. 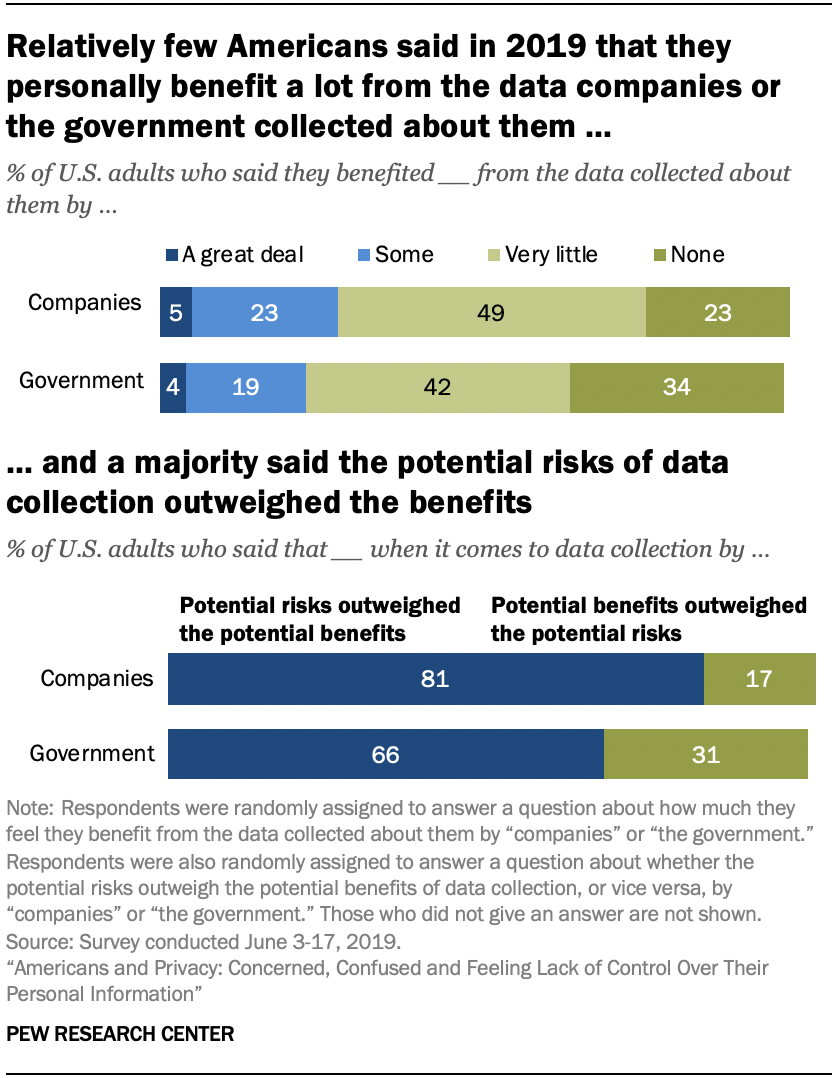 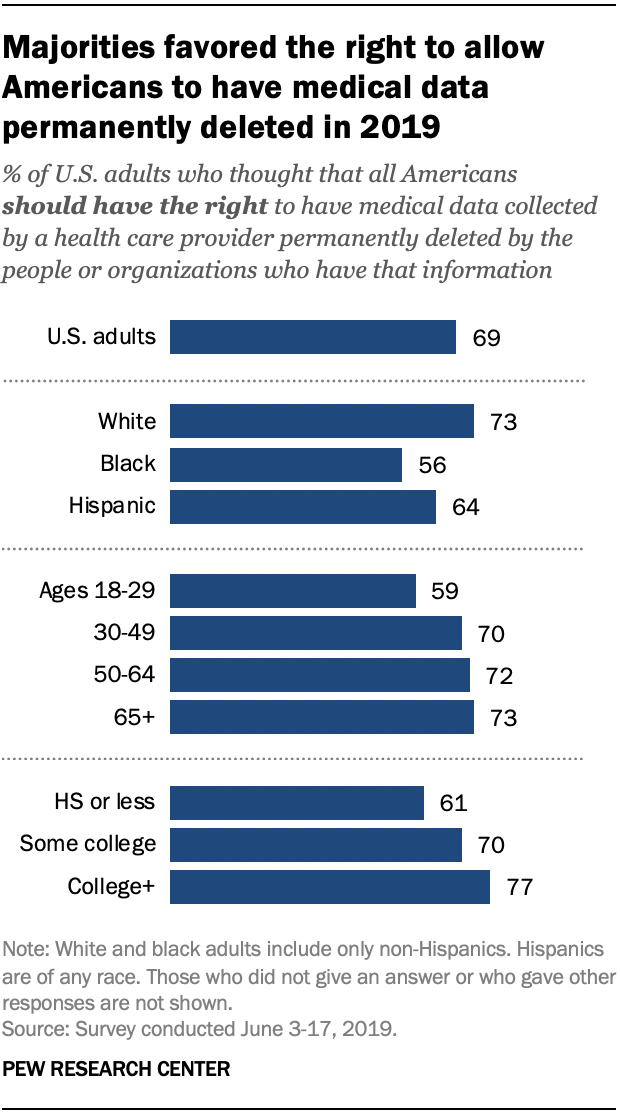 7Americans widely support the “right to be forgotten,” allowing people to remove personal information about themselves from public online searches or databases. When the Center asked Americans in June 2019 about medical data specifically, about seven-in-ten U.S. adults (69%) said all Americans should have the right to have medical data collected by a health provider permanently deleted by the people or organizations who have that information.

8Most Americans say they do not understand current privacy laws and regulations, but most favor more government regulation in this area. Six-in-ten Americans (63%) said in 2019 that they knew very little or nothing at all about the laws and regulations currently in place to protect their data privacy; just 3% said they understood a great deal. However, three-quarters of Americans said they thought there should be more government regulation of what companies can do with their customers’ personal information; just 8% favored less regulation.

10The public often struggles with understanding key concepts related to digital privacy and data protection. In a series of questions asked in June 2019 to test Americans’ knowledge of digital topics, only a minority of adults correctly said that starting a URL with “https://” means the information entered on that site is encrypted (30%). A similarly small share (28%) could accurately identify an example of two-factor authentication. The COVID-19 outbreak has brought about increases in malicious online attacks and email scams, according to a warning from the U.S. Secret Service. Experts warn that many of these criminal efforts could especially impact individuals in high-risk populations and those with lower levels of digital and financial literacy and cybersecurity knowledge.