The economic fallout from the COVID-19 outbreak has put the jobs of many American workers in jeopardy, but it has also put in doubt the economic fortunes of many of the business owners who employ them.

More than four-in-ten U.S. businesses with paid employees – 2.4 million out of the 5.3 million examined – operate in higher-risk industries likely to be affected more deeply by the COVID-19 outbreak, according to a Pew Research Center analysis of federal government data. Upwards of 1 million of these businesses are in retail trade or accommodation and food services alone, among the industries jolted by mandated closures or the need for social distancing.

The typical American business is small. The ones covered in this analysis employed 11 workers on average in 2016, the latest year for which data is available. The workers earned an average of $40,194. Nearly three-fourths of businesses (74%) had annual sales of less than $1 million, and about a third (34%) had been in business for five years or less. Businesses in higher-risk industries differ from businesses overall in one key respect – their payroll averaged only $28,259 in 2016. Thus, as businesses in higher-risk industries confront uncertain economic times, their fortunes mostly imperil low-wage workers.

The COVID-19 pandemic is likely to have a widespread negative impact on business activity in the United States. This analysis focuses on the major demographic characteristics of business owners in the economy overall and in industries that are at higher risk of a more severe economic shock.

For this analysis, we focused on 5.3 million businesses with paid employees and which could be classified by the demographic characteristics of their owners. Collectively, these businesses employed 58.7 million workers in 2016, the latest year for which data is available. Some 270,000 businesses, employing 62.3 million workers, are excluded because they are publicly held or otherwise could not be classified by the characteristics of their owners. Overall, there are about 30 million businesses in the U.S., including the self-employed.

Estimates relating to business owners are derived from the 2016 Annual Survey of Entrepreneurs, the latest available data. Additional estimates of the workforce are from the U.S. Bureau of Labor Statistics or tabulated from the Current Population Survey (CPS). The terms “business” and “firm” are used interchangeably, as are the terms “business owner” and “entrepreneur,” and “immigrant” and “foreign born.” The term “sales” refers to either sales or receipts. 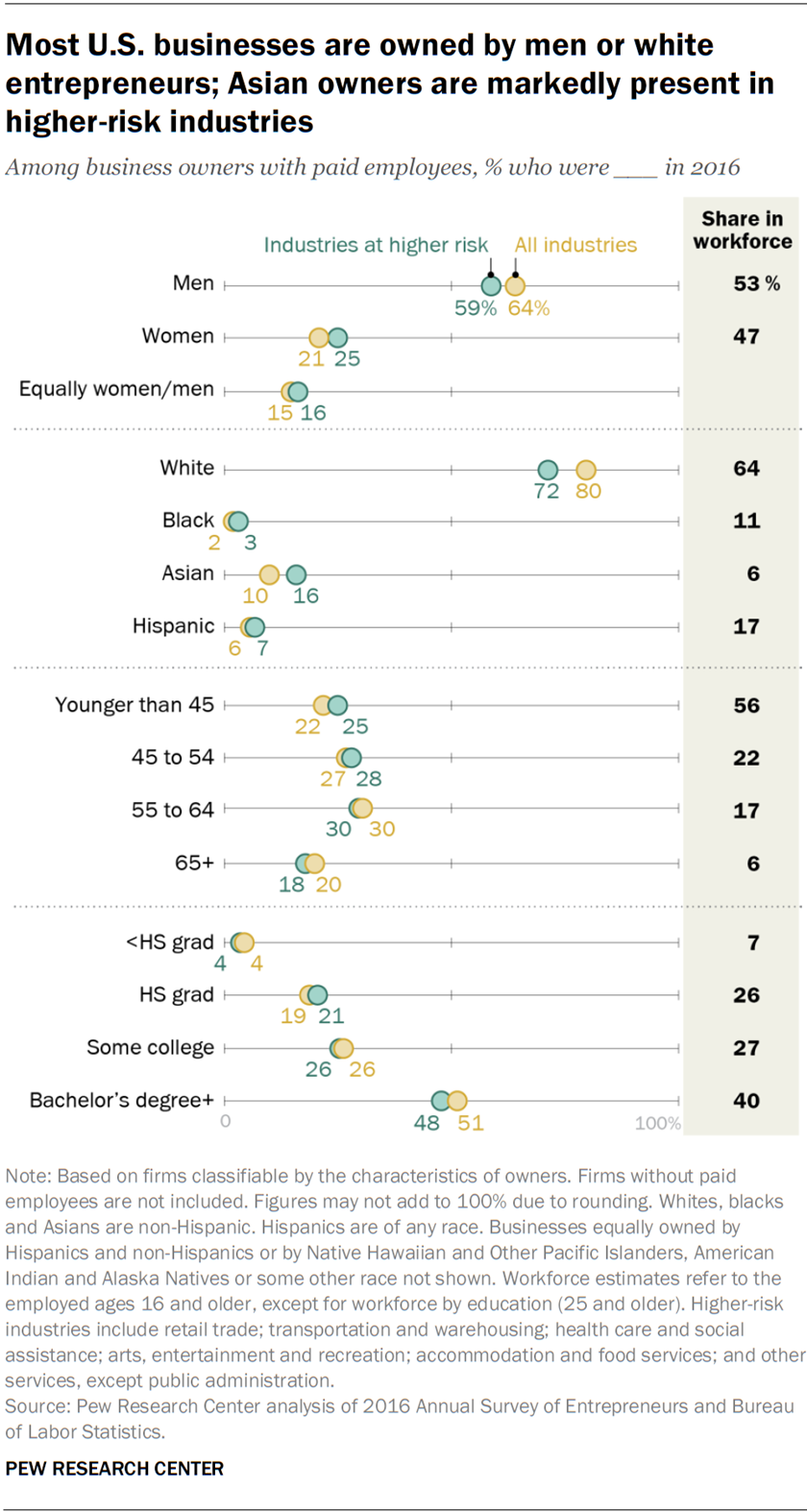 The economic risk to business owners varies by the demographic group to which they belong. Men, white or Asian entrepreneurs, people ages 55 and older and college graduates are more likely to be business owners compared with their shares in the workforce overall. At the same time, women, Asian and foreign-born entrepreneurs have a greater presence in higher-risk industries than in the economy overall.

However, women have somewhat more exposure in higher-risk industries, where they were the principal owners of 25% of businesses and equal partners in another 16%. This is because of their greater role as owners in the health care and social assistance industry and in other services (excluding public administration). In these two industries, women owned 33% and 27% of businesses, respectively. 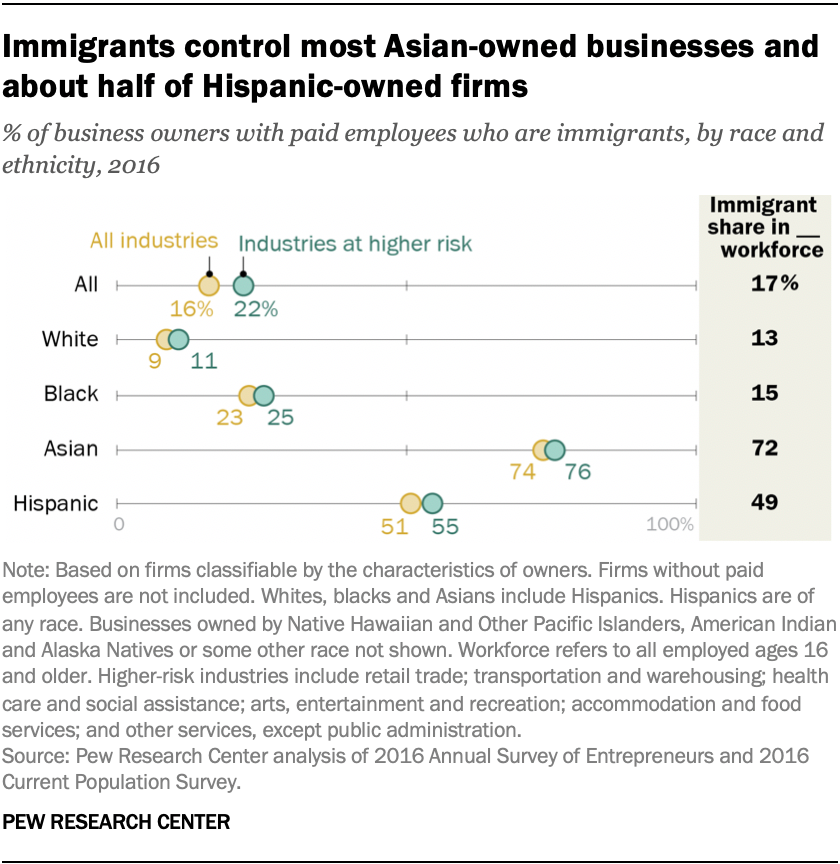 Meanwhile, entrepreneurship among black immigrants exceeds their role in the U.S. workforce. Immigrant owners accounted for about one-fourth of black-owned businesses in the economy overall (23%) and in higher-risk industries (25%). These shares are much higher than the share of immigrants in the black workforce overall (15%). 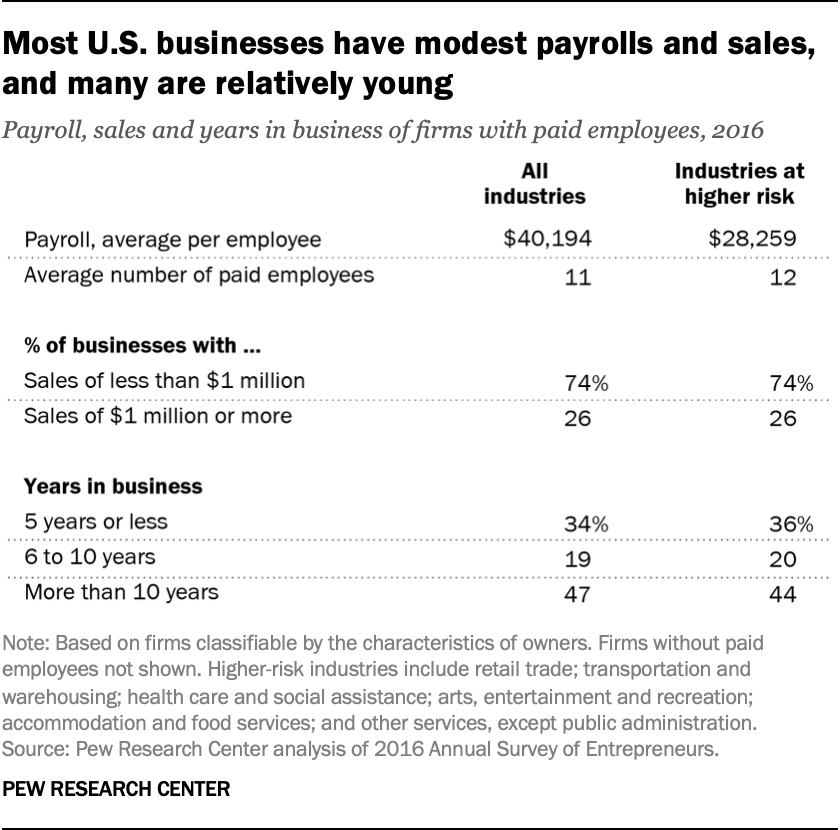 It is not known exactly which businesses will survive the economic fallout from the COVID-19 outbreak or the extent to which government lending programs will keep them afloat. Most businesses with paid employees have small payrolls and modest revenues. Many are relatively young. A report from the Federal Reserve Bank of New York finds that the financial health of smaller firms, younger firms and firms with black or Hispanic owners is weaker than that of other firms. Even in normal times, only about half of business establishments are estimated to survive five years or more. A recent survey of small businesses found that 43% are temporarily closed due to the effects of the COVID-19 outbreak. What might matter most is the duration of the economic slide and whether it resembles the aftershock of a natural disaster or a deep cyclical downturn.