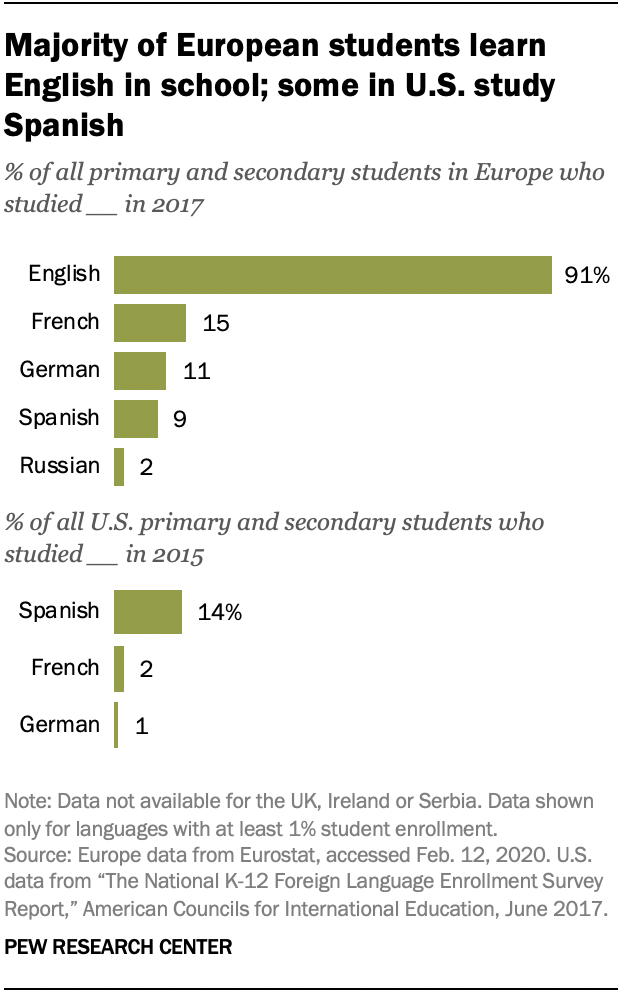 Students in Europe learn foreign languages in school at a much higher rate than their American counterparts. They also tend to learn more languages throughout their education due to national mandates. Part of this linguistic imbalance may be because most European students are learning English in school, according to a new Pew Research Center analysis.

Across Europe, 91% of students in primary and secondary school were studying English in 2017 – more than all other foreign languages learned combined by a large margin, according to data from Eurostat, the statistics arm of the European Commission. The next-most studied languages in European schools are French, German and Spanish, each garnering no more than 15% of students participating in 2017. Russian, studied in a formal classroom by 2% of Europeans, is the only other foreign language that more than 1% of European students learn.

To assess how many students learn English at school in European countries, Pew Research Center analyzed language learning data for 30 nations available via Eurostat, the statistics arm of the European Commission. The data in its raw form is separated within country by three education levels – primary, lower secondary and upper secondary. The analysis combines these levels to allow for analysis across the aggregate. While this post focuses primarily on students learning English in school, the same aggregation methods were used for each language studied in each country where data is available in 2017. The United Kingdom, Ireland and Serbia have incomplete or no data available and were therefore omitted from this analysis.

Data for the United States comes from “The National K-12 Foreign Language Enrollment Survey Report” from the American Councils for International Education, published in June 2017.

Many European countries mandate that students study more than one foreign language, so students learning something other than English may also study English simultaneously or at some point in their education.

While English is the most studied foreign language in Europe overall, this varies somewhat across countries. For example, 100% of students in primary and secondary school in Malta, Liechtenstein, Northern Macedonia and Austria studied English in the classroom as of 2017. In 25 out of 29 nations where data is available, about three-quarters or more of all students studied English. It is important to remember that this data represents a snapshot of language learning in one year – 2017 – rather than a student’s language exposure over the full course of their academic career. For instance, while the Netherlands ranks toward the bottom in terms of all students learning English in 2017, this is driven in part by lower proportions of Dutch primary students enrolled in language classes. While only about four-in-ten primary students are enrolled in a language course, nearly all of those students in a language class are already learning English in the classroom. Foreign language classes are not mandated in the Netherlands for students until age 10, one of the later ages in the EU.

Linguistic diversity within a country sometimes affects which languages students learn in school. This is apparent in Belgium, a country where distinct regions are French-speaking while other areas predominantly speak Flemish or German. In the Flemish-speaking community, nearly all students learn French, which is considered a foreign language in that region, while most students in the French-speaking communities learn Dutch. A similar environment can be found in Luxembourg; Belgium and Luxembourg are the only countries where a majority of students are not learning English in school. 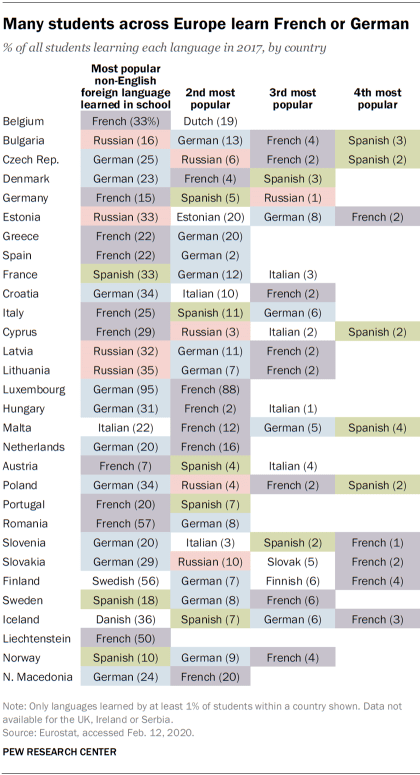 While English predominates across these 29 countries, there are some notable regional and country-level differences in who learns which languages in school. Russian is, for example, most often learned in countries that border the Russian Federation or are former members of the Soviet bloc, such as Latvia, Lithuania, Estonia and Bulgaria. French and German appear most often as non-English foreign languages studied in school, in 29 and 23 countries, respectively.

When it comes to three non-European languages measured by Eurostat, rates of learning in school drop precipitously. In no country do more than 2% of students study languages such as Chinese, Japanese or Arabic in the classroom in a given year, dating back to at least 2012. This holds true when looking at overall proportions as well as only among secondary students, where language learning rates tend to be higher.

Predominantly English-speaking countries – including the U.S. – have lower rates of foreign language learning, though the data is not comparable to the rest of Europe in some cases. In the U.S., only about 20% of K-12 students studied a foreign language in school, according to a 2017 report from the American Councils for International Education. This includes 14% who studied Spanish, 2% who learned French and 1% who were taking German courses.

Most students in Ireland learn English and Gaelic, but neither is considered a foreign language. Likewise, the National University of Ireland found 30% of Irish graduates complete their secondary education without a foreign language in their final qualification. And while the UK does mandate that students study at least one foreign language in school, they have the latest minimum starting age of all countries in Europe (11 years old). Studies from the BBC and the British Academy have shown steady decreases in the number of British secondary students taking exams in foreign languages, with noteworthy drop-offs in French and German language students since 2017.