The main source for this post is the 2019 National Compensation Survey, an annual survey of pay and benefits conducted by the federal Bureau of Labor Statistics. A total of 9,881 business establishments (such as individual offices, stores or factories) and 1,596 state and local government entities (such as school districts or police departments) were surveyed. Of these, 6,470 business establishments and 1,441 governmental entities responded.

Along with (or instead of) regular paid sick leave, some employers are using other means of helping themselves and their workers get through the current COVID-19 crisis, such as offering ad hoc, temporary sick leave or, when feasible, allowing or requiring people to work remotely.

In the private sector, 73% of workers have access to paid sick leave, but the share varies a lot by what they do and where they work. 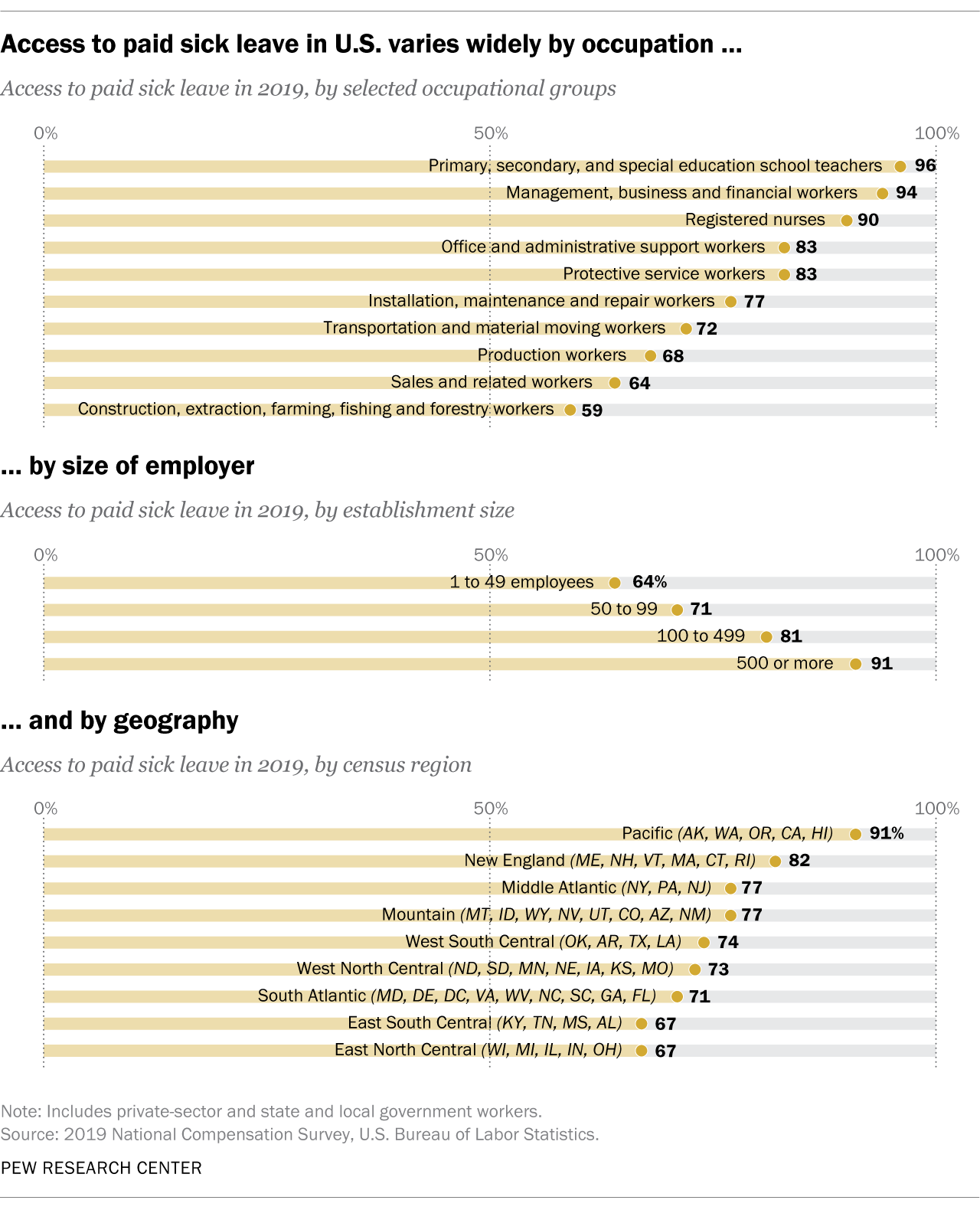 Nine-in-ten private-sector workers in “management, professional and related” occupations – such as corporate executives, software engineers, bankers and lawyers – have paid sick leave available to them. Coverage levels go down from there: to 82% of office and administrative support workers, 68% of production workers, 64% of salespeople and 56% of construction, extraction and natural resource workers. Among service workers the overall rate for access to paid sick leave is 58%, but that appears to vary widely within the sector. A 2010 report by the Joint Economic Committee of Congress, for example, found that just 27% of food preparation and food service workers, and the same share of child care workers, had access to paid sick leave.

The picture also varies when looking at private sector workers’ access to paid sick leave by industry group. Nearly all utility industry workers (95%) have access to the benefit, as do 79% of manufacturing workers, but only 64% of retail workers and 58% of construction industry workers.

Only 43% of part-time civilian workers have sick leave benefits available, versus 86% of full-time workers. Most unionized workers (91%) have access to paid sick leave, compared with 73% of non-union workers.

Paid sick leave has become somewhat more common in recent years. About two-thirds of U.S. workers were offered the benefit in 2014, according to NCS data, but that rose to 76% in last year’s survey, the most recent one for which data has been publicly reported.

The U.S. and South Korea are the only two countries in the Organization for Economic Cooperation and Development where paid sick leave is not guaranteed, according to a 2018 report from UCLA’s World Policy Analysis Center. All European Union member countries have some form of paid sick leave, though the details vary. 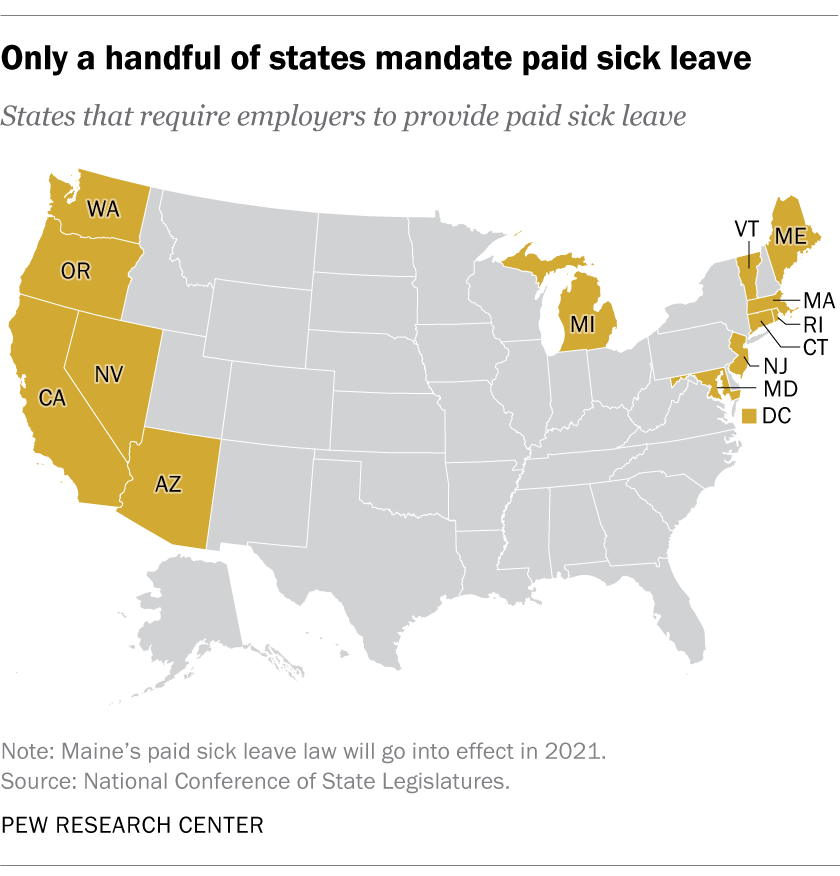 In the U.S., 12 states and the District of Columbia currently require employers to provide paid sick leave to their workers, according to the National Conference of State Legislatures (Maine will join that list next year).

House Democrats have proposed a temporary federal sick leave benefit as part of emergency legislation to address the COVID-19 crisis. The measure would guarantee workers with the disease or caring for family members with it two-thirds of their wages for up to three month; it would expire in January 2021. The bill also would require all private employers to give their workers seven days of paid sick leave, with an additional 14 days available immediately in the event of “public health emergencies.”

For those workers who do have access to paid sick leave, the form it takes can vary considerably from workplace to workplace, according to the NCS data. About two-thirds (68%) of covered civilian workers get a fixed number of paid sick days per year. After one year of service, 22% of those workers have fewer than five days, 46% have five to nine days, and 28% have 10 to 14 days.

Of the workers with a fixed allotment of sick days, about a fifth (21%) can “bank” an unlimited number of unused sick days for future use; 37% are limited in how many unused sick days they can carry over from one year to the next; and 42% are subject to “use it or lose it” rules. Private businesses in general have much tighter caps on sick-leave accumulation than the public sector: The median cap for private sector workers is 20 days, versus 120 days for state and local government workers. 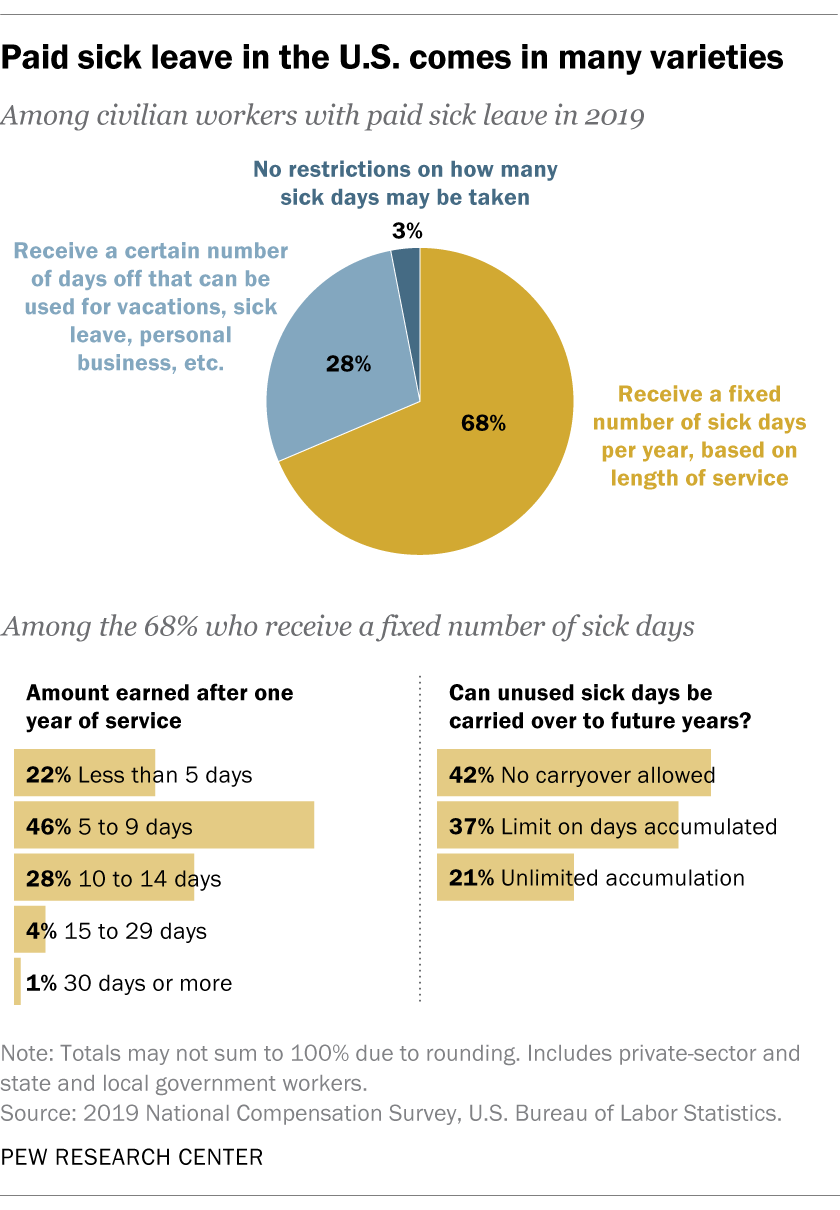 Nearly three-in-ten civilian workers (28%) have paid sick leave as part of a “consolidated leave plan,” where workers receive a set number of days off per year that can be used for several purposes – illness, taking care of a sick child, vacation, personal business and so on. Such plans are slightly more common in the private sector: 32% of private industry workers have them, according to the NCS, but only 11% of state and local government workers do.

A handful of civilian workers – 3%, or roughly 4.2 million – have no limits on how much paid sick leave they can take. Such plans are most common (about 5% of workers apiece) in two rather disparate occupational groups: management, business and financial workers; and natural resources, construction and maintenance workers.