Russian President Vladimir Putin has now been in power for more than two decades. Last month, Putin proposed constitutional amendments that led to the resignation of the Russian Cabinet and the appointment of a new prime minister – steps widely interpreted as a consolidation of Putin’s long-term power.

Globally, people tend to express little confidence in Putin’s ability to do the right thing regarding world affairs. And views of Russia itself mirror these negative evaluations of Putin. In most of the 33 countries surveyed by Pew Research Center in 2019, less than half of adults see Russia favorably.

This analysis focuses on global perceptions of Russia and its leader, President Vladimir Putin. The analysis includes comparisons with Pew Research Center survey data from previous years on the same topics. The post also refers to Russians’ perceptions of the United States.

We used data from surveys conducted in 34 countries from May 13 to Oct. 2, 2019, totaling 38,426 respondents. The surveys were conducted face to face across Africa, Latin America, the Middle East and South Asia, and on the phone in North America and in the Asia-Pacific region. Across Europe, the survey was conducted over the phone in France, Germany, the Netherlands, Spain, Sweden and the UK, but face to face in Central and Eastern Europe, Italy, Ukraine and Russia.

Data from Russia is excluded on questions of Russian favorability and worldwide confidence in Vladimir Putin.

Here are six charts that show how people around the world see Putin and Russia, based on the survey:

In 16 of 33 countries surveyed, more people see Russia unfavorably than favorably. North Americans and Western Europeans are especially critical. Only 18% of Americans and three-in-ten Canadians have a positive opinion of Russia. In Western Europe, a median of only 31% see Russia favorably, including 12% of Swedes, 23% of Dutch respondents and 26% of Britons. 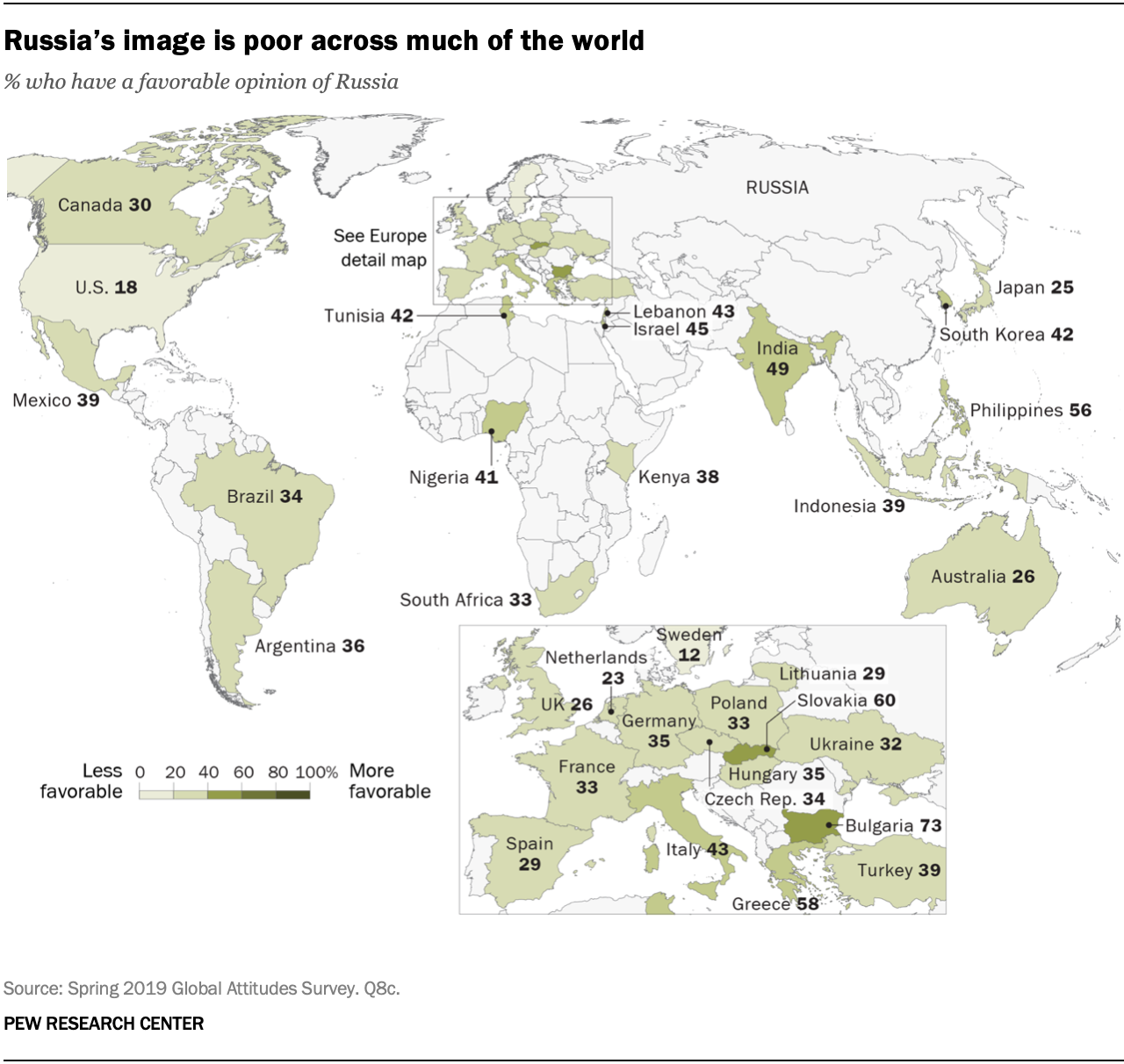 Central and Eastern Europeans are more divided. Majorities in Slovakia (60%) and Bulgaria (73%) see Russia favorably – the most positive ratings the country gets globally. Majorities in Lithuania, Poland, the Czech Republic and Ukraine say the opposite.

Notably, only 34% of people in the Czech Republic have a positive view of Russia, compared with six-in-ten in Slovakia, a wide divergence among nations that used to form a single Soviet republic. Similarly, Germans differ in their views of Russia depending on whether they are in the former East or West Germany: 33% in the former West have a favorable view of Russia, compared with 43% in former East Germany. At least half in both the former West (60%) and East (51%), however, have unfavorable views of Russia.

Evaluations of Russia in other parts of the world also are divided. A median of 41% across the six Asia-Pacific countries surveyed say they have a favorable view of Russia, while a median of 40% say they do not. Only around a quarter in Japan (25%) and Australia (26%) see Russia favorably, contrasted with a 56% majority of Filipinos. In India, 49% have a favorable opinion.

Opinions in the Middle Eastern and North African, sub-Saharan Africa and South American countries polled are similarly divided, though substantial shares of people in these regions do not provide a response. 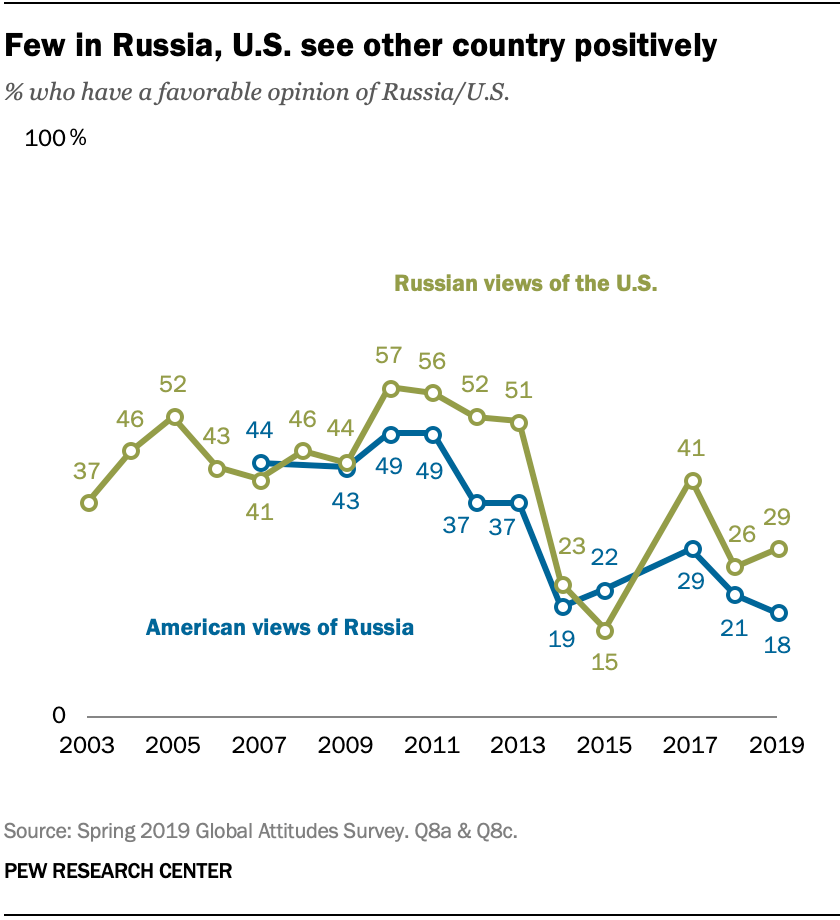 Americans’ views of Russia are now at their lowest point in more than a decade. The 18% of Americans who today have a positive view of Russia is far lower than the 44% who expressed a favorable opinion when the question was first asked in 2007.

Russians’ views of the United States, meanwhile, briefly spiked following the election of Donald Trump, but positive sentiments have since declined. Only about three-in-ten Russians (29%) have a favorable opinion of the U.S. today.

In Western Europe, attitudes toward Russia remain less positive than in the early 2010s. In 2011, roughly half in France (53%), the UK (50%) and Germany (50%) had positive views of Russia, with views in Spain closely trailing (46%). But following Russia’s annexation of Crimea in 2014, there were sharp declines in perceptions of Russia, and those sentiments have mostly persisted. The shares of people with positive views of Russia have ticked up a bit in the UK, Spain and Germany in recent years, but remain lower than they were before the Ukraine conflict. 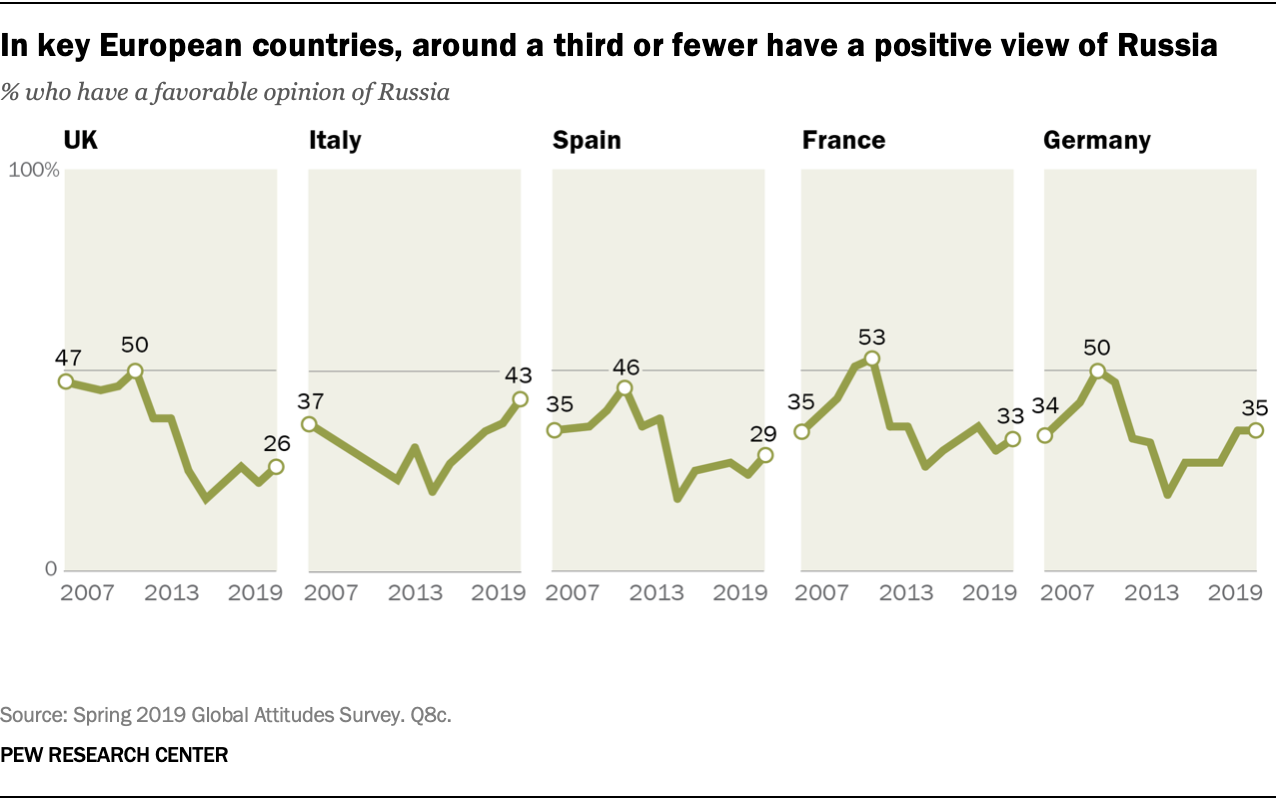 In general, younger people are more likely than their older counterparts to see Russia positively. In Japan, for example, half of those ages 18 to 29 have a favorable opinion of Russia, compared with only 16% of those ages 50 and older. There are double-digit differences following a similar pattern between these age groups in 14 other countries.

In some former Soviet bloc countries, the trend is reversed. In Bulgaria, the Czech Republic and Slovakia, people ages 50 and older are more likely than those ages 18 to 29 to have a favorable attitude toward Russia.

As with evaluations of Russia, confidence in Putin is especially low in North America and Western Europe, where majorities in most countries express no confidence. In the former Soviet republic of Lithuania, seven-in-ten lack confidence in Putin. However, 62% of Bulgarians have confidence in the Russian leader, the highest share across the countries surveyed.

By contrast, Ukrainians are distrustful of Putin:  About eight-in-ten lack confidence in the Russian leader when it comes to world affairs. 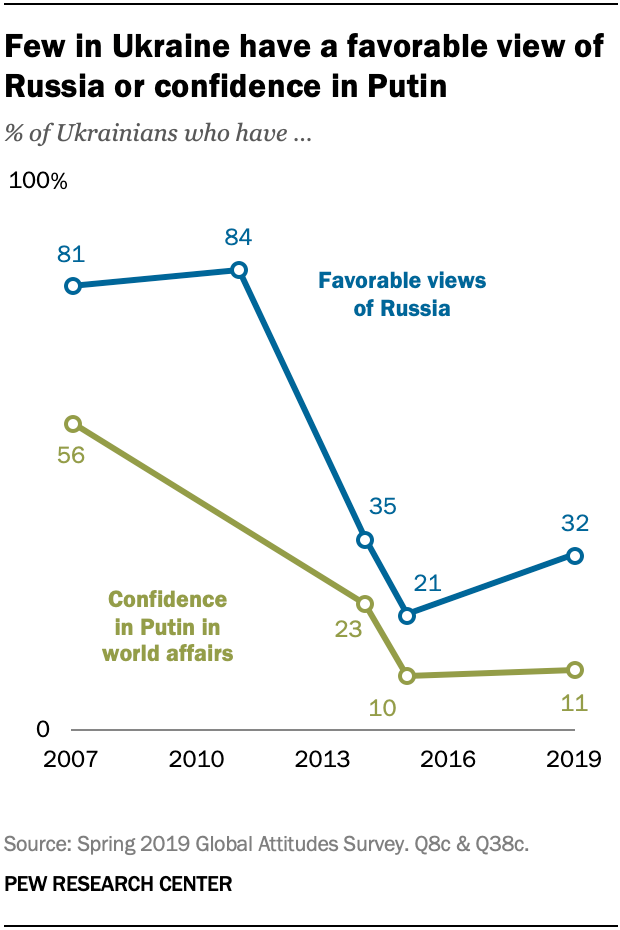 Ukrainians have become much more negative toward Putin and Russia, especially since the annexation of Crimea in 2013. Most Ukrainians expressed confidence in Putin and had a favorable view of Russia in 2007. But, as of 2019, only 11% of Ukrainians have confidence in Putin, while 32% have a favorable opinion of Russia. (The difference in Ukraine may be, in part, as result of changes in sampling after the Russian invasion of eastern Ukraine. For example, Crimea was surveyed in 2014, but was omitted from sampling in 2019 due to security concerns.) 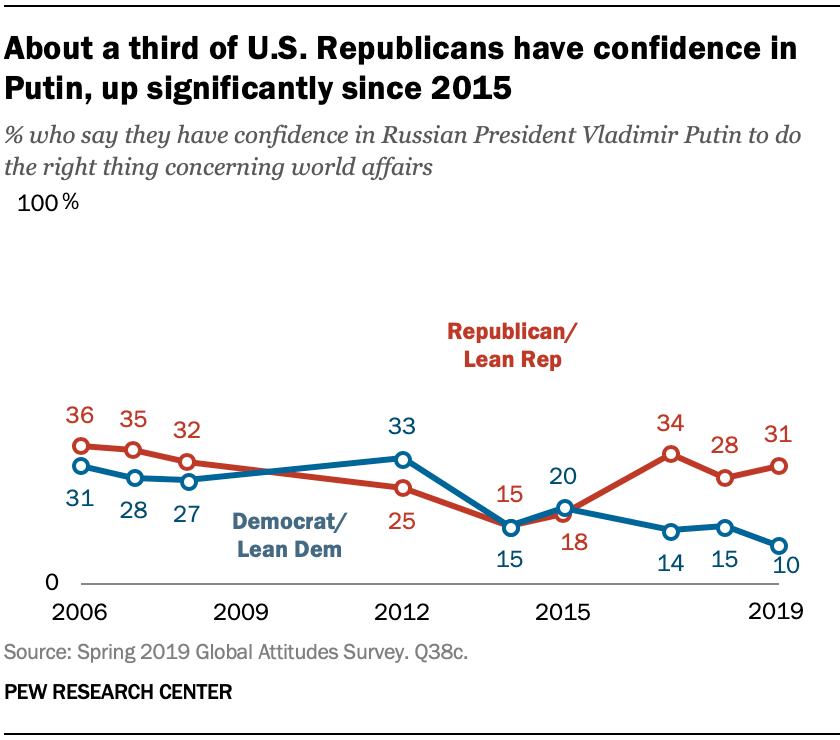 Partisan divisions have emerged in the U.S. when it comes to Putin. Americans consistently have expressed little confidence in Putin to do the right thing on world affairs, but Republicans and Democrats differ somewhat in these views. Republicans and Republican-leaning independents are now 21 points more likely than Democrats and Democratic-leaning independents to express confidence in Putin (31% vs. 10%), the widest partisan gap on this question in Pew Research Center polling.