Most Democratic voters say this year’s caucuses and primaries will do a good job of selecting the best nominee for the November presidential election. And only about a quarter (26%) say it is a bad thing that Iowa and New Hampshire will hold their nominating contests before other states, according to a new Pew Research Center survey. 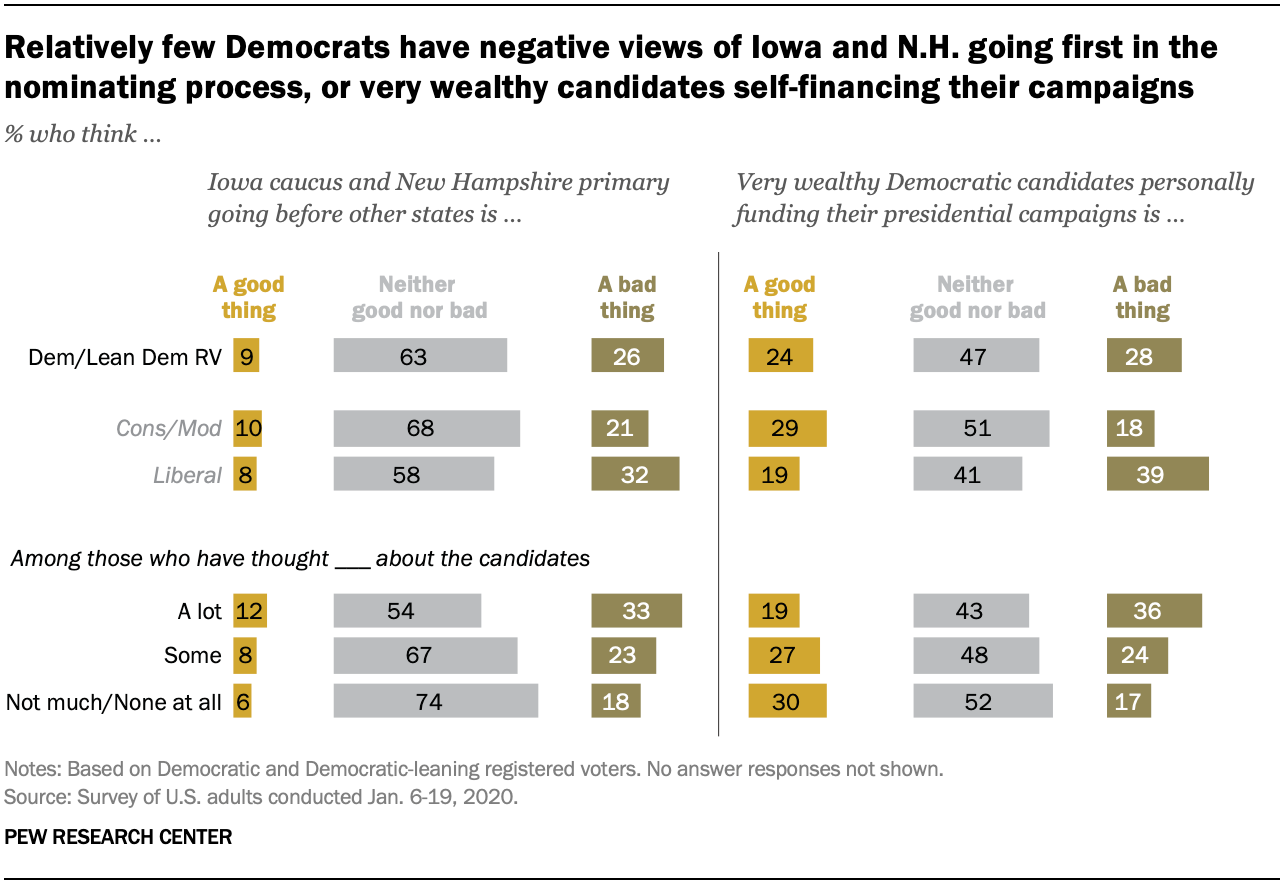 Overall, 63% of Democratic voters say it is neither a good thing nor a bad thing that the Feb. 3 Iowa caucuses and the Feb. 11 New Hampshire primary happen before primary elections or caucuses in other states. Among the remainder, more see this as a bad thing (26%) than a good thing (9%).

About half of Democratic voters (47%) say it is neither good nor bad that some very wealthy candidates are personally funding their campaigns; 28% say this is a bad thing while nearly as many (24%) view this positively.

For this analysis of Democratic voters’ views of the primary process, we surveyed 5,861 Democratic and Democratic-leaning registered voters in January 2020. Everyone who took part is a member of Pew Research Center’s American Trends Panel (ATP), an online survey panel that is recruited through national, random sampling of residential addresses. This way nearly all U.S. adults have a chance of selection. The survey is weighted to be representative of the U.S. adult population by gender, race, ethnicity, partisan affiliation, education and other categories. Read more about the questions asked and the responses, the ATP’s methodology and the methodology for this report.

Liberals, who make up about half of Democrats, are more likely than conservative and moderate Democrats to express negative opinions of Iowa and New Hampshire’s status or of wealthy candidates funding their own campaigns. Even among liberals, though, only about three-in-ten (32%) say the former is a bad thing and only about four-in-ten (39%) say the latter is bad. 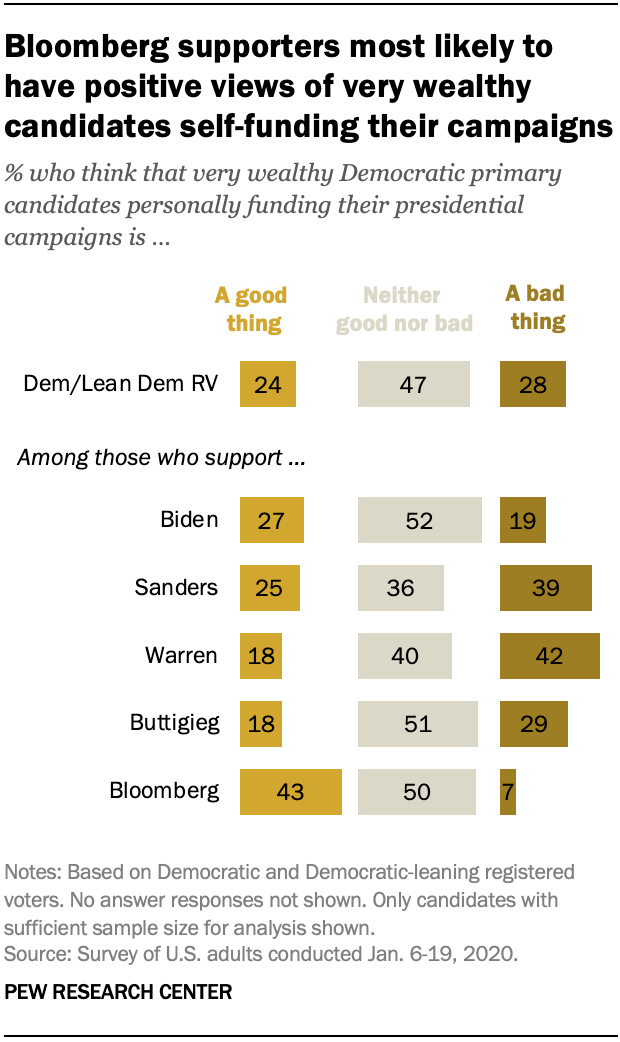 The most engaged Democratic voters also are more likely than less-engaged voters to express negative views on both subjects. Among those who say they have given a lot of thought to the candidates running for president, about a third say that each of these aspects of the primary system is a bad thing.

Democratic voters’ views of the impact of very wealthy candidates financing their own campaigns differ based on which candidates they support.

Bloomberg supporters are far more likely to view very wealthy candidates financing their own campaigns as a good thing (43%) than a bad thing (7%). Half say this is neither good nor bad.

Supporters of other Democrats are more critical of highly wealthy candidates self-funding their presidential bids. For example, among supporters of Elizabeth Warren, more than twice as many view this as bad (42%) than good (18%); 40% say it is neither. 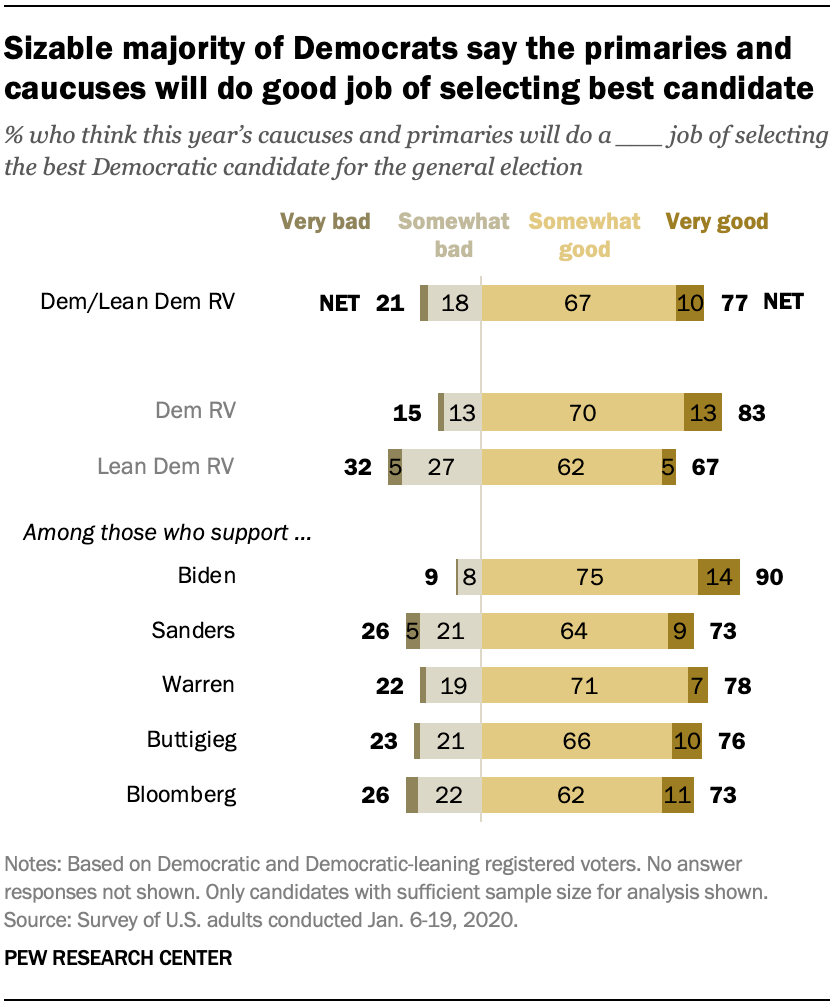 Voters who identify as Democrats are more positive about the primary process than those who lean toward the Democratic Party. Still, majorities in both groups expect the process to do well in selecting the best general election candidate.

What to know about the Iowa caucuses
Latino Democratic voters place high importance on 2020 presidential election
A snapshot of the top 2020 Democratic presidential candidates’ supporters
Among Democrats, Christians lean toward Biden, while ‘nones’ prefer Sanders
Near-record number of primaries this year, but not quite as early