Adults in the U.S. South tend to be more religious than Americans in other parts of the country on a variety of traditional measures. They’re more likely to say that religion is very important to them, that they believe in God with absolute certainty and that they pray daily. And even though teacher-led religious activity in public schools has been restricted by U.S. courts, students retain the right to freely exercise their religion in school, with teens in the South expressing their religion in school more often than teens in other parts of the country, according to a recent Pew Research Center survey.

Praying before sporting events – a practice that has been litigated extensively – is one of the more common expressions of religion at public schools. Among Southern teens, 56% say they “often” or “sometimes” see other students praying before a sporting event at their public school, compared with a quarter or more of teens in the Midwest (34%), West (28%) and Northeast (26%) who say this, according to our survey of 1,811 teens ages 13 to 17. 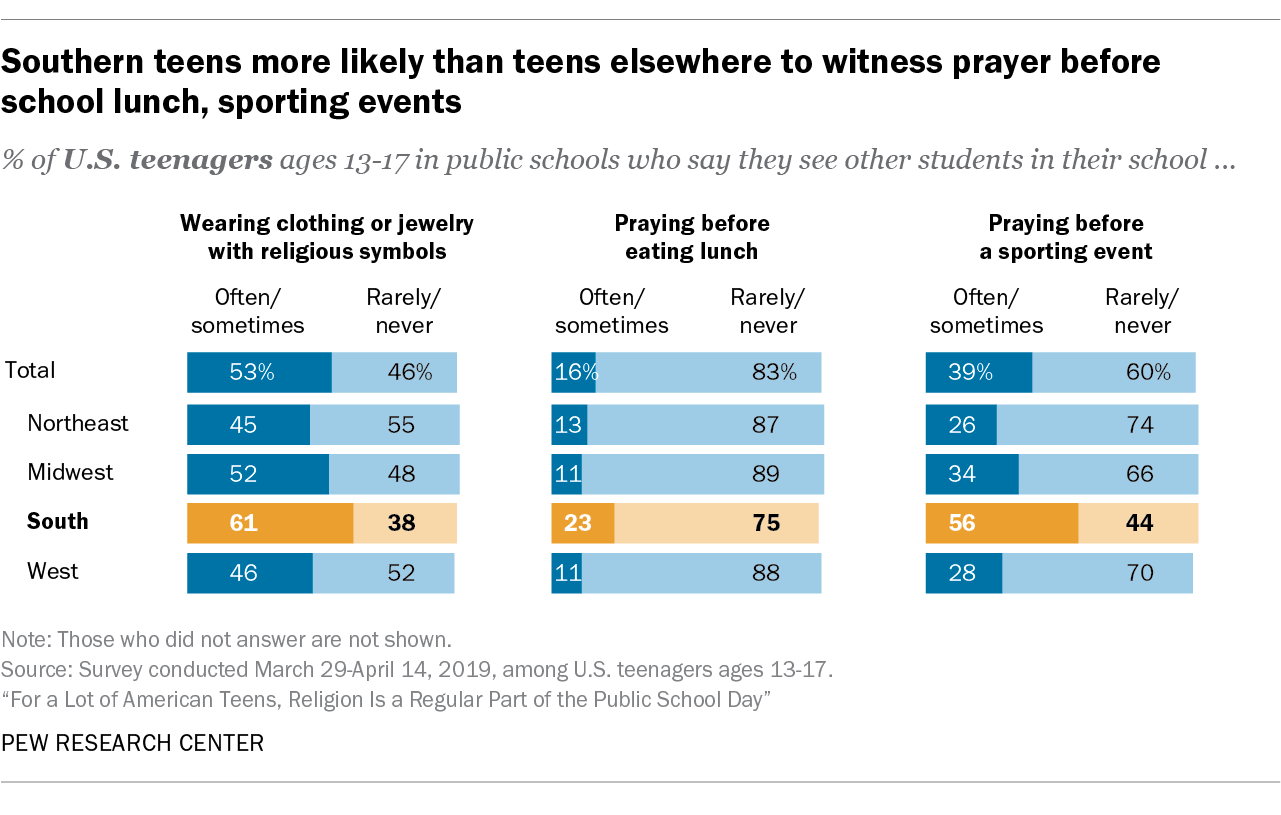 There also are regional differences when it comes to praying before eating lunch at school, although that practice is generally less widespread: Roughly a quarter of Southern teens who attend public schools say they sometimes or often see other students praying before lunch (23%), compared with about one-in-ten who say this in the Northeast (13%), Midwest and West (both 11%).

In addition to asking teens in general about what they witness in their public schools, researchers also asked religiously affiliated students about their personal behaviors. From this perspective, too, religious expression is somewhat more common in the South.

Among religiously affiliated Southern teens, roughly four-in-ten say they regularly pray before eating lunch at their public school (38%), compared with smaller shares in the Midwest (23%), West (20%) and Northeast (13%) who say this. Teens in the South (31%) also are more likely than teens in the West (21%) and Northeast (14%) to invite other students to religious youth groups or worship services. 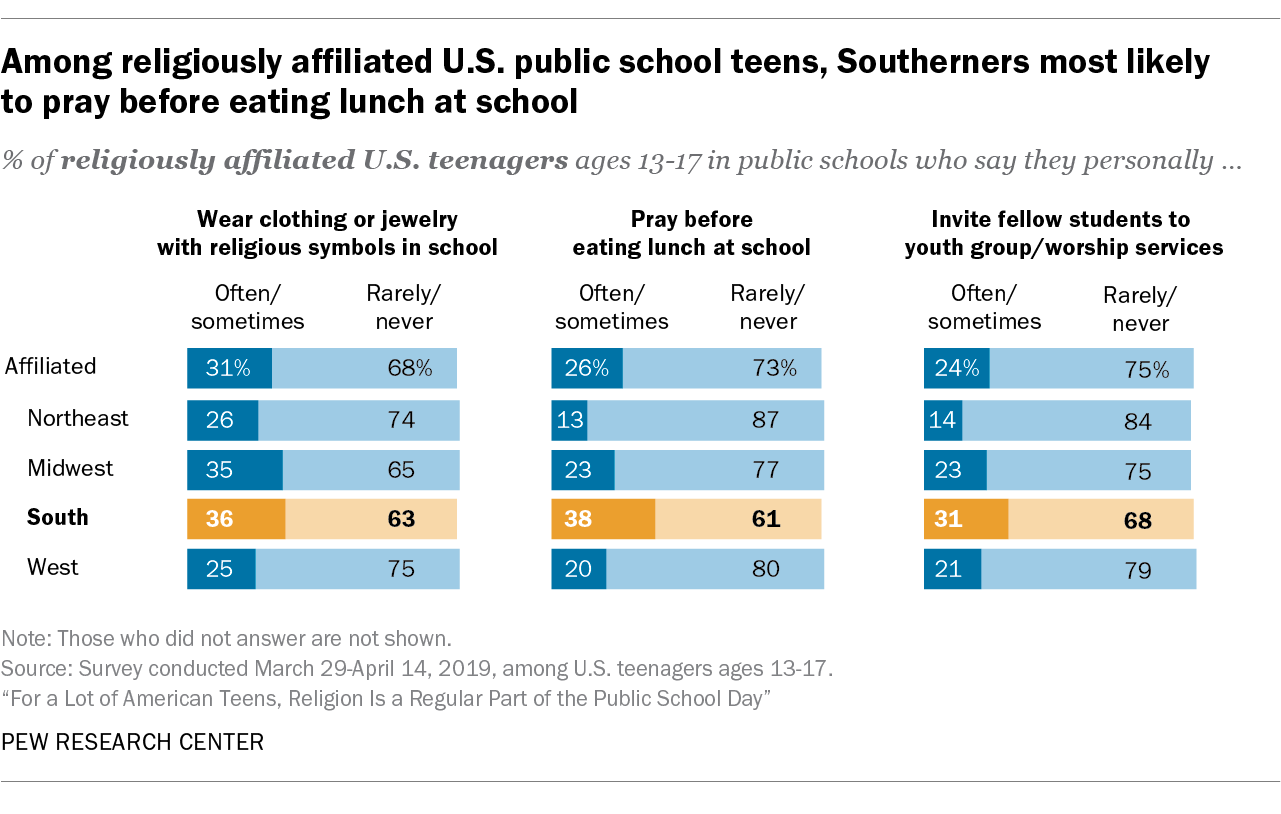 The wearing of clothes or jewelry with religious symbols (such as an Islamic headscarf or a necklace with a Christian cross) is the religious expression that teens across the country are most likely to observe. Teens in the South are the most likely to say they sometimes or often see others wear religious symbols at school (61%), though teens in the Midwest (52%), West (46%) and Northeast (45%) also see this. 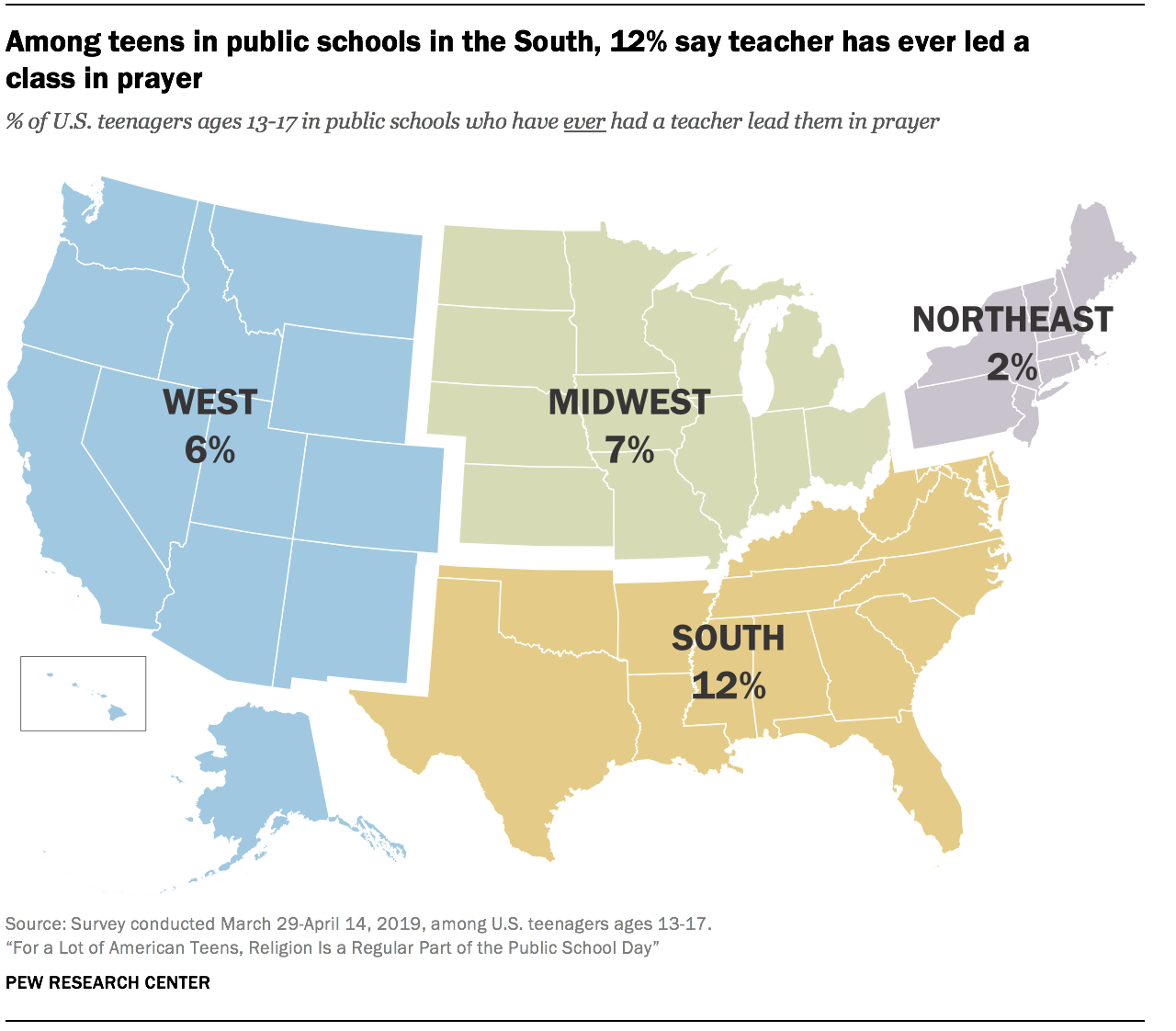 The U.S. Supreme Court, meanwhile, has indicated that it’s fine for teachers to read from the Bible in class as an example of literature, but just 13% of Southern teens in public school and 8% of public school teens overall say they have ever had a teacher do this.