About one-in-seven U.S. adults (15%) say they have ever used a mail-in DNA testing service from a company such as AncestryDNA or 23andMe, according to a new Pew Research Center survey. Most of them say they did so to learn more about their family origins, and a notable share say the results surprised them.

These findings come amid the growing availability and popularity of direct-to-consumer DNA testing and as media attention to personal stories of revelations about identity and newly discovered relatives abounds. 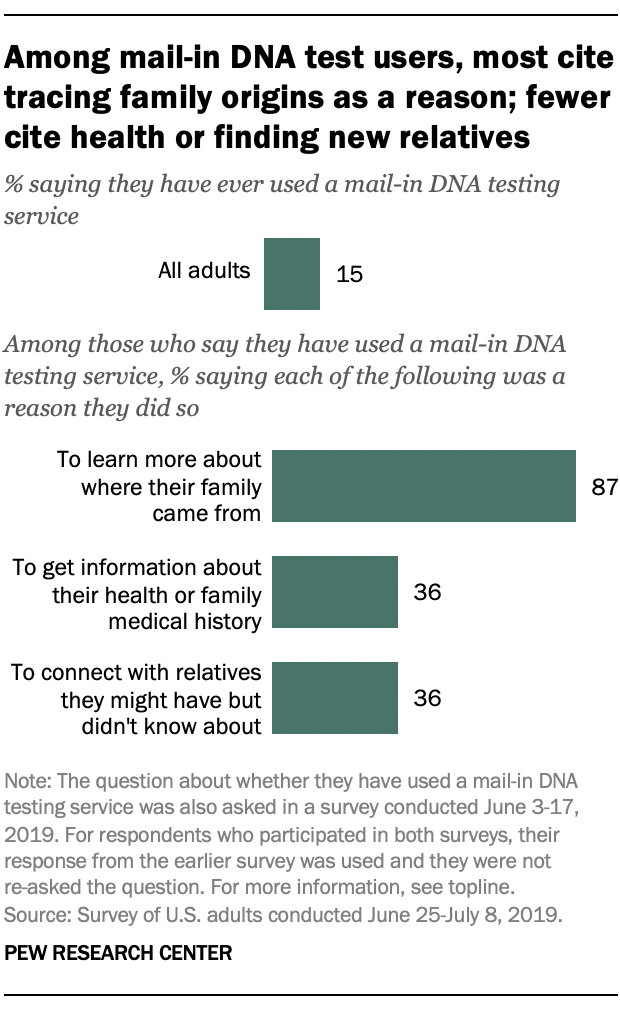 When asked about their reasons for using a mail-in DNA testing service, the vast majority of those who have done so (87%) say they wanted to learn more about where their family came from. About a third say they did so to get information about their health or family medical history (36%) and to connect with relatives they might have but didn’t know about (also 36%).

For the most part, people’s DNA test results about their family history line up with their expectations – but a substantial portion of mail-in test users view some of the findings as unforeseen. 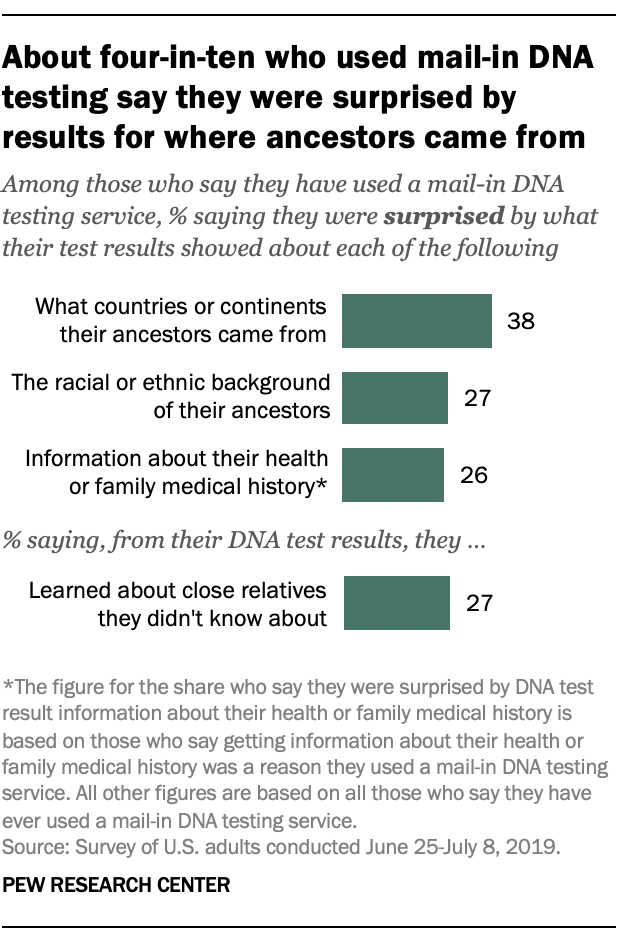 About four-in-ten (38%) say they were surprised by what their DNA test results showed about what countries or continents their ancestors came from, while 27% express surprise at what these results indicated about their ancestors’ racial or ethnic background.

Nonwhite Americans are far more likely than whites to say they were surprised by what their DNA results showed about their ancestors. For example, 42% of nonwhite adults say they were surprised by the findings concerning the racial or ethnic background of their ancestors, compared with 22% of whites. (There aren’t enough respondents among different racial and ethnic minority groups in the sample who say they have used mail-in DNA testing to report results for each group separately.)

In addition, DNA test results highlighted new family ties for a notable share of mail-in test users. Roughly a quarter (27%) of those who say they have used mail-in DNA testing say they learned about close relatives they didn’t know about previously.

When it comes to the impact their DNA test results have had on how they view themselves, 15% of mail-in test users say their results changed the way they think about their racial or ethnic identity. Nonwhites are twice as likely as whites to say this (24% vs. 12%).

Age differences are also evident: 23% of adults younger than 50 say their results altered how they see their racial or ethnic identity, compared with just 8% of those ages 50 and older.

Differences also emerge across racial and ethnic groups, with whites more likely than blacks and Hispanics to report having used a mail-in DNA testing service (17% vs. 10% each).

About half of Americans are OK with DNA testing companies sharing user data with law enforcement
Half of Americans have decided not to use a product or service because of privacy concerns
A third of U.S. adults say they have used fertility treatments or know someone who has
As the pandemic persisted, financial pressures became a bigger factor in why Americans decided to move
10 new findings about faith among Black Americans