Americans ages 60 and older are alone for more than half of their daily measured time – which includes all waking hours except those spent engaged in personal activities such as grooming. All told, this amounts to about seven hours a day; and among those who live by themselves, alone time rises to over 10 hours a day, according to a new Pew Research Center analysis of Bureau of Labor Statistics data. 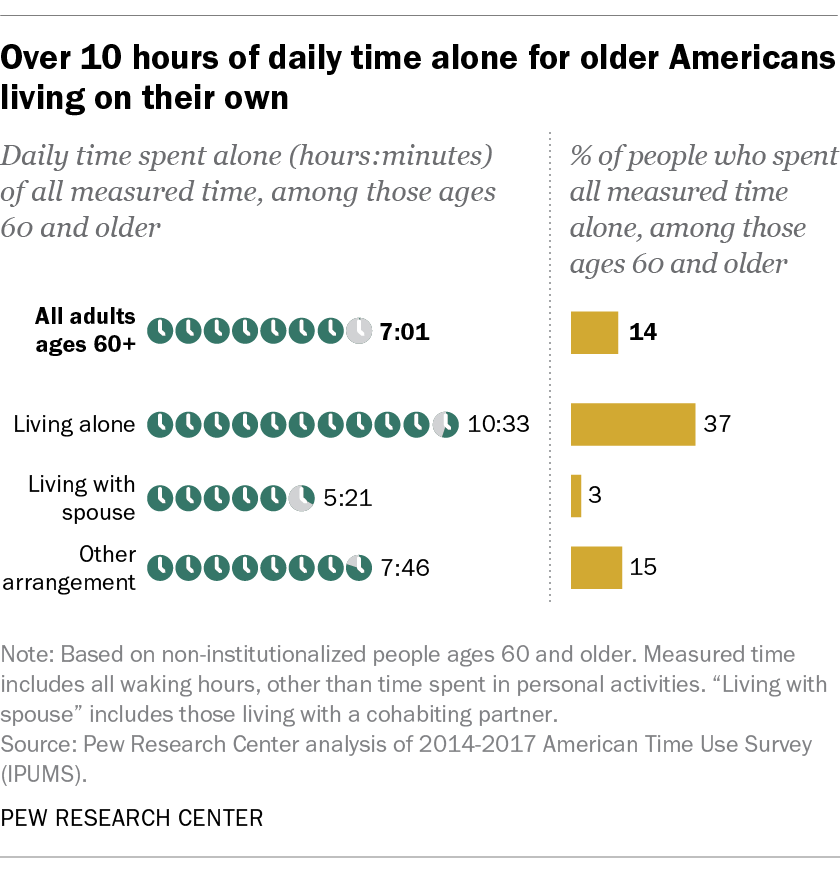 In comparison, people in their 40s and 50s spend about 4 hours and 45 minutes alone, and those younger than 40 spend about three and a half hours a day alone, on average. Moreover, 14% of older Americans report spending all their daily measured time alone, compared with 8% of people younger than 60.

While time spent alone is not necessarily associated with adverse effects, it can be used as a measure of social isolation, which in turn is linked with negative health outcomes among older adults. Medical experts suspect that lifestyle factors may explain some of this association – for instance, someone who is socially isolated may have less cognitive stimulation and more difficulty staying active or taking their medications. In some cases, social isolation may mean there is no one on hand to help in case of a medical emergency.

People ages 60 and older currently account for 22% of the U.S. population – 73 million in all. It’s estimated this share will rise to 26% by 2030, fueled by the aging of the Baby Boom generation. The well-being of older adults has become a topic of much interest both in the United States and in other developed nations, particularly as it relates to social connection.

Not surprisingly, time alone is closely associated with living arrangements, for both younger and older Americans. About one-in-four adults ages 60 and older (23%) live alone today – 16.7 million in all. These older adults say they spend, on average, about 10 and a half hours alone each day – almost twice as much time as those who live with a spouse. More than a third (37%) of older adults who live alone report spending all their measured time alone. Among those who live with someone other than a spouse, the average amount of alone time a day is seven and a half hours. (The 3% of older adults who are living in institutionalized settings are not included in this analysis.)

There are significant variations by age, gender and education in time spent alone daily, driven in part by differences in marriage and living arrangements. For instance, people in their 60s report 6 hours and 32 minutes of alone time, compared with 7 hours and 28 minutes for people in their 70s and 7 hours and 47 minutes for people ages 80 and older. These age differences are due in part to the fact that that older people are far less likely to live with a spouse or cohabiting partner – 64% of those in their 60s do, compared with 59% of those in their 70s and 36% of those 80 and older. 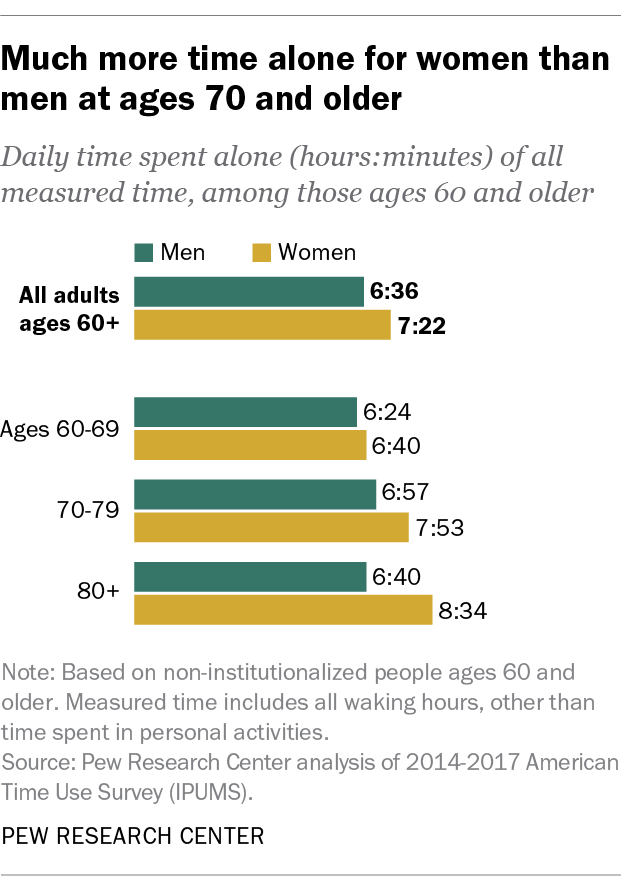 Older women spend more time alone, on average, than their male counterparts, and this gap widens markedly at the oldest ages. This is largely due to the fact that women ages 60 and older are more likely than their male counterparts to live alone (28% vs. 18%) given their longer life expectancies and higher rates of widowhood – and this gap in living arrangements also widens with age.

While there aren’t significant gender differences in time spent alone for people in their 60s, for instance, women ages 80 and older spend about eight and a half hours a day alone, compared with 6 hours and 40 minutes for comparable men. When it comes to the share spending all measured time alone, there are no gender differences among all people ages 60 and older, but again a gap emerges at older ages – for people ages 80 and older, 20% of women report spending all measured time alone, compared with 13% of men.

This gender pattern in alone time reverses once gender differences in living arrangements are accounted for, suggesting other factors are also in play. While 43% of men 60 and older who live alone report spending all of their time alone, this share is lower for women who live alone (34%). And among those living with someone other than a spouse, 21% of men report spending all measured time alone, compared with 12% of women. The fact that older women are more likely than men to be involved in activities outside the home such as going to church or volunteering may partly explain this pattern.

Differences in time spent alone also emerge across educational levels. People ages 60 and older who have a high school diploma or less education spend, on average, 7 hours and 18 minutes a day alone – about 45 more minutes than their counterparts with a bachelor’s degree. These patterns reflect in part the fact that less educated people are less likely to be married and living with a spouse than their more educated counterparts. (This is true among younger adults as well.) About half (51%) of adults ages 60 and older with a high school diploma are living with a spouse, compared with 59% of those with some college education or an associate degree and 67% of those with a bachelor’s degree.

This analysis is based primarily on time diary data from the American Time Use Survey (ATUS), which has been sponsored by the Bureau of Labor Statistics and annually conducted by the U.S. Census Bureau since 2003. The ATUS produces a nationally representative sample of non-institutionalized respondents, drawn from the Current Population Survey. The ATUS is not representative of people in nursing homes or other similar institutions.

Analyses of time use data are based on respondents in the 2014-2017 ATUS sample (referred to in the text as “2015”). Multiple years of data were combined in order to produce large enough sample sizes to allow for subgroup analysis.

The time diaries also collect data regarding who each respondent was physically with for all activities other than sleep and personal care such as grooming. This “measured time” captures about 94% of the waking hours of people ages 60 and older. “Alone time” is the amount of this measured time each respondent spends physically alone. Since measured time does not capture all waking hours, the alone time measure may be an underestimate of total time spent alone.

If a respondent is physically alone but talking on the phone or using a computer for leisure, they would be counted as “alone.” Other analysis of time use data suggest that people 60 and older spend less than a half hour a day engaged in these activities.

A small share of respondents who are “living with a spouse” are actually living with a cohabiting partner. Other research indicates that many adults in “other living arrangements” are living with other family members, typically their grown children.