Women are approaching a milestone in gender parity. 2019 will likely be the first year in which they are a majority of the college-educated labor force. As of the first quarter of 2019, 29.5 million women in the labor force had at least a bachelor’s degree, effectively matching the number of college-educated men in the workforce (29.3 million), according to a new Pew Research Center analysis of data from the U.S. Bureau of Labor Statistics. 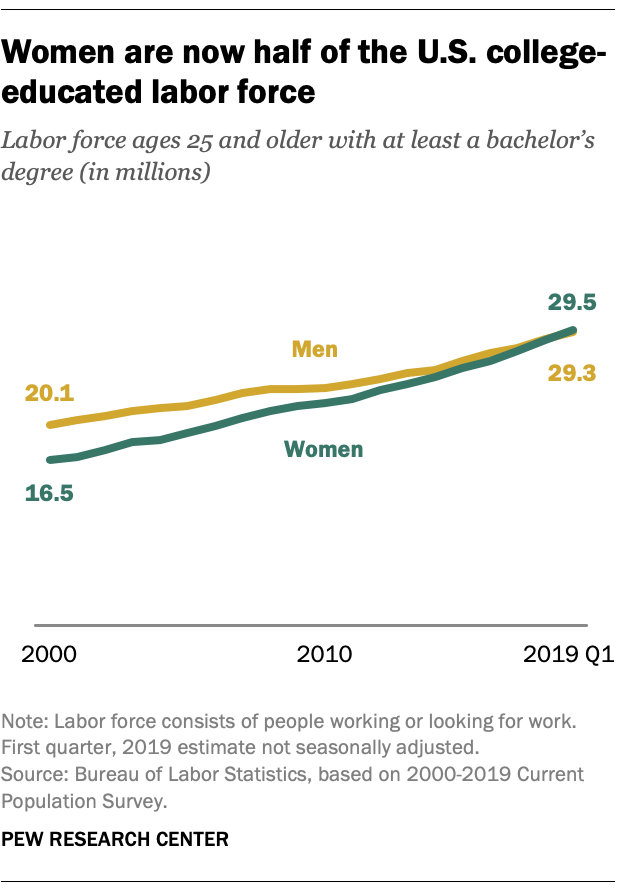 This milestone matters for women because educational attainment is highly correlated with income. Women now comprise 50.2% of the college-educated labor force, up from 45.1% in 2000. They remain less than half (46.7%) of the overall workforce ages 25 and older.

Women’s growing representation among the college-educated labor force has important economic implications for individual workers and the economy. Census Bureau figures show that the typical worker (ages 25 and older) earned $41,900 in 2017, but a worker with at least a bachelor’s degree earned $61,300. (The earnings bump associated with a bachelor’s degree is larger for men than women. The median earnings of college-educated men is $74,900, compared with $50,200 for men overall. The typical college-educated woman earns $51,600, versus $36,000 for women overall.) About a third (35%) of U.S. adults 25 and older are college educated, but these individuals generate 57% of the economy’s earnings – $4.7 trillion out of $8.4 trillion total labor market earnings in 2017.

U.S. women may be far from parity in many facets of society – particularly in top positions in business and government – but they are making inroads in the upper echelon of the labor market. The growing number of college-educated women in the labor force translates into greater earning potential for women overall and could eventually contribute to the narrowing of the gender wage gap.

6 facts about U.S. moms
How Millennials today compare with their grandparents 50 years ago
10 facts about American workers
Racial, gender wage gaps persist in U.S. despite some progress
In many countries, at least four-in-ten in the labor force are women