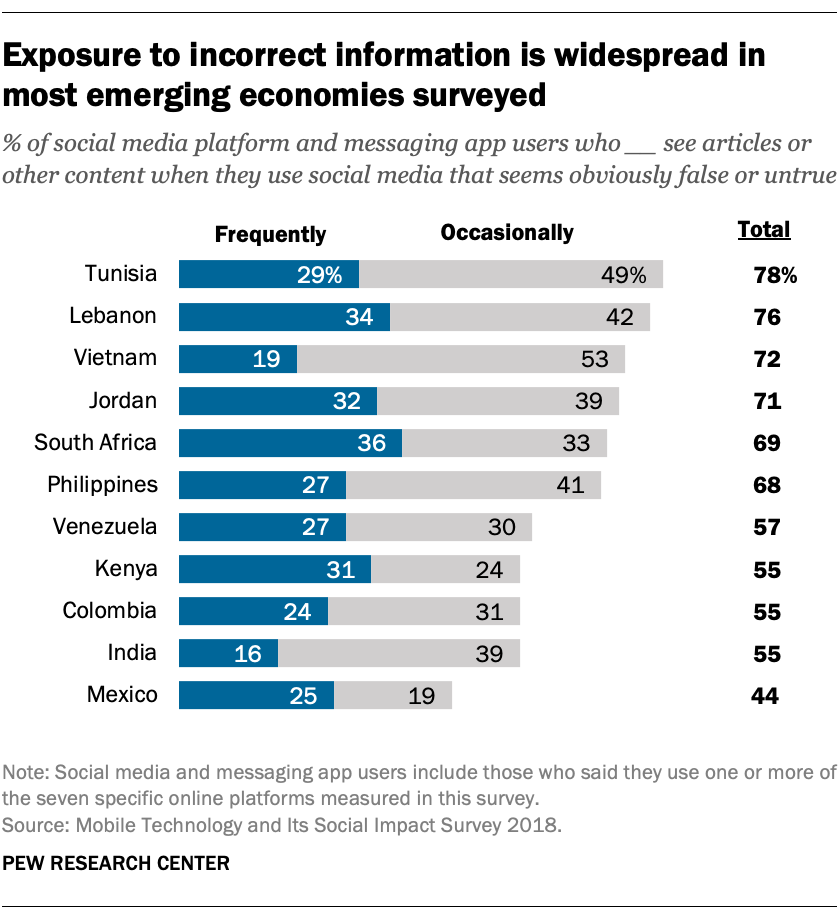 Exposure to false or incorrect information is a key concern for people in 11 emerging economies, according to a recent Pew Research Center survey. Many social media users report being regularly exposed to misinformation when using the platforms. In most countries surveyed, more than a quarter of social media and messaging app users say they frequently encounter this sort of content, and majorities in 10 of the 11 countries say they see it at least occasionally.

A median of 64% of adults across the countries surveyed say people should be very concerned about exposure to false or incorrect information when using their mobile phones. In India, a country where journalists and politicians have focused on the dangers of misinformation for their election, this concern is second only to the worry that children will be exposed to immoral information.

Focus groups conducted by the Center in advance of the survey highlighted people’s different experiences with false or incorrect information. Even though the bulk of the sessions were conducted in other languages, the phrase “fake news” was sometimes mentioned in English. Some participants mentioned challenges in knowing the source of the posts they saw on social media, difficulties verifying the things they encountered there or having to triangulate among multiple sources to determine what was true and what was not. Others worried about posts seeking to actively mislead people or stoke animosity between political parties (in the Philippines and Mexico) or tribes (in Kenya).

The survey results show that people who say they at least occasionally encounter content on social media that seems obviously false tend to perceive the impact that digital connectivity has on other facets of their societies more negatively. They are more likely to say that access to technology has made people easier to manipulate with false information and rumors; that social media have increased the risk that people in their country might be manipulated by domestic politicians; or that foreign powers might interfere in their country’s elections. They also are concerned that digital connectivity has made people in their country more divided in their political opinions and that the news and information they get on social media is more hateful than the content they get from other sources. 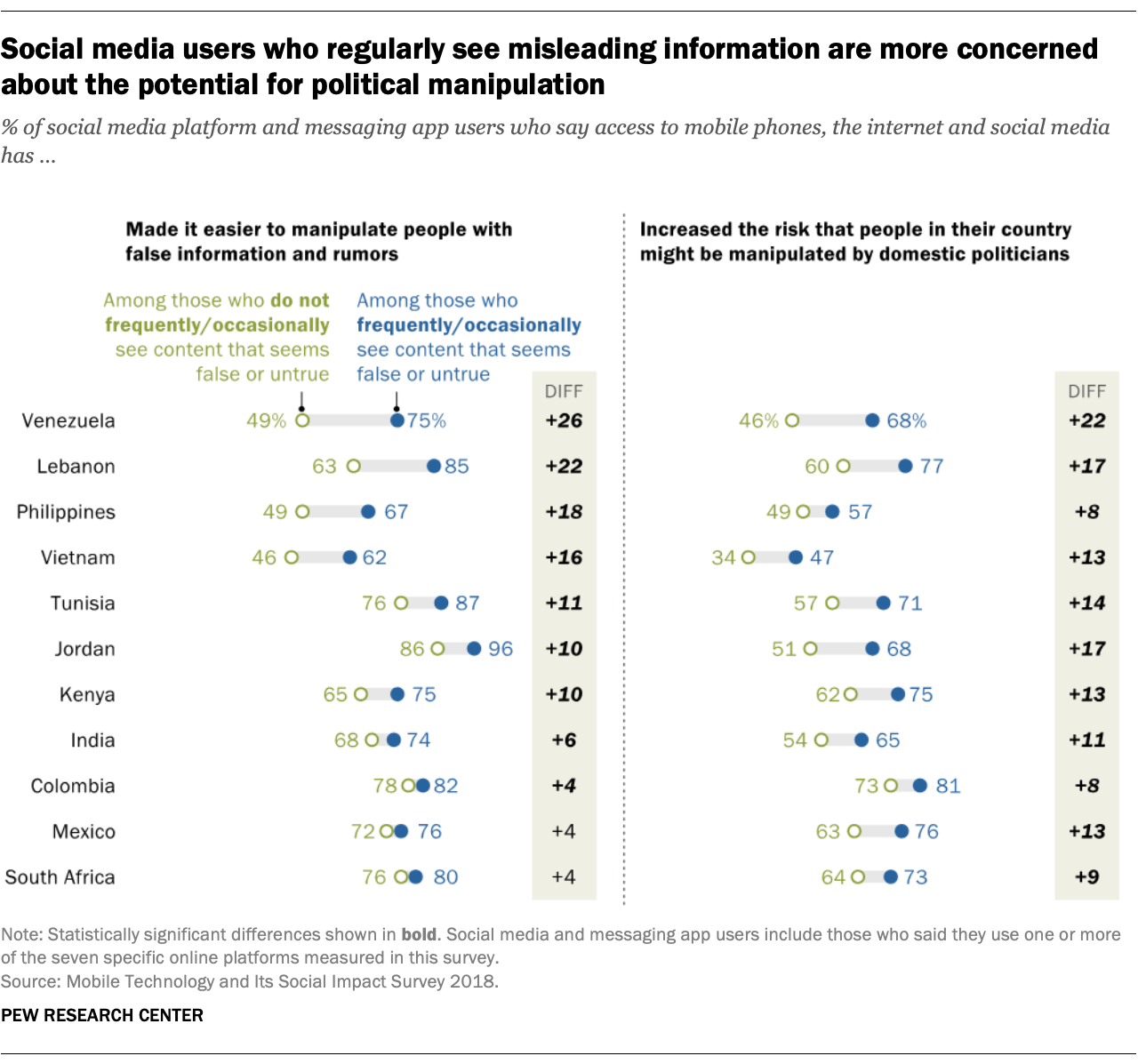 Those who regularly see content that seems false or misleading also tend to be heavier social media users. That is, they are more likely to use multiple social media platforms and messaging apps and more likely to say social media are very important for helping them keep up with political news and other developments in the world.

But those who say they regularly see content that seems false also are exposed to some of the more positive elements of digital connectivity. For example, upwards of around four-in-ten social media users in almost every country say they regularly encounter articles and other content that introduces them to new ideas in addition to content that seems false or misleading when they use social media. Fewer than 15% of social media users see only false or obviously untrue content without this concurrent positive exposure. 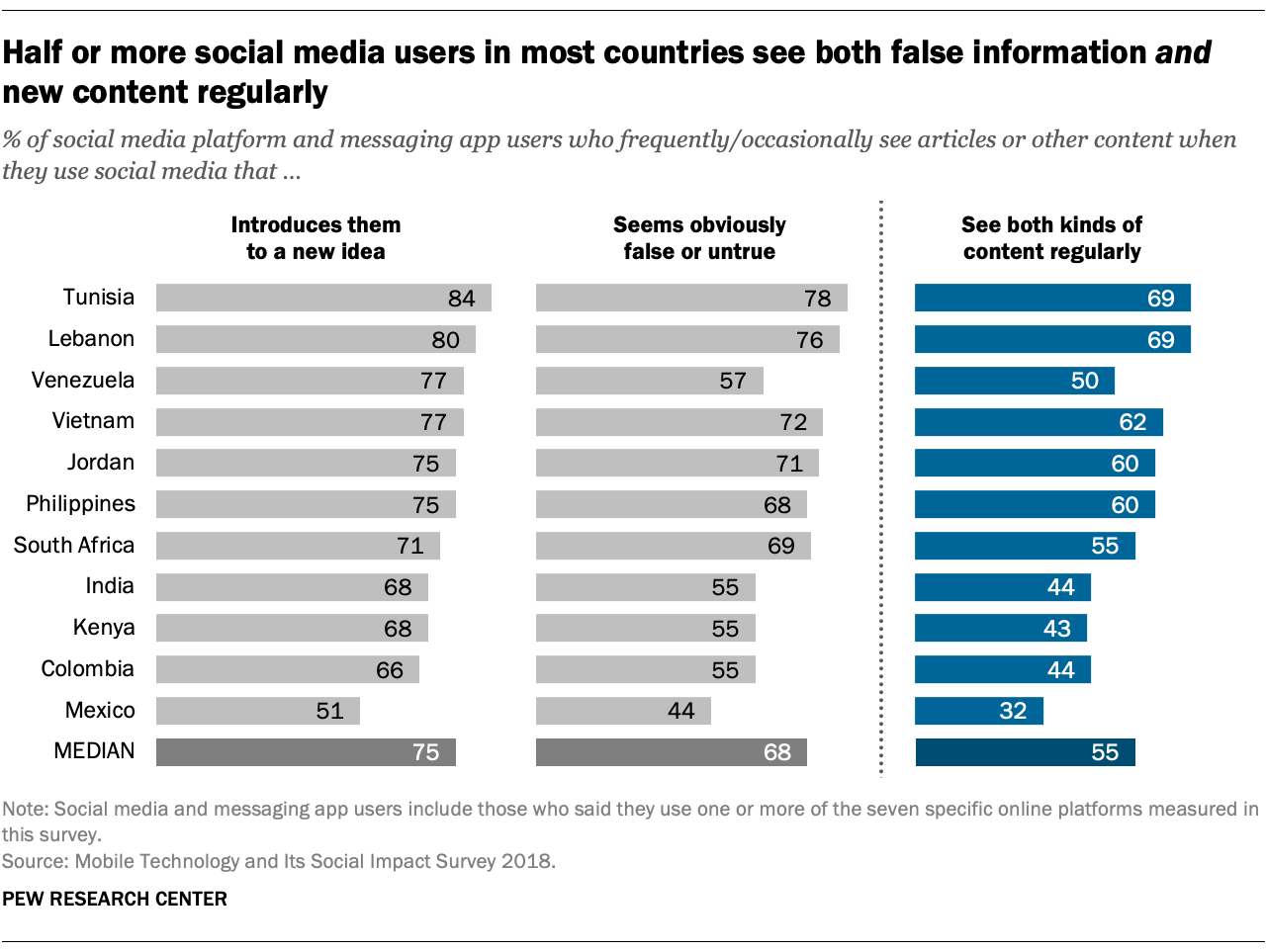 This highlights the double-edged quality to social media that people in these 11 countries perceive. They see and worry about the baleful effects but can also speak to its benefits. Even those who regularly see false or misleading content are not unambiguously critical of social media. For example, this part of the population is more likely than other social media users to say social media increase people’s ability to have a meaningful voice in politics.

Statistical analysis shows, though, that those who see false and misleading information come away with a darker view about social media’s impact on society: Those who see more false content are more likely to say technology divides people politically and makes it easier for domestic politicians to manipulate them.