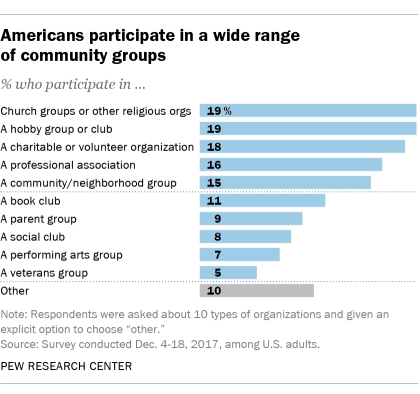 Participation rates are even higher among the roughly seven-in-ten Americans who say it is important to belong to a community that shares their values. Among this group, the share who participate in at least one organization (62%) is substantially higher than the 44% of all others who say they are involved in their community in one of these ways.

There also are some differences along age and racial/ethnic lines. Notably, adults who have reached retirement age are more likely to be involved – two-thirds of Americans ages 65 and older say they participate in at least one community organization, compared with 55% of younger adults. And blacks (62%) and whites (59%) are more likely than Hispanics (49%) to say they are active in at least one community group.