However, younger people remain more likely than their older counterparts to say organics are healthier than conventionally grown food. Some 54% of those ages 18 to 29 and 47% of those ages 30 to 49 believe organic fruits and vegetables are generally better for one’s health, compared with 39% of those 65 and older who say the same. As in the 2016 survey, there are no differences among men and women on views of the healthfulness of organic foods.

These latest findings come as consumers sort through ongoing public debates over how the foods we eat can affect our health. Today, the perception of what constitutes a “healthy” diet can be in the eye of the beholder, as even the U.S. Food and Drug Administration wrestles with new guidelines for which food products can legally have “healthy” printed on their labels.

About four-in-ten U.S. adults (39%) estimate that most (7%) or some (32%) of the food they eat is organic. A majority of this group (68%) believes that organic fruits and vegetables are better for health than conventionally grown options. By comparison, 32% of those who report eating no organic foods or not too much believe that organic produce is better for one’s health.

Organic farming strives to eliminate the use of conventional pesticides and fertilizers so that fruits, vegetables and grains have substantially lower levels of those chemicals. Farmers also pledge that organic crops are not genetically modified (GM).

The retail value of organic produce has prompted some importers to attach fake organic labels to produce. Some farmers worry that such scams, along with new efforts at government deregulation, could chip away at public confidence that foods labeled “organic” are truly what they say they are. 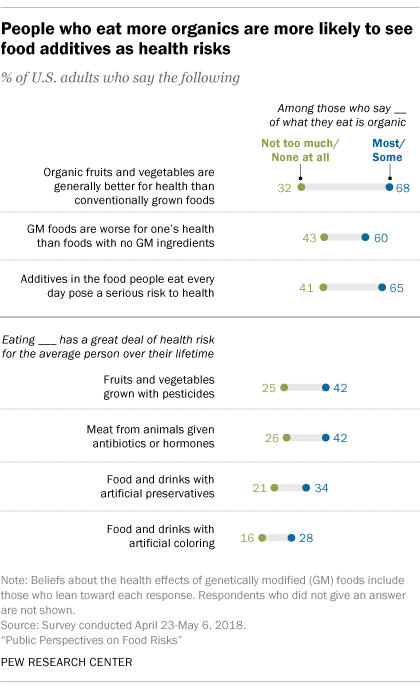 Also, a majority of people (65%) who estimate that most or some of their diet is organic believe that food additives pose a serious risk to health over a person’s lifetime, versus 41% among those who report eating no organic foods or not too much.

More specifically, 42% of U.S. adults who say most or some of the food they eat is organic believe that eating fruits and vegetables grown with pesticides has a great deal of health risk for the average person over their lifetime. In comparison, just 25% of those who eat not too much or no organic food share that view.