The United States is a nation divided when it comes to food. About half of U.S. adults (49%) are “health-oriented eaters” who say that they choose foods all or more than half the time because they are healthy and nutritious. The other half (51%) are less focused on healthy foods, saying they select foods because of their health and nutritional value about half the time or less, according to a recent Pew Research Center survey. 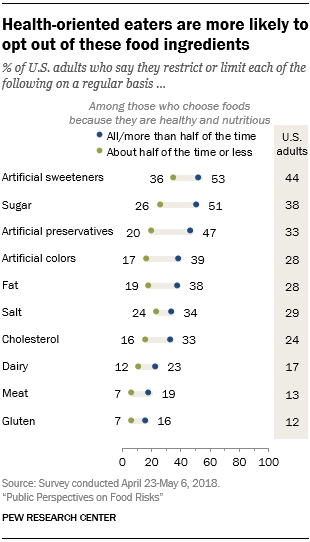 Americans’ food preferences are especially evident in what they don’t eat. When asked how frequently they limit consumption of foods (based on a list of 10 items), those who choose foods because they are healthy and nutritious ruled out, on average, 3.5 ingredients. By contrast, people less health-oriented in their eating restrict an average of only 1.8 of these ingredients from their diets. 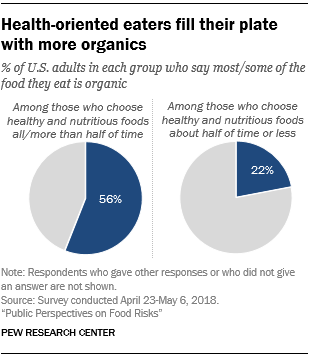 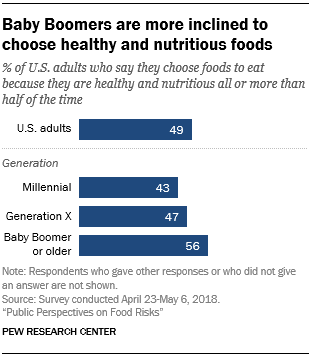 Who comprises the ranks of these health-oriented eaters? They are more likely to be Baby Boomers than Millennials. Some 56% of those in the Baby Boomer or older generations say they pick foods because they are healthy and nutritious at least more than half of the time, compared with 43% of Millennials.

Americans with higher family incomes also stand out as more likely to make health-oriented food choices. Among those whose family income is $100,000 or higher, 58% say they choose foods based on health and nutrition more than half of the time or always, compared with 45% of those with incomes less than $30,000. And larger shares of women than men are health-oriented eaters (52% vs. 45%).