For most of its first half-century, the European Union consisted almost entirely of countries from Western Europe, such as France, Italy and Belgium. That changed in 2004, when the EU expanded to include some former Soviet bloc countries in Central and Eastern Europe, including Hungary, Poland and Estonia.

While the EU has integrated its new member states into its governing structures, there are some significant differences in public attitudes between its Western European countries and its Central and Eastern European countries, according to a new analysis of Pew Research Center surveys conducted between 2015 and 2017. 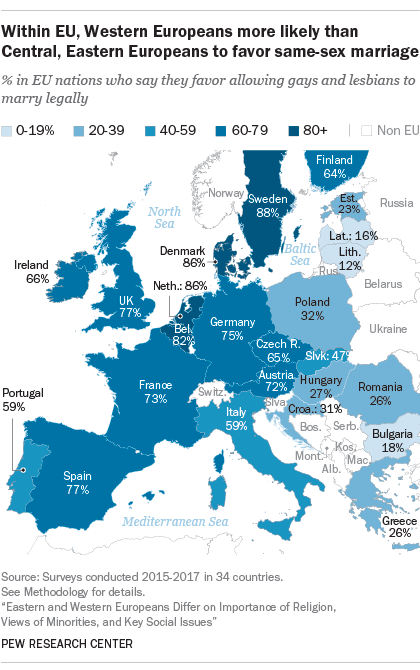 4The EU’s Central and Eastern Europeans are more likely than its Western Europeans to say their own culture is superior to others. The Center asked respondents if they agree with the statement, “Our people are not perfect, but our culture is superior to others.” Of the five EU countries where more than half the respondents say they agree with this statement, all are located in Central and Eastern Europe: Greece (89%), Bulgaria (69%), Romania (66%), Poland (55%) and the Czech Republic (55%). In addition, people in Central and Eastern European countries are more likely than those in Western Europe to emphasize certain nativist elements of national identity. For instance, roughly eight-in-ten Poles say that being born in Poland (82%) and having ancestry there (83%) are important to being truly Polish, while far fewer Germans (48% and 49%, respectively) say this about being truly German.

6Western Europeans in the EU are less religiously committed than their Central and Eastern European counterparts. On balance, adults in Western Europe are less likely than those in Central and Eastern Europe to say that religion is very important in their lives, that they pray every day, and that they attend religious services at least monthly. For example, just 11% in Germany and 10% in the United Kingdom say that religion is very important in their lives, compared with 55% of adults in Greece and 50% in Romania. That said, Europeans across the continent are, by a number of measures, generally less religious than adults in other regions surveyed by Pew Research Center, such as sub-Saharan Africa, Latin America and the United States.

Where Americans and Europeans agree – and differ – in the values they see as important
Tepid support for democracy among both young and old in Central and Eastern Europe
Greek attitudes toward religion, minorities align more with Central and Eastern Europe than West
5 facts about Catholics in Europe
10 key takeaways about public opinion in Europe 30 years after the fall of communism