Some 15% of U.S. households with school-age children do not have a high-speed internet connection at home, according to a new Pew Research Center analysis of 2015 U.S. Census Bureau data. New survey findings from the Center also show that some teens are more likely to face digital hurdles when trying to complete their homework. 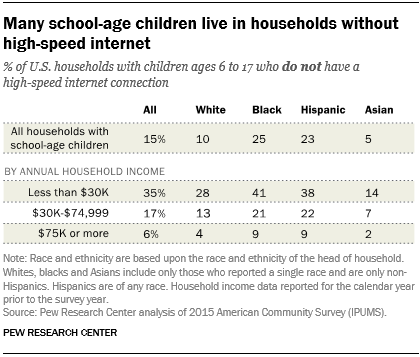 This aspect of the digital divide – often referred to as the “homework gap” – can be an academic burden for teens who lack access to digital technologies at home. Black teens, as well as those from lower-income households, are especially likely to face these school-related challenges as a result, according to the new Center survey of 743 U.S. teens ages 13 to 17 conducted March 7–April 10, 2018.

At its most extreme, the homework gap can mean that teens have trouble even finishing their homework. Overall, 17% of teens say they are often or sometimes unable to complete homework assignments because they do not have reliable access to a computer or internet connection.

This is even more common among black teens. One-quarter of black teens say they are at least sometimes unable to complete their homework due to a lack of digital access, including 13% who say this happens to them often. Just 4% of white teens and 6% of Hispanic teens say this often happens to them. (There were not enough Asian respondents in this survey sample to be broken out into a separate analysis.) 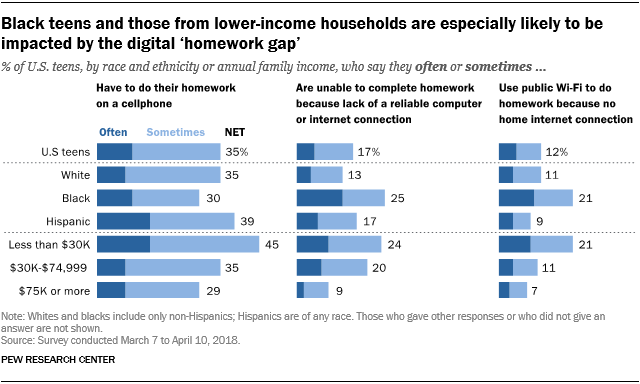 Teens also differ by income level when it comes to completing assignments: 24% of teens whose annual family income is less than $30,000 say the lack of a dependable computer or internet connection often or sometimes prohibits them from finishing their homework, but that share drops to 9% among teens who live in households earning $75,000 or more a year.

Other times, teens who lack reliable internet service at home say they seek out other locations to complete their schoolwork: 12% of teens say they at least sometimes use public Wi-Fi to complete assignments because they do not have an internet connection at home. Again, this problem is more prevalent for black or less affluent teens. Roughly one-in-five black teens (21%) report having to at least sometimes use public Wi-Fi for this reason, including 10% who say they often do so. And teens whose family income is below $30,000 a year are far more likely than those whose annual household income is $30,000 or higher to say that they do this (21% vs. 9%).

Lastly, 35% of teens say they often or sometimes have to do their homework on their cellphone. Although it is not uncommon for young people in all circumstances to complete assignments in this way, it is especially prevalent among lower-income teens. Indeed, 45% of teens who live in households earning less than $30,000 a year say they at least sometimes rely on their cellphone to finish their homework.

These findings reflect a broader discussion about the digital divide’s impact on America’s youth. Numerous policymakers and advocates have expressed concern that students with less access to certain technologies may fall behind their more digitally connected peers. There is some evidence that teens who have access to a home computer are more likely to graduate from high school when compared with those who don’t.

The Center’s survey of teens does show stark differences in teens’ computer access based on their household income. A quarter of teens whose family income is less than $30,000 a year do not have access to a home computer, compared with 4% of those whose annual family income is $75,000 or more.

As schools close due to the coronavirus, some U.S. students face a digital ‘homework gap’
The numbers behind the broadband 'homework gap'
Digital divide persists even as lower-income Americans make gains in tech adoption
59% of U.S. parents with lower incomes say their child may face digital obstacles in schoolwork
What we’ve learned about Americans’ views of technology during the time of COVID-19
Biden Nears 100-Day Mark With Strong Approval, Positive Rating for Vaccine Rollout
What the data says about gun deaths in the U.S.
Quiz: Are you a Core Conservative? A Solid Liberal? Or somewhere in between?
What We Know About Gen Z So Far
Most Democrats and Republicans Know Biden Is Catholic, but They Differ Sharply About How Religious He Is