Racial and ethnic minorities accounted for 20% of all public elementary and secondary school teachers in the United States during the 2015-16 school year, according to data from the National Center for Education Statistics (NCES). That makes teachers considerably less racially and ethnically diverse than their students – as well as the nation as a whole.

By comparison, 51% of all public elementary and secondary school students in the U.S. were nonwhite in 2015-16, the most recent year for which NCES has published data. And 39% of all Americans were racial or ethnic minorities that year, according to U.S. Census Bureau population estimates. (Younger Americans are a more racially and ethnically diverse group than older people.)

In addition, considerable shares of teachers were nonwhite in schools with higher percentages of students eligible for free or reduced-price lunch. (Such eligibility is often used as a proxy measure for lower household income.) Nonwhites represented 34% of teachers in schools where at least three-quarters of students were eligible for free or reduced-price lunch. In schools where a quarter or fewer students were eligible, just 11% of teachers were nonwhite. 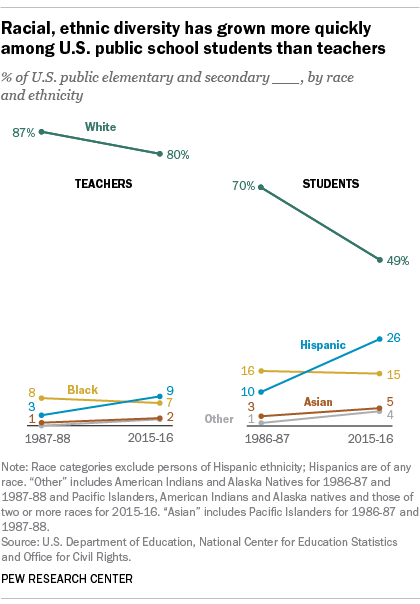 The share of Asian public school teachers has also grown steadily. Between 1987-88 and 2015-16, the number of Asian teachers roughly quadrupled, from 21,000 to 86,000. (Broadly, the Asian and Hispanic populations in the U.S. have grown dramatically in recent decades. In fact, they were the nation’s first and second fastest-growing racial or ethnic groups between 2015 and 2016.)

Meanwhile, the pattern in racial and ethnic diversity among principals is similar to that of teachers. Nonwhites made up 20% of U.S. public school principals in 2015-16, a share that has grown since 1987-88, according to another NCES survey. Much of this growth can again be attributed to Hispanics and Asians, who have both doubled in number. Though Hispanics and Asians still account for very small shares of all principals (8% and 1%, respectively), they accounted for much of the growth among principals since 1987-88.

Growth in racial and ethnic diversity has been much faster among U.S. students than among both teachers and principals in recent years. During the 1986-87 school year (the earliest year with comparable data), three-in-ten students were nonwhite, but that share increased sharply over the next three decades. Growth has been especially fast among Hispanic students, from 10% of students in 1986-87 to 26% in 2015-16.

It’s worth pointing out that U.S. public school teachers look different from students not just in terms of race and ethnicity, but in terms of gender. In 2015-16, roughly three-quarters of all elementary and secondary teachers were women, while students are nearly evenly split between boys and girls.

For this analysis, “nonwhite” in the 1986-87 and 1987-88 school years includes blacks, Hispanics and Asians (including Pacific Islanders), as well as Native Americans and Alaska natives. Due to methodological changes in NCES data, “nonwhite” in 2015-16 also includes people of two or more races, while Pacific Islanders were counted in a separate category from Asians.