Generation X, Millennials and the post-Millennial generation make up a clear majority of voting-eligible adults in the United States, but if past midterm election turnout patterns hold true, they are unlikely to cast the majority of votes this November. Not only are younger adults less likely to participate in midterm elections, but Millennials and Gen Xers have a track record of low turnout in midterms compared with older generations when they were the same age.

As of April 2018 (the most recent data available), 59% of adults who are eligible to vote are Gen Xers, Millennials or “post-Millennials.” In the 2014 midterm election, which had a historically low turnout, these younger generations accounted for 53% of eligible voters but cast just 36 million votes – 21 million fewer than the Boomer, Silent and Greatest generations, who are ages 54 and older in 2018.

Since 2014, the number of voting-eligible Gen Xers, Millennials and post-Millennials has increased by 18 million. Some of this increase stems from Gen Xers and Millennials who have naturalized and become U.S. citizens. But the bulk of it is due to the addition of 15 million adult post-Millennials (18 to 21 years old) who are now voting age.

The generational makeup of the electorate matters because, as Pew Research Center surveys have shown, generational differences in political preferences are now as wide as they have been in decades. For example, among registered voters, 59% of Millennials affiliate with the Democratic Party or lean Democratic. About half of Boomers (48%) and 43% of the Silent Generation identify as or lean Democratic.

Whether Gen X and younger generations will be the majority of voters in the November midterms will depend on how many of those who are eligible actually turn out to vote. In the 2016 presidential election, Gen X and younger generations were a majority of voters. But turnout in midterm elections tends to be significantly lower than in presidential elections, particularly among younger adults.

In the 2014 midterm election, only 39% of Gen Xers who were eligible turned out to vote, as did a significantly smaller share of eligible Millennials (22%). It’s important to note, however, that the 2014 election is not representative of all midterms, as only 42% of all eligible voters reported voting – the lowest turnout in a midterm election since consistent data have been available. 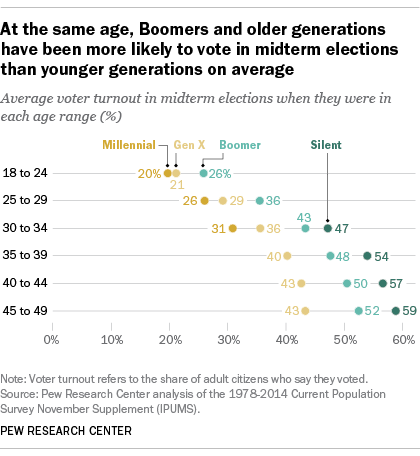 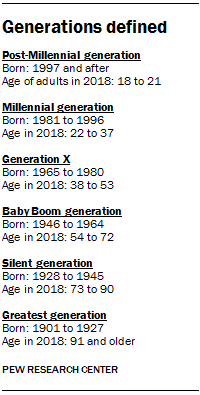 These generational comparisons over time are rough at best, however, as each midterm election has its own unique set of issues and national conditions which undoubtedly influence overall turnout.

What do these patterns tell us about potential turnout in the 2018 midterm elections?

If past turnout patterns hold – and taking into account that each generation has aged four years since 2014 – the data suggest that Gen Xers, Millennials and post-Millennials would not be a majority of voters in 2018. More specifically, extending the historical trends forward, one would expect roughly 47 million of the votes cast in 2018 would come from these three younger generations (up from 36 million in 2014), compared with 55 million votes cast by Boomer and older voters.

The analytical catch: There are, of course, no guarantees the past will repeat itself. If the younger generations were to turn out to vote at the rates Boomers did when they were younger, post-Millennials, Millennials and Gen Xers would account for the majority of votes.

Turnout depends on myriad factors, including voter engagement, and therefore these calculations are not projections of the generational turnout this November. Rather, this analysis demonstrates, based on past midterm voting behavior, how the changing generational composition of the electorate could impact voting dynamics going forward.