The U.S. House of Representatives has one voting member for every 747,000 or so Americans. That’s by far the highest population-to-representative ratio among a peer group of industrialized democracies, and the highest it’s been in U.S. history. And with the size of the House capped by law and the country’s population continually growing, the representation ratio likely will only get bigger.

In the century-plus since the number of House seats first reached its current total of 435 (excluding nonvoting delegates), the representation ratio has more than tripled – from one representative for every 209,447 people in 1910 to one for every 747,184 as of last year. 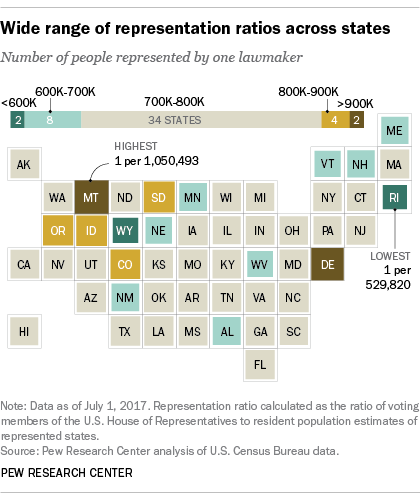 That ratio, mind you, is for the nation as a whole. The ratios for individual states vary considerably, mainly because of the House’s fixed size and the Constitution’s requirement that each state, no matter its population, have at least one representative. Currently, Montana’s 1,050,493 people have just one House member; Rhode Island has slightly more people (1,059,639), but that’s enough to give it two representatives – one for every 529,820 Rhode Islanders.

The U.S. findings in this post are based on Pew Research Center analyses of House membership changes since 1789 and historical population data (actual when available, estimated when not). They exclude territories, the District of Columbia and other U.S. possessions that don’t have voting representation in the House. The analysis was complicated somewhat by the fact that new states often were admitted after a decennial census but before the apportionment law based on that census took effect (usually about three years afterward). In such cases, the new states were analyzed as if they had been states at the time of the census.

How the House reached 435

The first Congress (1789-91) had 65 House members, the number provided for in the Constitution until the first census could be held. Based on an estimated population for the 13 states of 3.7 million, there was one representative for every 57,169 people. (At the time, Kentucky was part of Virginia, Maine was part of Massachusetts, and Tennessee was part of North Carolina. Vermont governed itself as an independent republic, despite territorial claims by New York.)

By the time the first apportionment bill took effect in March 1793, Vermont and Kentucky already had joined the Union; the 15 states had a total population of 3.89 million. Since the apportionment law provided for 105 House members, there was one representative for every 37,081 people. (According to the Constitution at the time, only three-fifths of the nation’s 694,280 slaves were counted for apportionment purposes; using that method, the ratio was approximately one representative for every 34,436.)

For more than a century thereafter, as the U.S. population grew and new states were admitted, the House’s membership grew too (except for two short-lived contractions in the mid-1800s). The expansion generally was managed in such a way that, even as the representation ratio steadily rose, states seldom lost seats from one apportionment to the next. 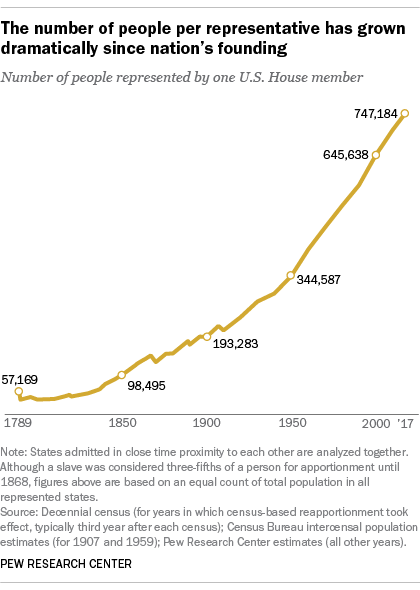 That process ran aground in the 1920s. The 1920 census revealed a “major and continuing shift” of the U.S. population from rural to urban areas; when the time came to reapportion the House, as a Census Bureau summary puts it, rural representatives “worked to derail the process, fearful of losing political power to the cities.” In fact, the House wasn’t reapportioned until after the 1930 census; the 1929 law authorizing that census also capped the size of the House at 435. And there it has remained, except for a brief period from 1959 to 1963 when the chamber temporarily added two members to represent the newly admitted states of Alaska and Hawaii.

There have been occasional proposals to add more seats to the House to reflect population growth. One is the so-called “Wyoming Rule,” which would make the population of the smallest state (currently Wyoming) the basis for the representation ratio. Depending on which variant of that rule were adopted, the House would have had 545 to 547 members following the 2010 census.

However, a recent Pew Research Center survey found limited public support for adding new House seats. Only 28% of Americans said the House should be expanded, versus 51% who said it should remain at 435 members. When historical context was added to the question, support for expansion rose a bit, to 34%, with the additional support coming mainly from Democrats.

How the U.S. compares globally

The House’s hefty representation ratio makes the United States an outlier among its peers. Our research finds that the U.S. ratio is the highest among the 35 nations in the Organization for Economic Cooperation and Development, most of them highly developed, democratic states. 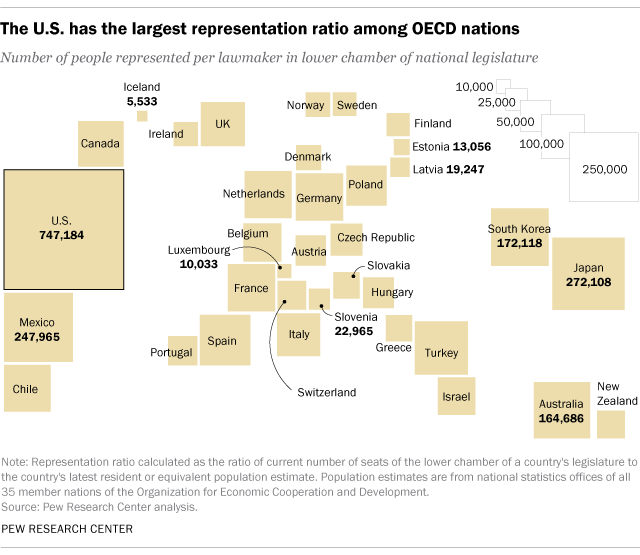 We took the most recent population estimate for each OECD nation and divided it by the current number of seats in the lower chamber of each national legislature (or, in the case of unicameral bodies, the single chamber). After the U.S., the two countries with the highest representation ratios are Japan (one lawmaker for every 272,108 Japanese) and Mexico (one for every 247,965 Mexicans). Iceland had the lowest ratio: one member of the Althing for every 5,500 or so Icelanders.

While much of the cross-national disparity in representation ratios can be explained by the big population of the U.S. (with more than 325 million people it’s the largest country in the OECD), that’s not the only reason. Eight OECD countries have larger lower chambers than the U.S. House, with Germany’s Bundestag topping the league table with 709 members. The British House of Commons has 650 MPs (Members of Parliament); Italy’s Chamber of Deputies has 630 lawmakers.

Even if Congress decided to expand the size of the House, the large U.S. population puts some practical limits on how much the representation ratio could be lowered. If the House were to grow as large as the Bundestag, for instance, the ratio would fall only to one representative per 458,428 people. In order to reduce the ratio to where it was after the 1930 census, the House would need to have 1,156 members. (That would still be smaller than China’s National People’s Congress, the largest national legislature in the world with 2,980 members.)