President Donald Trump will deliver his first State of the Union address on Tuesday – a speech that millions of Americans will watch closely. Earlier this month, about three-in-ten (31%) said in a Pew Research Center survey that this year’s speech is “more important” than those in past years, compared with 18% who said it is less important (43% said it’s about as important as past State of the Union addresses). Here is a look at public opinion on important issues facing the country, drawn from the Center’s recent surveys: 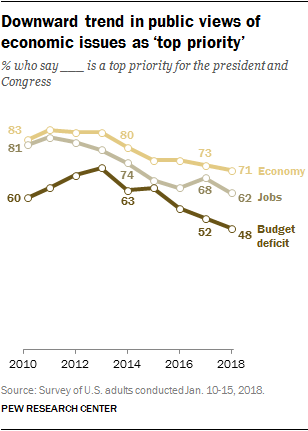 The economy and jobs: Americans’ views of economic conditions are more positive than they have been in recent years. An October survey found 41% of Americans rating economic conditions in the country as “excellent” or “good,” near the highest point in a decade. The public’s improving economic outlook is reflected in its policy agenda for Trump and Congress in the coming year. Economic issues – improving the job situation, strengthening the economy and reducing the budget deficit – are now viewed as less important policy priorities than they were just a few years ago, according to a survey conducted earlier this month.

The public’s view of local job availability has also improved substantially in recent years. In October, half of Americans said there are plenty of jobs available in their communities – the highest assessment in Pew Research Center surveys dating to 2001. Despite the public’s brighter outlook on jobs, however, there has been little change in the share of Americans (49%) who say their family’s income is falling behind the cost of living.

2Taxes: The public has mixed expectations for the tax law recently passed by Congress and Trump. About as many say the law will have a mostly positive effect on them and their families (29%) as say its effect will be mostly negative (27%). A third of U.S. adults expect the law to not have much personal impact. Views also are split on how the law will affect the country as a whole, with 35% saying it will positively impact the nation and 40% anticipating a mostly negative effect. Just 15% say the law won’t have much effect on the country. These views vary by party and income. Those with higher incomes are more likely to say they will personally benefit from the new tax law.

Terrorism and global threats: Defending against terrorism continues to rank among the public’s leading priorities for the president and Congress, with nearly three-quarters (73%) saying it is a top priority.

Americans’ views of the campaign against ISIS specifically have sharply improved. Last fall, a majority of Americans (55%) said for the first time that the campaign against Islamic militants in Iraq and Syria is going well, up from just 31% a year earlier, with Republicans and Republican-leaning independents driving much of the overall increase. The public approves of the campaign overall (69%), but Americans have mixed views on whether it has made much difference on the chances of a terrorist attack in the United States. Similar shares of Democrats and Democratic leaners (46%) and Republicans and GOP leaners (47%) said the campaign has not made much difference. (Note: All further references to parties include leaners.)

Majorities in both parties agree that ISIS, North Korea’s nuclear program and cyberattacks from other countries pose “major threats” to the U.S., according to a survey conducted in October 2017. But there are partisan differences on other perceived threats. For example, Democrats are far more likely than Republicans to see Russia’s power and influence as a major threat (63% vs. 38%). The large partisan gap on views of Russia only emerged after the 2016 presidential election. For several years before that, Republican and Democratic views about the threat posed by Russia were generally similar.

4Foreign policy: The public is evenly divided over whether the U.S. should “be active in world affairs” or “pay less attention to problems overseas and concentrate on problems here at home” (47% each), according to a July 2017 survey. The share favoring U.S. global involvement has increased from 35% in 2014, the last time this question was asked. A partisan gap has emerged on this question as Democrats increasingly say the U.S. should play an active role globally (56% say this, up from 38% in 2014).

Immigration: Most Americans say immigrants strengthen the country with their hard work and talents (65%), rather than say that immigrants burden the country by taking jobs and other resources. Public views of immigrants have moved in a more positive direction over the past several years.

Two issues central to the current immigration debate – the status of immigrants brought to the U.S. illegally as children and expansion of the U.S.-Mexico border wall – have very different patterns of support among the public. Nearly three-quarters of U.S. adults (74%) favor granting permanent legal status to immigrants brought here illegally as children, and just 37% favor substantially expanding the wall along the U.S.-Mexico border.

6Trade: Amid negotiations over the quarter-century-old North American Free Trade Agreement (NAFTA), Americans generally express positive views of the trade pact. Most Americans (56%) say that, all in all, the agreement is good for the U.S., according to an October survey. But Republicans are more likely than Democrats to say the pact is bad for the U.S. (54% vs. 18%), and to say that it benefits Mexico more than the United States. In recent years, partisans have moved apart in their assessments of free trade agreements in general, as Republicans have generally grown more negative in their views.

The same survey found that 69% of Americans say the federal government should play a major role in ensuring access to health care. Yet only 36% say the government is doing a very or somewhat good job at ensuring health care access, down from 56% in 2015. 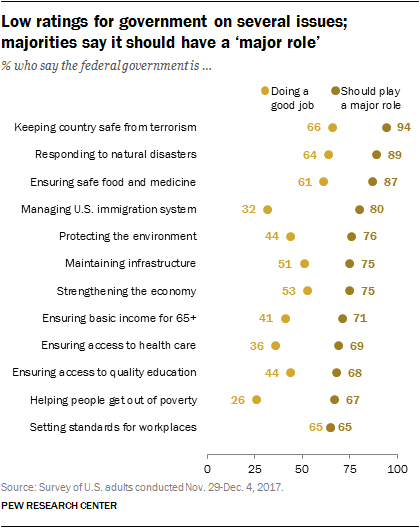 8Regulation: Half of the public says government regulation of business is necessary to protect the public interest, while 45% say it usually does more harm than good. Views on this question have been split for several years as partisan divides have grown wider. Democratic support for business regulation is now higher than it was during much of the 1990s and 2000s. As of July 2017, two-thirds of Democrats (66%) say government regulation is necessary to protect the public interest, while just 31% of Republicans say the same. When it comes to government’s role on specific issues, such as ensuring safe food and medicine, large majorities say the government should play a “major role.”

9Environment: While partisans agree on some assessments of what Trump and Congress’ top priorities are, climate change and the environment are among the most divisive. Nearly seven-in-ten Democrats (68%) say dealing with climate change should be a top policy priority, 50 percentage points higher than the share of Republicans who say so (18%). And while 81% of Democrats say protecting the environment should be a top priority, just 37% of Republicans say the same. 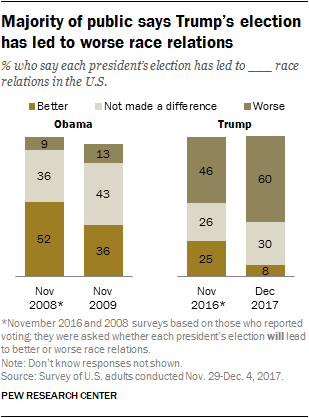