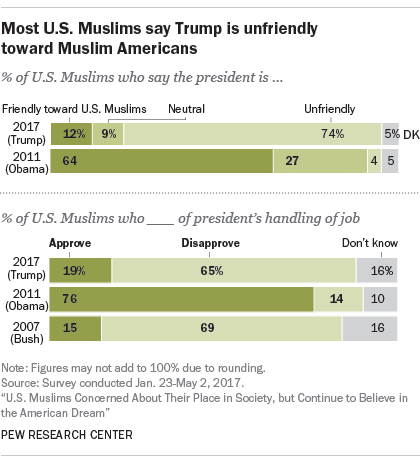 About three-quarters of Muslim Americans (74%) say President Donald Trump is unfriendly toward them, according to a new Pew Research Center survey. And they are no fans of Trump’s: Just 19% say they approve of the job Trump is doing as president, and among Muslims who reported voting last November, only 8% say they cast their ballots for him.

These findings come as the Supreme Court weighs Trump’s executive order blocking travel from several Muslim-majority countries, which the president originally signed shortly after his inauguration. But the tension has been building for much longer. Trump’s relationship with Muslims and Islam has been a point of media focus since before he called for a “total and complete shutdown of Muslims entering the United States” in December 2015 – one of a number of controversial statements then-candidate Trump made about Muslims and Islam.

Most Muslim Americans (64%) also say they are dissatisfied with the way things are going in the U.S. – a sharp rise since the Center’s last comprehensive survey of U.S. Muslims in 2011, when just 38% took this position and 56% said they were satisfied with the country’s direction. In stark contrast with their current feelings about Trump, most Muslims in 2011 approved of the job Barack Obama was doing as president (76%) and very few said he was unfriendly toward their group (4%). 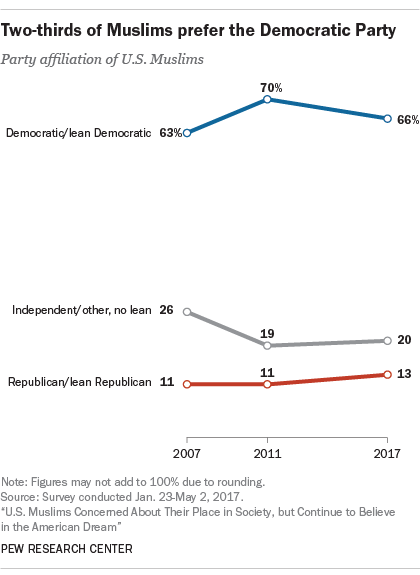 But while Trump’s election may have been a turning point for U.S. Muslims in some ways, the group’s political views have been consistent by other measures. For instance, Muslim Americans have strongly favored the Democratic Party for at least a decade. Two-thirds of Muslims (66%) now identify with or lean toward the Democrats, similar to the share who said this in both 2011 (70%) and 2007 (63%).

As they did in 2016, Muslim voters backed Democratic presidential candidates in 2008 (Obama) and 2004 (John Kerry) by wide margins, according to our earlier surveys. And just as they broadly disapprove of Trump today, a similar share disapproved of the job Republican President George W. Bush was doing in 2007.

Muslims’ views on some specific political and social issues also have been relatively steady in recent years. As in 2011 and 2007, a large majority (79%) say immigrants are an asset rather than a burden to the United States. (Indeed, most U.S. Muslims – 58% – are immigrants themselves.) And about two-thirds of Muslims say they favor a bigger government with more services (67%) over a smaller government with fewer services (25%). Again, views on this question have changed little over the past 10 years.

For more findings on Muslim Americans and politics, see the full report – especially Chapter 3 and Chapter 4.