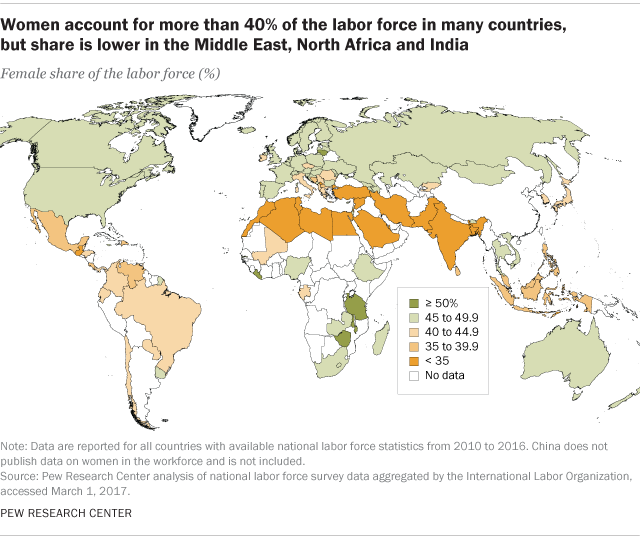 The analysis comes as countries around the world prepare to mark International Women’s Day, which this year places the focus on gender equality in work. According to the United Nations, factors such as a fair division of wages and unpaid labor (e.g., cooking, child care) are necessary for meeting this goal; another essential factor is having an equal share of men and women in the labor force. The labor force consists of workers either with jobs or looking for work.

In the United States, women account for 46.8% of the labor force, a share that is projected to fall slightly in the decades ahead. This gender gap translates to roughly 10.3 million more men than women in the workforce. And although the share of female workers in the U.S. is higher than the median across the 114 countries the Center examined, 39 other countries outrank the U.S.

The five countries with the highest female shares are all in sub-Saharan Africa. In Zimbabwe, Malawi, the Gambia, Liberia and Tanzania, women account for at least 50% of the workforce. And in all of the sub-Saharan countries with data available, at least 40% of the labor force is female. However, women in this region are especially likely to be in informal employment, relative to men. These jobs are not regulated by the government and often have lower and less stable incomes.

Outside of sub-Saharan Africa, the only country in which women represent half or more of the workforce is Lithuania. In most European Union countries, the labor force is at least 45% female. Malta (38.6%) is the most notable exception.

Countries in the Middle East and North Africa generally have the least gender parity in their labor force. In fact, the six countries with the smallest shares of female workers are all from this region: the Palestinian territories, Algeria, Iran, Saudi Arabia, Syria and Qatar. Israel (47.3%) is the only country in the Middle East where women account for more than 35% of the labor force.

Countries in South and Central Asia also have relatively low percentages of female workers. India and Pakistan are both among the bottom 10 countries with available data. However, Bhutan (46.7%) and Kazakhstan (48.8%) are in the top half of the countries examined, and the female share of the labor force in these countries roughly matches or exceeds the female share in the U.S.

Like the U.S., Canada (47.3%) has a relatively high proportion of women in the workforce. Five countries in the Western Hemisphere have an even larger percentage of female workers, though: French Guiana, an overseas region of France (48.0%); Bermuda (48.7%) and the Cayman Islands (48.8%), both British overseas territories; and the Bahamas (49.5%) and Barbados (49.7%).

In roughly half of the countries with recent labor force surveys, data are also available for the number of women and men in managerial positions. These positions include, for example, chief executives and legislators, as well as administrative and retail managers. The countries that collect this data have a slightly higher percentage of female workers overall (a median of 46.4%), but only about one-third of managers in these countries are women (a median of 31.6%).