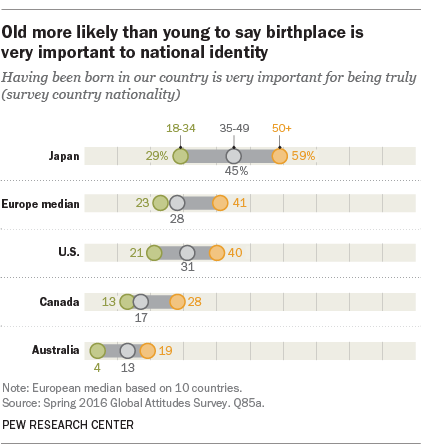 Across a number of countries that are wrestling with the politics of national identity, younger people are far more likely than their elders to take an inclusive view of what it takes for people to be truly considered “one of us” – whether the measure is being born in their country, sharing local customs and traditions or being Christian.

Among 18- to 34-year-olds in European Union countries surveyed, a median of 23% say being born in one’s country is very important to national identity. Four-in-ten of those ages 50 and older agree, according to a Pew Research Center survey conducted last spring. The divide between the young and the old over birthright nationality is quite wide in certain European countries: 21 percentage points in the United Kingdom and 16 points each in Greece and Spain.

In the U.S., there is a 19-point division between the youngest and oldest adult generations. And, while only 19% of older Australians say birthplace is very important to nationality, just 4% of Australian millennials accord such importance to being born in Australia.

Among Japanese, there is a 30-percentage-point generation gap on the link between national identity and place of birth: 59% of older Japanese say it is very important to have been born in their country to be truly Japanese, while only 29% of younger Japanese agree. 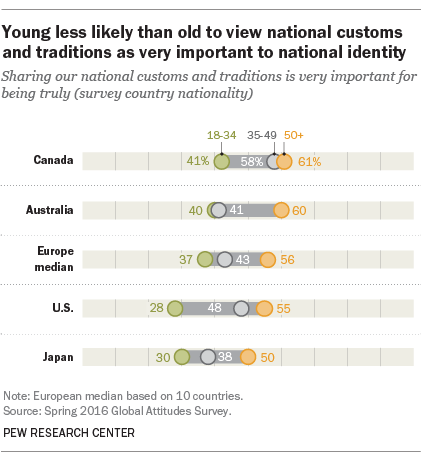 Views on the importance of culture to national identity also split along generational lines. A majority (55%) of older Americans but only 28% of younger adults believe it is very important that a person share U.S. national customs and traditions to be truly American. There is a similar 20-point generation gap in Australia, Canada and Japan.

A median of 37% of 18- to 34-year-olds in the EU say that sharing national customs and traditions is very important to being a true national. And 56% of those ages 50 and older agree. The generational divide over the importance of culture to national identity is larger in some European countries: the UK (24 percentage points), France (23 points) and Greece (21 points). 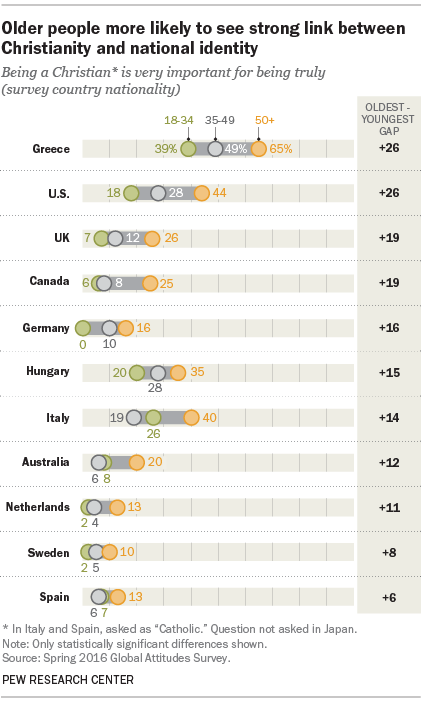 Christianity is the dominant religion in all of the countries surveyed except Japan. In these predominantly Christian countries, older people are generally much more likely than younger ones to link national identity to being Christian.

In both Greece and the U.S., people ages 50 and older are significantly (26 points) more likely than people ages 18 to 34 to say that being Christian is very important to being truly “one of us.” There is a similar 19-point generation gap in Canada and the UK, a 16-point difference of opinion in Germany, a 15-point divide in Hungary and a 14-point one in Italy. Notably, only in Greece (65% of those ages 50 and older) does a majority of any age group believe it is very important for one to be Christian to be a true national.