Deadly encounters between police and black citizens in recent years have led to a vigorous debate across the U.S. over police conduct and methods. A new Pew Research Center nationwide survey of 7,917 police officers in departments with at least 100 officers, conducted by the National Police Research Platform, focuses on a wide range of topics about policing, including how police view their jobs, officers’ experiences in the field and how these fatal encounters have impacted the way they do their jobs.

Here are key takeaways from the new report.

Most officers – 86% – say high-profile incidents between blacks and police have made their jobs harder. Roughly nine-in-ten (93%) say officers in their department have become more concerned about their safety, while about three-quarters say that their colleagues are more reluctant to use force when appropriate or to stop and question people who seem suspicious. Three-quarters also say that interactions between police and blacks have become more tense.

2Black and white officers differ over perceptions of fatal encounters and ensuing protests. About seven-in-ten white officers (72%) say that the deaths of blacks during encounters with police are isolated incidents rather than signs of a broader problem. By contrast, 43% of black officers say these are isolated incidents, while 57% say they are signs of a broader problem.

When it comes to the protests that have often followed these deadly encounters, white officers are more skeptical of the protesters’ motives: Only 27% say at least some of the motivation for these protests is a genuine desire to hold officers accountable for their actions. Among black officers, 69% see this as a motivating factor.

And on the issue of race relations more generally, white and black officers have profoundly different views: While 92% of white officers say the country has made the changes needed to give blacks equal rights with whites, only 29% of black officers agree.

Police work is marked by conflicting experiences and emotions. While about six-in-ten officers (58%) say they nearly always or often feel proud about their work, about half (51%) say it always or often makes them feel frustrated.

4While physical confrontations are not part of the daily routine, a third of officers say they have struggled or fought with a suspect resisting arrest in the past month. Whether they’ve struggled with a suspect or not, the vast majority of officers say they have serious concerns about their physical safety at least sometimes when they are on the job. Some 42% say they nearly always or often have serious concerns about their safety and another 42% say they sometimes have these concerns. 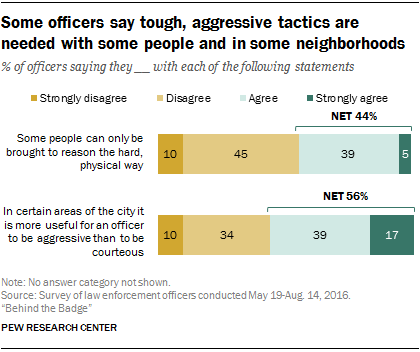 Police see value in knowing the people and places they patrol, but are divided when it comes to the use of more aggressive tactics. More than nine-in-ten officers say it is at least somewhat important to have a detailed understanding of the people, places and culture in the area where they work in order to be effective at their jobs. And rather than viewing the neighborhoods where they work as hostile territories, about seven-in-ten say at least some of the residents share their values.

But a narrow majority (56%) agree that in certain areas of the city it is more useful for an officer to be aggressive than to be courteous. And a substantial share of officers (44%) agree that some people can only be brought to reason the hard, physical way. 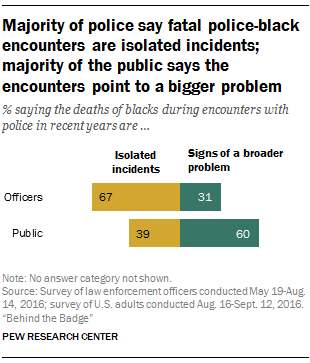 The opinions of police and the public also differ on some important issues facing the country. While a majority of the police and public support some gun control measures, roughly one-third of police (32%) but 64% of the public favor banning assault-style weapons. And while 67% of officers say the deaths of blacks in recent encounters with police are isolated incidents, less than half of the public (39%) shares this view.