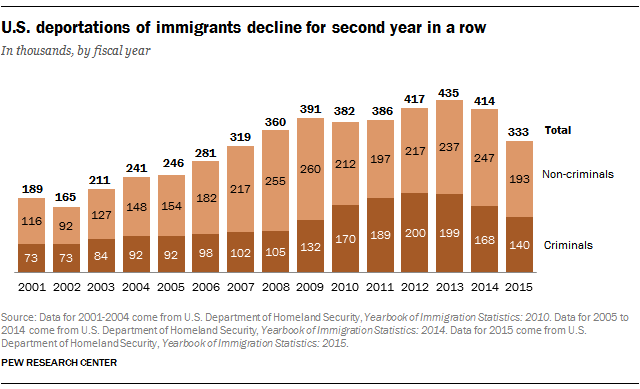 The Obama administration deported 333,341 unauthorized immigrants in the 2015 fiscal year, a decline of about 81,000 (or 20%) from the prior year, according to newly released data from the Department of Homeland Security. The number of deportations fell for the second year in a row and reached its lowest level since 2007, during the George W. Bush administration.

One reason for the decline in apprehensions in recent years is an overall decrease in the number of immigrants (both legal and unauthorized) coming to the U.S., especially from Mexico. (A Pew Research Center analysis shows that between 2009 and 2014 more Mexicans were returning home to Mexico than were arriving in the U.S.) Meanwhile, stricter border enforcement by the U.S. has also played a role in this trend.

The Obama administration recently changed its deportation enforcement priorities, focusing exclusively on those who have been convicted of a crime; those deemed a threat to the public safety; and those who have recently crossed the border. Last year (2015) marked a major shift on this front, with those convicted of an aggravated felony making up 81% of all convicted criminals deported by U.S. Immigration and Customs Enforcement, up from 51% in fiscal 2014. This change, along with a low level of cooperation from state and local law enforcement agencies, also may have contributed to the decline in the number of criminal deportations in fiscal 2015.

U.S. immigration policy was one of the most discussed issues in this year’s presidential campaign, with Donald Trump making it a key part of his campaign. After his election, President-elect Trump has said he will deport 2 to 3 million immigrants with prior criminal convictions living in the U.S.