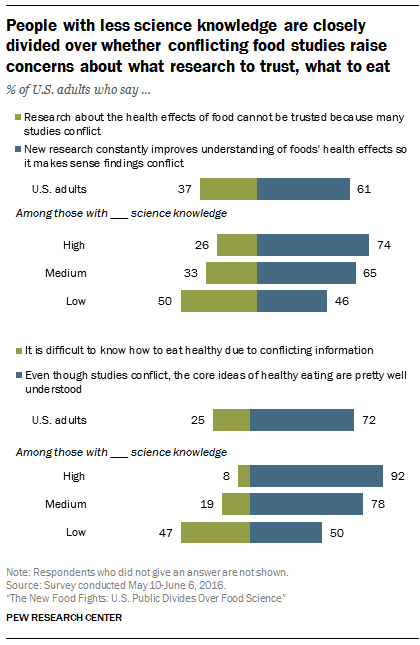 Is caffeine good or bad for your heart? Are there health benefits in becoming a vegetarian? What makes some fats – like the trans and saturated kinds – an unhealthy choice, while other fats are considered an essential part of healthy eating?

With a dizzying number of research studies and news stories about healthy eating, a key question arises: Are people able to make sense of these studies or does conflicting research lead to more confusion and even distrust?

A new Pew Research Center survey asked Americans a series of questions about their exposure to news about the health effects of food and found that, while a majority of Americans at least sometimes encounter conflicting news stories about this topic, most people see it as a sign of continued progress in food science. But how Americans make sense of conflicting food studies in the news depends on their own knowledge of science.

Despite the varying findings of food studies in the news, most Americans also say they have a handle on what constitutes a healthy diet, but this too varies by science knowledge. About seven-in-ten U.S. adults (72%) say that even though new studies sometimes conflict with prior findings, “the core ideas about how to eat healthy are pretty well understood.” A smaller share (25%) feels overwhelmed by the inconsistent findings, saying, “It is difficult to know how to eat healthy because there is so much conflicting information.”

While a vast majority (92%) of those with high science knowledge say they understand the core principles of healthy eating, people with low science knowledge are closely divided on this. Among those with low scientific knowledge, 50% say the core ideas of healthy eating are pretty well understood, while a similar share (47%) say it’s difficult to know what to eat because of conflicting information.