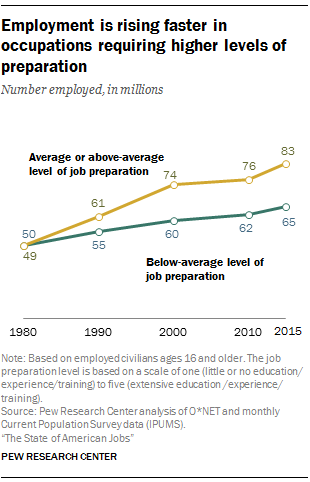 The employment landscape in the U.S. has undergone profound changes, and the public is adapting to the new realities of the workplace and rethinking the skills they need to compete. A new Pew Research Center survey, conducted in association with the Markle Foundation, and analysis of government data finds that employment in occupations requiring more education and training is on the rise, and many workers are realizing that retraining and upgrading their skills needs to be a lifetime commitment.

Here are six key takeaways on the state of American jobs:

1Employment has been rising faster in occupations requiring more preparation. As of 2015, some 83 million people worked in jobs that require an average or above average level of preparation (including education, experience and job training), up from 49 million in 1980 – a 68% increase. This was more than double the 31% rise in employment in positions requiring a below average level of job preparation. Employment in these jobs increased from 50 million to 65 million over the same time period. 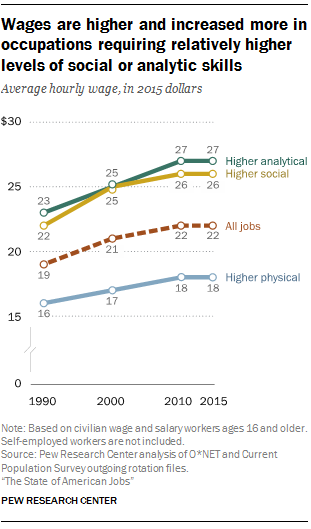 3The majority of American workers say they will need continuous training to keep up with changes in the workplace, and many say they do not have the skills they need to get ahead. Some 54% of adults in the labor force say that it will be essential for them to get training and develop new skills throughout their work life in order to keep up with changes in the workplace. An additional one-third say this would be important but not essential. Those with the highest levels of education are the most likely to say this will be essential.

About a third of workers (35%) say they do not currently have the education and training they need to get ahead. Yet many are trying to do something about it: 45% of employed adults report they have pursued extra training to maintain or improve their job skills in the past year.

4The public has mixed views on the value of higher education in preparing people for the workplace. Many of those with associate or bachelor’s degrees say their own college experience was very useful for helping them grow personally and intellectually (62%), opening up job opportunities (53%) and providing them with useful job-related skills and knowledge (49%). 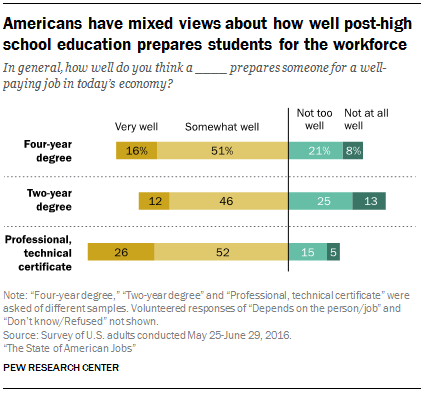 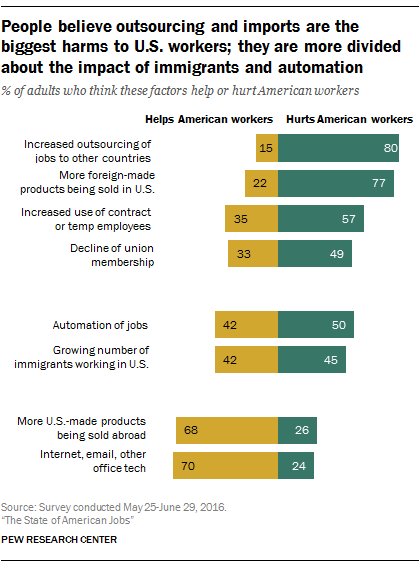 The public sees threats to workers from multiple fronts. For example, most Americans say that increased outsourcing of jobs to other countries (80%) and more foreign-made products being sold in the U.S. (77%) hurt American workers. Workers see automation as less of a threat. Large majorities see increased use of the internet and other technology in the workplace (70%) and more U.S.-made products being sold abroad (68%) as helping American workers.

New, emerging jobs and the green economy are boosting demand for analytical skills

How Americans see automation and the workplace in 7 charts