As Hillary Clinton seeks to become the first woman to win the presidency in U.S. history, the public is divided over whether women continue to face obstacles that make it more difficult for them to get ahead. 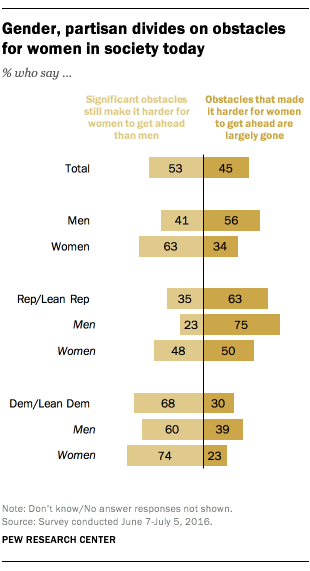 A 63% majority of women say obstacles continue to make it harder for women than men today, compared with 34% who say they are largely gone. Among men, 41% think women still face obstacles that make it harder to get ahead, while 56% say those challenges have mostly been eliminated. (For more on women in society, see the Center’s report “Women and Leadership,” released last year.)

Gender differences on the issue of women’s obstacles are also evident within the two party coalitions. Republican women are divided on the issue overall (48% say there are still obstacles, 50% say these challenges for women in getting ahead are largely gone), but they are more than twice as likely as Republican men (23%) to say there are still significant obstacles facing women today. 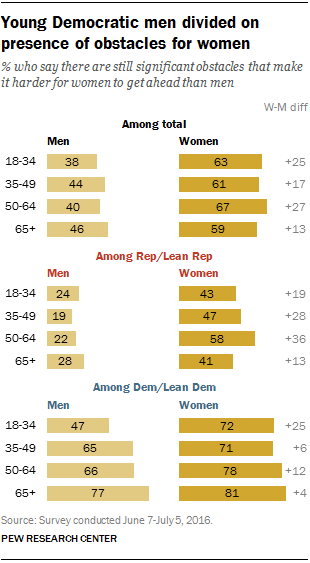 A similar, though less pronounced, pattern is evident among Democrats. While about three-quarters of Democratic women say there are still obstacles that make it harder for women to get ahead than men, a somewhat smaller majority of Democratic men (60%) say this.

There is a 25-percentage-point gender gap among younger Democrats over the presence of obstacles making it harder for women to get ahead (72% of Democratic women ages 18 to 34 say this vs. 47% of younger Democratic men). Gender differences are more modest among older Democrats.

However, Democratic men across all age groups, including those ages 18 to 34, are far more likely than their Republican counterparts to say there are still obstacles making it harder for women to get ahead. 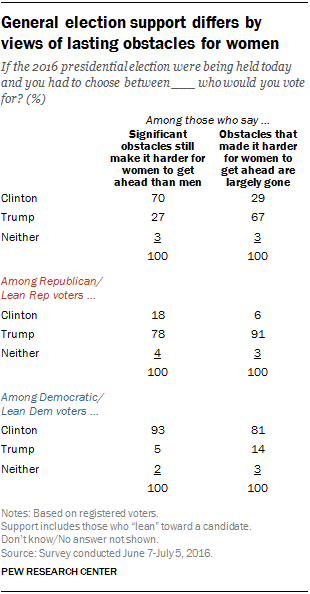 Across all age groups, no more than about a quarter of Republican men say obstacles make it harder for women to get ahead. Significantly higher shares of Republican women than men express this view, including 58% of GOP women ages 50 to 64.

Views on gender issues in society today are reflected in general election support in the presidential race. Seven-in-ten registered voters who say significant obstacles still make it harder for women to get ahead than men support or lean toward Hillary Clinton in the general election, while 27% express support for Donald Trump. Among voters who say such obstacles no longer exist, 67% support Trump while 29% back Clinton.