If the 2016 presidential debates move forward as planned, voters have some clear preferences about what issues they want to hear the candidates talk about more – or less – in those forums. Given the chance to decide how much time is spent on each issue, voters would allocate more time to discussions of the candidates’ plans on keeping the U.S. safe from terrorism and on economic growth and much less time to discussion of abortion policy. 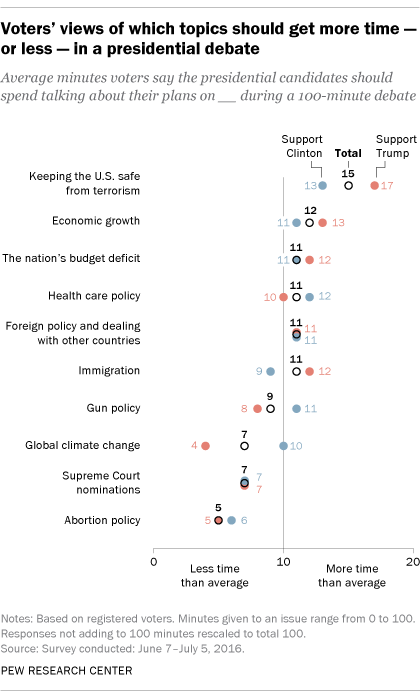 In a Pew Research Center American Trends Panel survey conducted in June, 3,767 registered voters were asked to imagine they were moderating a 100-minute national debate between Donald Trump and Hillary Clinton and to allocate that time across 10 issue areas.

On average, voters allocated 15 of a total 100 minutes to hearing the candidates’ plans for keeping the U.S. safe from terrorism. Just over half of voters (53%) earmarked more than 10 minutes to this topic, while only 18% gave it less than 10 minutes (29% gave it exactly 10 minutes).

Voters also say they would allocate somewhat more time on average to the candidates’ plans on economic growth (12 minutes), the nation’s budget deficit (11 minutes), health care policy (11 minutes), and foreign policy and dealing with other countries (11 minutes). There are modest differences between Trump and Clinton supporters in the time devoted to these topics, with Trump supporters generally setting aside a few more minutes for economic growth (13 vs. 11 minutes) and the deficit (12 vs. 11 minutes), and Clinton backers setting aside two more minutes than Trump supporters for health care (12 minutes vs. 10 minutes).

The pattern is roughly reversed for gun policy, with Clinton supporters allocating 11 minutes to the issue and Trump supporters allotting just eight minutes. In a separate survey also conducted in June, Trump supporters and Clinton supporters were about equally likely to say gun policy is very important for their vote in 2016. Though the overall allocation of debate minutes on most issues corresponds to the importance of these issues to their vote, there are some cases, like gun control, where this is not the case.

Overall, voters give less debate time for climate change (7 minutes), Supreme Court nominations (7 minutes) and abortion policy (5 minutes). Both Trump and Clinton supporters give less time than average to the Court and to abortion, but there is a wide partisan gap over hearing about global climate change. Clinton supporters would give it 10 minutes of the debate time, while Trump backers would give it just four minutes, including 44% who would give it zero minutes in the discussion (by comparison, only 13% of Clinton voters give it zero minutes).