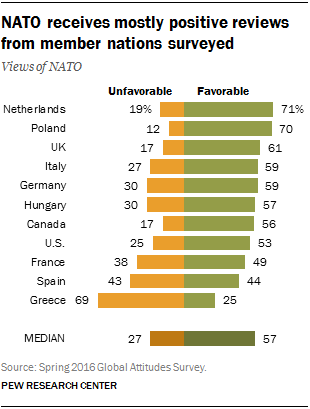 NATO members will hold a summit this week in Warsaw, Poland, at a time when the alliance is facing many challenges, including political uncertainty in Europe. But a spring 2016 Pew Research Center survey of nine EU nations, the U.S. and Canada finds positive views of the military alliance.

A median of 57% across the 11 NATO member countries surveyed voiced favorable views of the coalition, with only about a quarter (median of 27%) expressing negative opinions.

The alliance’s strongest support among the countries surveyed comes from the Dutch and Polish. However, an overwhelming majority of Greeks express negative views, setting them apart as the most critical member of NATO included in the survey. Meanwhile, Americans regard NATO favorably by a more than two-to-one margin. 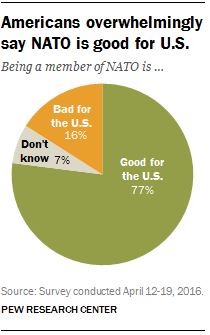 When asked if being a member of the post-World War II security alliance was good or bad for the U.S., 77% said it was a good thing. Only 16% said membership was a bad thing.

Presumptive Republican presidential nominee Donald Trump has raised questions about the relevancy of NATO. An April Pew Research Center survey of Americans found that those who supported him in the primaries were more likely than voters who supported the other candidates to express skepticism about NATO’s benefits to the U.S. Three-in-ten Republican and Republican-leaning registered voters who backed Trump in the primaries said being a member of NATO is bad for the U.S. Yet, a clear majority of his primary supporters still voiced the opinion that NATO membership is good for the country (64%). 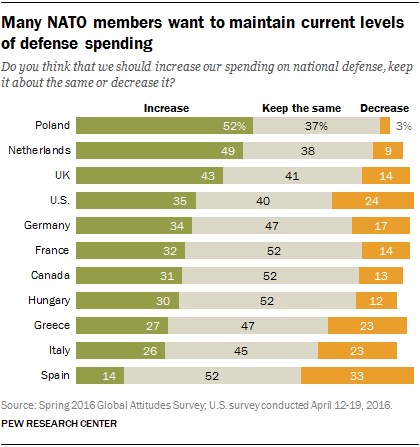 Despite growing security threats to member countries, most NATO members appear reluctant to boost their own countries’ military spending. About a third (median of 32%) across the NATO nations surveyed say their country should increase its national defense spending, while nearly half (median of 47%) want to keep spending the same and 14% favor decreasing defense spending.

Only in Poland (52%) and the Netherlands (49%) do roughly half favor increasing spending. Conversely, a third in Spain and about a quarter in Italy and Greece (both 23%) prefer that their country spend less.

Americans are torn between maintaining current spending (40%) and increasing the defense budget (35%). However, Republicans are much more likely to say they want the U.S. to increase defense spending (61%) compared with Democrats (20%) and independents (31%). 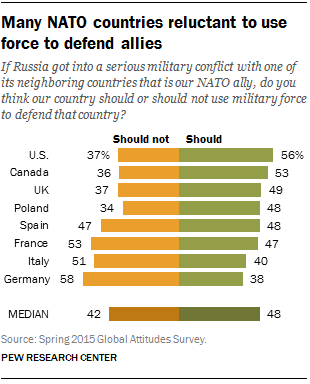 A spring 2015 Pew Research Center survey also raised questions about the willingness of people in a number of NATO nations to carry through with a key commitment to the alliance. Despite tensions with Russia growing out of the Ukraine conflict, NATO members polled were divided on whether their countries should provide military support to an ally if it got into a military conflict with Russia. A median of 48% across eight NATO nations said their country should use military force to defend allies, while 42% among these members are opposed to using force.

This sentiment across several NATO countries is notable because in Article 5 of the 1949 North Atlantic Treaty that created NATO, member states “agree that an armed attack against one or more of them in Europe or North America shall be considered an attack against them all.”

Note: See here for topline results from our spring 2016 survey and methodology.