Pew Research Center has been tracking data on religious restrictions in nearly 200 countries and territories since 2007, producing a series of annual reports that analyze religion-related social hostilities and government restrictions on religion.

Here are key findings from the latest report, which updates the data through 2014: 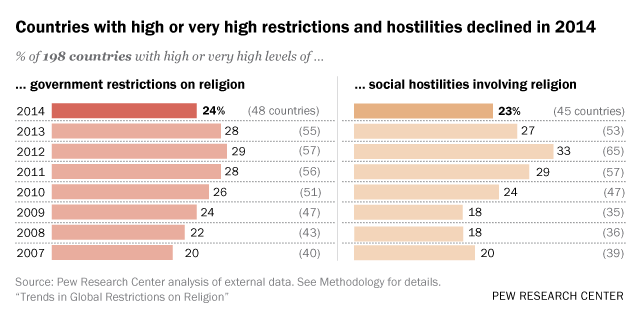 1Government restrictions on religion and social hostilities related to religion decreased somewhat between 2013 and 2014, the second consecutive year of decline. The share of countries with governments imposing high or very high levels of restrictions on religion dropped from 28% in 2013 to 24% in 2014. During the same period, the share of countries with high levels of social hostilities – those perpetrated by individuals or groups – also dropped, from 27% to 23%. (For more on the index used to determine these measures, see the full report.) 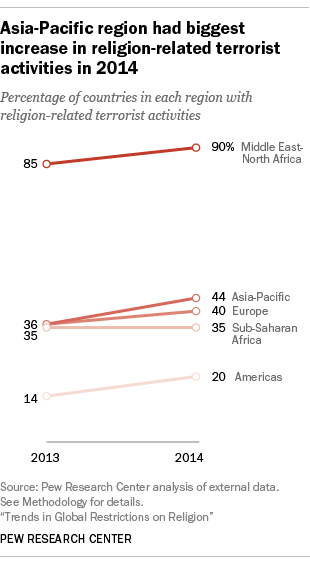 4Certain religious groups stick out as particular targets of restrictions and hostilities. There has been a marked increase in the number of countries in which Jews were harassed. Jews, who make up just 0.2% of the world’s total population, were harassed either by governments or social groups in 81 countries in 2014, up from 77 in 2013, 71 in 2012 and 51 in 2007. As in previous years, the world’s two largest religious groups faced harassment in the largest number of countries: Christians were harassed in 108 countries and Muslims in 100, up slightly from 102 and 99 respectively.