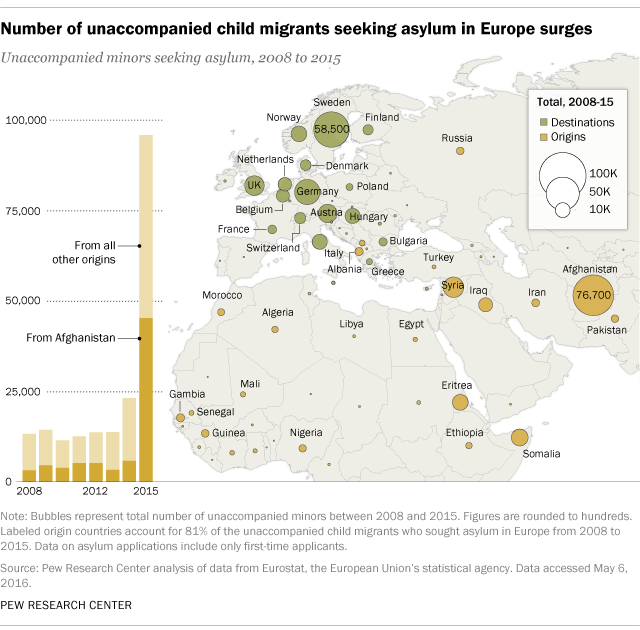 Men and women, old and young have all been part of the recent surge of asylum seekers into the European Union, Norway and Switzerland. But a lesser-known story about this surge is the rapid rise in child migrants traveling without an adult guardian.

Since 2008, about four-in-ten of Europe’s unaccompanied minors – 76,700, or 39% – have traveled from Afghanistan, about a 3,000-mile trip. That makes Afghanistan by far the single largest source country of unaccompanied minors in Europe since data became available. Unaccompanied minors also come from other far-flung places. Some 13,200 arrived from Somalia and another 11,600 have arrived from Eritrea since 2008. Travel from both countries requires navigating treacherous terrain and a perilous journey across the Mediterranean Sea. Other top countries of origin include places closer to Europe, including Syria (19,300 arrived since 2008) and Iraq (9,100), while some source countries are in continental Europe, including Albania (3,100) and Russia (2,700).

The British House of Commons is debating whether to accept more child migrants. Other European nations are also grappling with child migrant policies, as thousands of asylum seekers wait on Europe’s borders to enter.